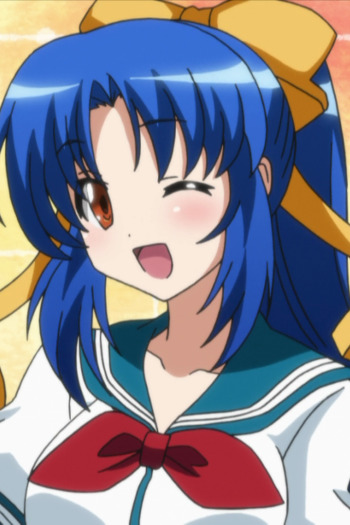 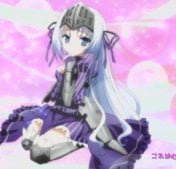 10/10 For best troll anime ever! This is epic. All random ecchi anime templates in one episode! New girl every 4 minutes, retarded main hero, stupid girls, every one of these properties is characteristic for all ecchi animes. Main protagonist's house, beach, hot springs... Just all! Perfect anime.

Warning!:Do not atempt to watch this Anime/OVA if your under 18-16 This anime contains a shitload of pornographic scene's-And WTF scenes.

Warning!: You wil be facepalming yourself!

Basacly the main protagonist a boy is left home alone any a maid/childhoodfrends/frends of frends come over.

From a regular ish first 3-5 minutes of animation this anime turns into a H-anime for the rest of the way whit a lot of types of people ( girls ) of course this anime has a story but you wil have to read the manga for it or really be able to get a lot of info from a short time of animation.

So If you like H-anime ( i dont hate em so i watch em ) watch it or if you just like WTF funny moments ^_^ be my guest.

PS: MOM WOULD YOU PLEASE BE QUIT! Jeez im trying to record a video..

I'd also recomend not to be watching this whit speakers of your family or neightbours wil hear it...

This anime has a lot of uhm naughty if youd like sounds and if some one walks into your room in the Fantasy moment yea.. well you could rewind the esode a little bit becauze its never an actualy scene its a fantasy ( dream ) so you can use it as an excuse XD,

I beleve there wil be a datingsim ( galge gal game ) visual novel for this anime/manga so look into thad when it comes out!

As we say in japan go hide under a rock watch anime do shit read manga and stuff and have a nice Otaku life!

It's like they wanted to tell a classic Harem/Ecchi story, but wanted to cut out all the "fluff" and condense it into one episode. They succeeded on that front, but in so doing they also cut out anything close to  meaningful progression/development or reasons to like/relate with the characters.

Story - There is none. There is no plot. There is no story structure here. No problem to overcome, no emotional pull, and most certainly no closure. This isn't anything more than a string of ecchi scenes thrown together.

Animation - Actually suprisingly decent. The art is beautiful in a lot of ways, and there's definitely attention to detail in the characters' movements. Unfotunately the primary reason to watch this (breasts) seem to have gotten the short-end of the metaphorical talent stick; they are misshapen or mis-angled in a good portion of the ecchi scenes, which makes them stand out against the otherwise good-looking art.

Sound - Pretty standard. Nothing to write home about, but also nothing upsetting. Voice Acting is pretty well done, too.

Characters - Only a slight bit better than the story. That is to say, they *are* characters and have character traits that uniquely identify them from each other, as well as distinct visual designs. That's about it, though. You have your standard cardboard-cutout MC who for some reason continually tries to reject the girls' advances, rendering his character as nothing but a string of "No"s and "Sorry"s. You then have 4 different takes on the "Girl falls for MC" trope, all falling somewhere in the Tsundere - Yandere spectrum ranging from "Hold me or else" to "I'll straight up kill you".

Overall - A really disappointingly mediocre anime. Nothing of substance to develop on, which itself isn't necessarily a bad thing - sometimes you just want good visuals without following a plot - but it suffers from a lack of follow-through on those visuals. There's really no reason to watch this unless you're some kind of completionist that wants to watch every anime tagged with "Borderline H".

Rescue Me? More like Rescue Me From All These Boners, amirite?

Shit, you see that page image? That is your story: Soft white skin, boobs and the lack thereof in the flat-chested gal and all kinds of sexy boner action. I mean, titties a bouncin' and maid- aprons, sexy nude aprons with the optional panties because sometimes, you just need that all natural feel of the fabric on your crotch. The butt is always left out there.

The actual plot of the guy's parents going overseas and leaving him to fend for himself is legit, that always happens to kids in Japan. Then 1 minute in, he walks in on a sexy girl in an apron cooking dinner or whatevs. She's a student at his school. His parents got her to watch over his nuts. It's stupid, but it is hentai and any sembalance of plot is there to get to the titties faster. The plot goes on to showcase how this guy gets all the bitches while his bro is left with Rosie and her five sisters.

But all the bitches don't all want MC's nuts, as the last one wants it for a totally different and not at all creepy reason because it actually is still pretty boners.

Basically, boners. Even fits in a beach episode.

The animation is fine and all and Demon MC has great animation but there's just so many flat-chested girls. I prefer my titties big, but there was just so many of them! It needed more big bazongas and some booty action. Asses be smacked more than once, jiggling of the glutes and some fine roundness of the nethers. But I will give it points for the finishes. He has horse blood in him.

There are voices and people talk. I think there is music because OVAs generally have music. Demon MC has a good voice.

Demon Haru (Or Demon MC) is absolutely great. Total sex fiend and makes the women all slaves to his balls. Forces them to write the declaration of dickadependance with his John Hancock.

Well... you got titties, student who is all perfect and wants his nuts. No Titties, student who wants his nuts and knows that her lack of a chest can't wrap around his shaft. Sister... Aunt... but still younger than him? It's really confusing but she's a loli twin-tailed younger sister aunt incestual relation thingamajig which is like a half dozen fetishes just for her existence. Fourth is all for the loli aunt sister gal but will totally go with MC because he gets all the honeys.

All boners and no substance. And when I rewatched it, it was twice in one day. In a row.

That's what they were there for, that was the plan, to give you a boner. And you got one.