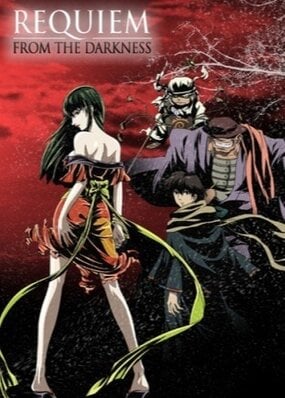 I loved the stories, each show being almost stand alone as a storyline, very rarely going over 2 or more episodes and yet as you keep watching, it does lead up to something bigger. They take a lot of Japanese folklore and old stories and depict them in a rather interesting way. It does get a little hard to understand in the surreal look. You never know what is real and what is spiritual because of how some of the characters look (More on that in artwork). If you watch it in the dark, be scared. But yet the show almost asks you to watch it in the dark because it is so dark that it’s hard to see some of the detail. The artwork is rather flat, getting its shading mostly with line drawing like it was done in pen and once in a while giving an almost three dimensional feeling almost CG-ish. It’s hard to depict though, since the CG blends well with the rest of the artwork. It has a certain feel that makes it look vintage though it’s a newer show. The background characters make it hard to know what’s real and what’s not because they all look a bit off. They most of the time look like monsters themselves and sometimes it shows who will be affected because the people that actually look normal turn out to be either killed off or the main character of the show. I fell in love with the English actors, there voices working perfectly with the characters they portray. I especially love Mataichi’s heavy voice, almost a dark monotone though with an air of mystery. He is able to keep the monotone that doesn’t feel boring. Momosuke has a fine voice for the wimpy little boy he seems to be. The music is very hunting and dark, never overpowering but always there to give you a chill up your spine. There isn’t anything to laugh about in this, no comic relief to tone down the story.

My first review of the year, and it's gonna be a positive one. And what better series to review than something dark, twisted and gorey like Requiem From The Darkness? It's fun for the whole family. Story: The plot involves an auther named Momosuke who wishes to write a book on 100 ghost stories. He encounters the spirit... demon... detectives (or whatever the Hell they are) called the Ongyou. They basically investigate legends and punish the criminals who are behind them or something. Crazy shenanigans ensue! Animation: Probably my favourite part of the series and definitely the most memorable thing about it for me is the unique art and animation style. I find that it fits quite well with the dark tone of the series and gives everything a very eerie atmosphere. Sound: At first I didn't care much for the intro or outro music. They just didn't feel like they fit with this kind of show but they eventually grew on me. The sound and music in the series itself works well enough from what I can remember. Characters: Momosuke does an alright job as the main protagonist but he can be a bit annoying at times. The three Ongyou are all very entertaining though and are pretty cool characters. The four work relitively well together and all have unique personalities. I actually liked Momosuke's publisher Tsutaya the most (because I'm wierd.) I'm not exactly sure what he's suppose to be but he has a pipe and monocle which automatically make him awesome. A lot of the background characters share designs and look quite odd as well... They look like spirits to me but I think they're suppose to be people... very strange looking people... Overall: I really enjoyed this series and even though I probably gave it a higher rating than it deserves I would recommend it to anyone who enjoys dark and twisted anime like me.

OVERALLOh, Requiem from the Darkness, you were at the top of my "Want to Watch" list for so long, building up my expectations, only to disapoint me later...Everything about the series indicated that I would love it. Bizarre art style? Arc-based horror series? I have a very good track record with both. But Requiem from the Darkness was quite possibly the most disapointing thing I've watched thus far (probably because my expectations were high, but that's definitely not entirely the case). Though, it was chock-full of unintentional humor, due to some of the ridiculous gore/random demon-things.STORYThe story got off to a miserable start, the first four episodes were the exact same story, just with different characters. The first time it was told, it was fairly predictable, the second time, I was confused as to why they were telling such a similar story, after that, it just became aggravating. Horror stories aren't suposed to be formulaic. Formulaic works for things like mahou shoujo. Formulaic doesn't work for horror. Most of the horror of anime is derived from the atmosphere and element of surprise (let's face it, animation isn't the scariest of mediums). After robbing itself of it's "creepy factor", it was forced to rely mainly on copious amounts of gore to maintain it's shock value.Additionally, more than halfway through, it eshewed it's previously established episodic nature, and introduced continuity into the plot. Now, I'm not saying continuity is a bad thing- if it's present from the beginning, that is. But to completely switch the style of storytelling like that is rather undesirable and off-putting.There was something very "off" about the series as well, something that I couldn't quite put my finger on. Maybe the method of storytelling was sloppy, or the pacing was just wrong, but whatever it was detracted from the given score, as well.ARTDefinitely not for everyone. I thought that it carried the show, but the friend who watched it with me thought it was too surreal and didn't do the story any favors. The extras/background characters had weird goblin or cube faces, which I assume was an attempt to save money/time masquerading as "stylization". I'm not sure how I feel about this, but it probably isn't good.SOUNDNorio Wakamoto was in it. Norio Wakamoto is my favorite seiyuu. Even my undying love for his voice couldn't bolster my appreciation of this series.OP- Alright, but neither the OP nor ED really fit in with the mood of the show.ED- Meh. My friend really liked it. I found the odd pronunciation mildly unsettling.CHARACTERS...were of only nominal importance. Most of them had stupid motives. 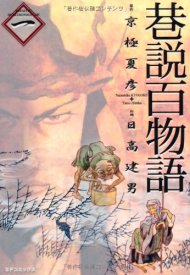