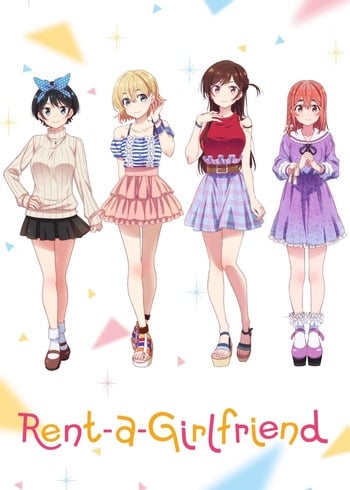 Jilted and heartbroken, 20-year-old Kinoshita Kazuya turns to Diamond, a Rent-A-Girlfriend app that leads him to a fateful encounter with Mizuhara Chizuru, one of the talents on offer.

One day, a poor high school second-year named Futaro Uesugi comes across a private tutoring gig with good pay. But his pupils are his classmates!! And they're quintuplets!! A-and they're all gorgeous girls, but they're also troublemakers who hate to study and are on the verge of flunking out! And his first task is simply gaining the sisters' trust?! Every day...

Both series feature the male and female leads attempting to hook up with their respective crushes, only for the two to eventually fall in love with each other. There are many plot twists, broken hearts, and uneasy friendships on display in both series.

It a nice romance anime i love it its kind of like rent a girlfriend.They are both good animes and they both wanted me with a second seoason.

The protagonist, Naoya, is a first-year in high school. He asks out Saki, a girl he has been in love with, and she agrees to be his girlfriend. He's currently on cloud nine. But then, a beautiful girl named Nagisa comes up to Naoya one day and tells him that she wants to go out with him. Naoya feels himself wavering because Nagisa is such a good girl, and he...

Both shows have a similar plot and the main character has multiple love interests. The comedy is similar and the girl's seem quite alike too.

Both shows have a similar plot and the main character has multiple love interests. The comedy is similar and the girl's seem quite alike too