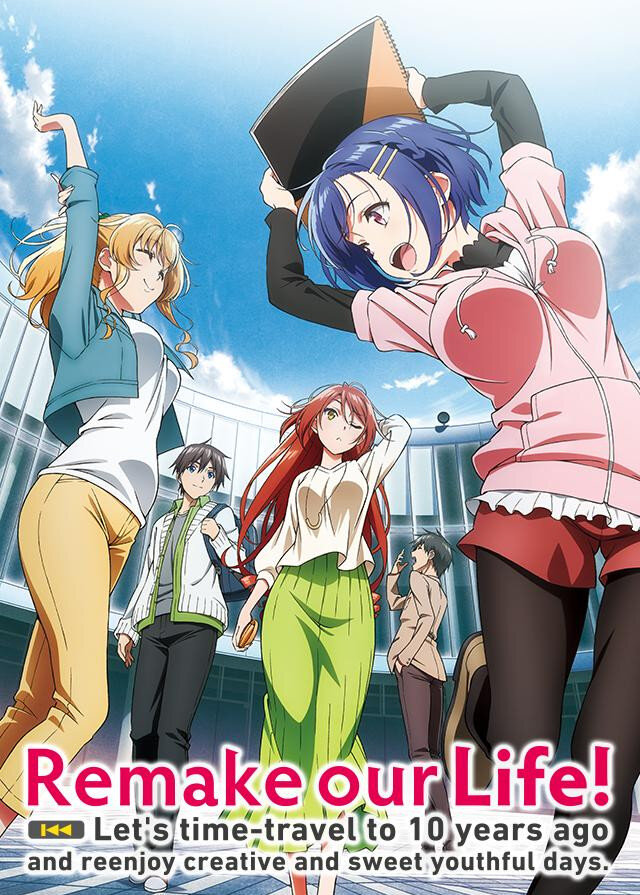 dispite the fact that remake our life is set in an universty the cast does not fell all that mature and it felt like a cheap copy of  re:lfe

The frst 3 epsodes are very dull,(the frst epsode was a 40 min long one) nothing worthwhile happens in it except the mc goes back in time.

Despite being a series where the characters are thought how to make a perfect series it itself falls short, a lot, trying to forecefully add fan service scenes(not major tho) and copying generic scenes like waking up in bed with a girl who you have never met before in your  life, with the red haired girl being the only one with a level head so far in the series( the mc, sort of as he is already 28 yearls old lol)  the story sort of picks up from episode 4 but not much is done to add value to the show.

not a terrible show, but just above average so far for me, and another thing  shouldnt the future change f the past is messed up? maybe no according to this anime

JUST WATCH RE:LFE ITS A LOT BETTER COMPARED TO THIS SERIES

Remake Our Life is to Pet Girl of Sakurasou what Golden Time is to Toradora: a very similar story with a cast of characters with strikingly identical qualities to their comparisons - but in an older, mature setting. High school is replaced with college as the setting and a lot of the cliche unrealistic rom-com elements that filled Pet Girl and Toradora are replaced with more realistic circumstances that the older members of the audience very much relate to in Remake and Golden Time.

Remake really did feel like a revamp of Pet Girl of Sakurasou, which is a great compliment given Sakurasou's cult classic status as a rom-com. It took the elements and theme of learning through failure, facing tough competition and the pressure of being surrounded by talented people, then applied it to the adult world - while also cutting down on the stereotypical rom-com tropes that plagued Pet Girl. Because while there was also the side romance love triangle between a hardworking loudmouth girl and the quiet yet extremely talented artist who both wanted the MC (Sakursaou fans will definitely find something familiar here) it didn't just tease around and center the entire show around that aspect - instead rather moving along naturally and finding a winner around the halfway point in a fairly realistic way (similar to Golden Time and how it did a roughly same equivalent to Toradora).

It also had an ideal ending that didn't feel forced and left the door open for there to be potential for a sequel, or just end where it was. That's honestly the best way a show could end.

The few knocks I do have against it is being a bit confusing to follow at the beginning and towards the end with all the time jumping shenanigans, and the questionable inclusion of a... "magic time loli" revealed towards the end. Kinda similar to how if you removed ghost Banri from Golden Time it would've been a closer to perfect show; the time controling little girl was a weird and unnecessary inclusion. Some things were better left unexplained and left more mysterious imo.

Remake our Life was fantastically well done and incredibly enjoyable to watch. It was a genunine gem we don't often get from seasonal anime, and really stood out this season. If you liked shows such as The Pet Girl of Sakurasou or Golden Time particularly - then I especially reccomend this one for you.

Super relatable to those that have or do pursue artistry. Brings a fantastic story that speaks to you on a deep emotional level, might be one of my favorite animes of all time now.

I honestly thought this was an amazing anime. After watching, it's one of my favorites of all time. Obviously, I compared it to ReLife. It's hard to say which is better because the stories are actually more different than you think. In this anime, the MC doesn't choose to go to the past, but instead is forced to the past without warning and must figure things out independently.

We never really learn about a lot of the characters backgrounds or pasts. The anime makes this work by setting the story up to focus mainly on the future and progression, so the lack of context for some characters isn't relevant. I appreciate that this anime kept the fan service levels pretty low. Obviously, a lot of anime use fan service to draw in viewers but in anime with a real story it's a little annoying without a purpose. Remake our Life is interesting in that the purpose and plot changes a bit during the anime.

I don't want to spoil any more than this and anything else that I would say would lead to more spoilers. I recommend you start watching IMMEDIATELY. Also, interesting fact, the voice actress for Kawasegawa has voiced some pretty popular characters like Yui Yuigahama, Ruka from Rent-a-Girlfriend, Ichinose from Classroom of the Elite, Claudia from Asterisk, and even Chitoge from Nisekoi.