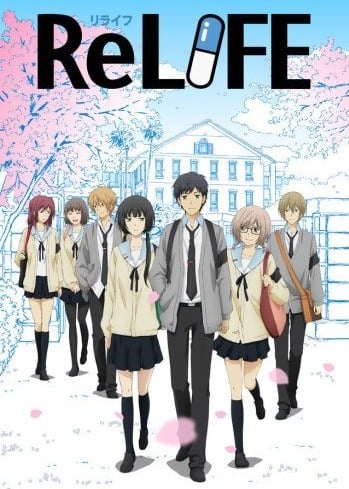 Ryo reflects on the year before and his failure supporting test subject no. 001

This Isn't the First Time

A Trip to the Past

Both are high school rom coms with an antisocial black haired female character that is helped by a male lead to make friends in a very heart warming fasion.

The styles of both shows feel very similar cutting inbetween serious and comical.

I see no reason you wouldn't dig one if you dug the other.

I agree on this because of the feel of it.

Light hearted drama; Romantic comedy; High school(ah, youth); The main love interest is antisocial and the MC helps her out.

The drama is different though, I don't want to spoil anything so, if you've watched one and enjoyed it, watch the other, you'll enjoying more or the same. =D

ReLIFE is a pretty uniqe series and Kokoro is not that much similar buy IMO it's the closed you can get... Both have a sci-fi background, tresure friendship, have some romantic threads, are about adolescence.

Both of these have a storyline that focuses on school, suppressed feelings and character development. While Kokoro connect is more dramatic, ReLIFE has a more laid-back and humorous feel to it.

Hikigaya Hachiman, with his unique thought processes, seemed to be glorifying the life of a loner when his guidance counselor, Hiratsuka Shizuka, talked him into joining the Service Club. Together with the other members, the breathtaking, flawless Yukinoshita Yukino and the cute, popular Yuigahama Yui, he spent his days solving all kinds of problems for his...

I Really enjoyed this one

it doesn't have romance imo but funny , emotional

i love it because the main character is amazing Hikigaya Hachiman , it's like hikigaya is past me. persnoally thats why i love this anime

believe me you should watch this at least once.

Both main characters are in high school...sorta. Both have some deep issues that sometimes put them at odds with their classmates. More importantly though, both are forced into a position where they must evaluate their life and choices. Both characters also, for better or worse, take action when there is a problem and have a huge effect on the people around them.

Both of these anime are about straightening out a socially awkward lead character by exposing him to typical high school situations.