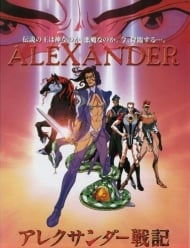 It was prophesied that Alexander the Great would first rule the world and then destroy it. Born the prince of Macedonia, his father was determined to have him remain an obedient military pawn whilst his mother wished for him to be a destroyer of worlds. Now, as Alexander moves across Babylonia towards the "Hindu" lands, enemies from both outside and within his camp struggle to stop him before he can conquer the world and bring about the prophecy of its destruction. Can the world be saved, or is fate truly the deciding factor of life and death?

AESTHETICS As a Greek I was curious to see how a steampunk version of the life of Alexander the Great would be like. Being animated by studio Madhouse, just added fuel to the hype. Turns out the aesthetics were the only thing I liked, and even those are not for everyone. The artstyle is very distinctive; once glance, and you know it’s from the guy who did Aeon Flux and some Animatrix shorts. Being someone who got sick and tired of seeing the same anime style repeated in almost every show, I found that very refreshing. But I also found it grotesque, since I was essentially watching Macedonians with facial mascaras and tight bikinis. The weird clothes and the cybernetic implants were cool, but the animator has a thing for making everyone look like ugly transvestites. I’m an 80s guy, I am not into this whole sexual acceptance of GLBT. And I know many of you actually believe than most ancient Greeks were pedo-gay-goat bangers, but that is not true, they were admirers of the human figure. What you are thinking is called Romans! PLOT As for the plot, they mixed historical events, many good sci-fi ideas, existentialism issues, and metaphysical concepts, making it sort of an illegitimate child of Neon Genesis. It is advised to know what the historical Alexander did before watching the series, since there a lot of artistic liberties, and we don’t want you to be misinformed, do we now? Assuming you care that is, and you don’t mind stuff like Pythagoras’ mystical artifact, cults of cyborg assassins, and preachings of Jewish Kabala having an orgy or weird ideas. It otherwise creates a wonderful blend of concepts that do not contradict one another, like a Sunrise mecha. But then again, all that are too much to fit in 13 episodes, so the focus constantly switches from one theme, to another character, to another location, to DARN they look so weird in leather. This has the effect of making the story interesting on paper, and yet boring on screen because nothing and no one get enough spotlight. The good part is, no episode feels the same as the rest, the bad part is, you are left with too much to think about and yet very little to take away from it. Which is kinda sad really; I felt like everything fits into place and needed more time to show how it’s all part of a huge machine that ordains the fate of the algorithmic cosmos. And despite that, it shows Alexander going against this system and thus his own destiny, thus not succumbing to fatalism, an ever-present element in ancient Greek theater, which I happen to dislike since it’s the birthplace of the term Deus ex Machina. It is overused even today, where cheap solutions come in the form of divine interventions. Even when you are losing, the scriptwriter will let you win anyways, because you are the protagonist and that is all the logic lazy storytelling needs to overcome any problem.The ending is probably going to frustrate a lot of viewers, since it ends right before the final battle, and leaves the outcome open to interpretation. I was yelling “Where is the rest of it?!” even though I knew from history what will happen next. It was a messy way to wrap this clusterfuck of concepts, but thinking back at it, it’s not that bad. Not being shown how it ends, means you don’t know how it ends, therefore following the theme of going against destiny, and not knowing what happens next. That was so subtle, it took me a decade to realize it. CHARACTERS Regarding the characters, although I did say the plot constantly switches focus amongst them, it eventually comes back to Alexander, since after all this is his biography, set in a very weird cybepunk setting, where everybody is a queer. So you will probably remember only him as a character, despite having as much personality as all of his generals, and enemies. Which is not that much, but still more than enough to tell such a short story. I can’t say he or anybody else is memorable as a person, since they are closer to personifications of ideals and concepts, and yet still behave more humane that anything Urobutcher ever wrote. EPILOGUE Nevertheless, artwork and aesthetics tend to overshadow the cast, since they are simply way more eye catchy than anything the characters say or do. Which in a way is a disadvantage, since you end up caring more about the wrapper called pretty colors, instead of the heart of any story, called the characters. What I mean is that the show has an identity, but it’s not found in the cast within the story. It’s the animator who made it stand out the most. So meta, it becomes aesthetics for the sake of aesthetics, and I am not in favor of that. I did enjoy the show but only on a conceptual level. The presentation was also overbearing and hard to sit through, since I was essentially watching a dozen episodes of ugly ancient Macedonians talking about the meaning of life, before noticing a hole in their stockings. SUGGESTION LIST - Aeon Flux, made by the same guy.- If you dig protagonists who aim to rule the cosmos, then head for Legend of the Galactic Heroes, Death Note, and Code Geass.

I watch this first decades ago on a legendary TV channel of my region, it was weird and interesting, but never manage to watch it completely. So i download it and rewatch it like a month ago. Still as weird as i remenbered, with a WAY TOO WEIRD character design, but the action and animation itself feels worst that i remember. The story feels totally incomplete and tangled with a anticlimatic ending. It's something original, but not for all tastes. Some episodes really impressme tho.

Story: I'm no Alexandrian Historian and what I know about Alexander the Ass Kicker is limited to Deadliest Warrior and Fate/Zero so I can hardly comment on the changes they made to make it space age ancient history. What I can comment on is the sheer amount of crack LSD that was used because the part with the dog wasn't made after eating rotisserie chicken. Shit gets fucking trippy when Alexander goes on a dope trip in his moonage daydream with Dographes as he looks into the future eye to gaze upon cities and landscapes, the destruction and creation, the end and the beginning, the armies and the people, the holy fucking shit he is a fucking dog philosopher the fuck kind of ancient egyptian shit am I on and of course, the real deep nitty gritty plot shit that would completely spoil not much really because it's fucking messed up and gets even more tripped out by the time the final crackisode rolls around and it just gets fucking insane. That last half? That's like the second half of the show, where it degenerates to meth-induced dreams, shit that can be considered filler, philosophy, symbolism, creationism, endism, shamanism and holy fuck it barely makes a lick of sense. On a stage it does, Alexander and his fabulous hair is conqueroring all these bitch ass countries, he is just steamrolling these fools and could even solo some shit with his fabulous powers of- Man, did you see the main picture for this in the entry? That hair? That undeniably sexy, gorgeous hair that you can run your fingers through? Can a man like that lose? Can any of these fuck shits stand up to that? No. No. Fucking. Way. No fucking way can anybody stand up to that, let alone his normal outfit, meaning that he is the perfect leader through and through basing it on looks and how badass he is. But the first half? It's still kinda retarded because: 1) The people are a bunch of dumbshits. 2) Not enough snake porn. 3) There is a term for snake porn. I wasn't the one who looked it up. 4) Mathematical as it was, needed more Ptolemy and Pythagoras. But, it did have the rising of cavalry wrecking asses through strategic ass-wrecking positioning and formations, riding down infantry not just because Alexander led them, but because- Wait, that is why. He brought about the age of cavalry charging through waves of infantry because again, they're a bunch of bitches to Alexander and his posse of good looking guys, and that one pussy who is a complete wuss. Animation: Leaving Alexander the Sexy for a moment, the character design I didn't mind much. Reminded me of World Record from the Animatrix and I can almost say it's unconventional from what I'm used to. Sure a lot of them are ugly and the armour designs are not only impractical but pantsless and some even don't even guard the nipples but it was a fabulous time back in ancient space Macedonia. And Alexander? His hair, his outfit, the way every female gets wet when they get near him, let alone look into his eyes, guy could have the biggest orgy in all of ancient space with them looks. They reuse scenes, the battles look cheesy and bad, that last episode had a boost in animation and crackaphine in the (At the time) episodic acid trip and that whole early on snake/woman porno scene which was kinda wrong and actually really wrong once you get the implications so I guess the animation really was bad overall. Sound: Out of place music, bad music, Alexander's totally excellent voice, that really effemin- soft speaking guy, those fucking dick punching awful voiced Mathematician Pythagorancers who I really have no idea who they are anymore and can only guess, fucking hated their voices but damn if I remember them. This is generally shit. Characters: Names I remember: Alexander, Pythagorias, Dographes, Socrates, Crazy Socrates, Methmes- Bhamin?, Egypt, Olympia... and that's about it, ones that look correctish. I couldn't remember names that well and most of the characters are just names or part of Alexander's crew. They hardly matter but Alexander himself, he's top biscuits. Nobody can touch him and the only one that comes close is Dographes who is the man to go to for your space trips. Dographes man, Dographes. Other characters that are somewhat important: King Darius and Olympia, the former who can't compare to Alexander but has the balls to stand up to him and Olympia Snake Charmer, and by charm I mean fuck which is obvious in her first appearance. So obvious that I didn't even bother to warn you. It's more about the journey than the characters, because the journey deals a lot in visions. Dope visions. Overall: It straddled the fence of crap and tolerable until the second half, where it took a dive and in the final episode, spinfucked a volcano into an acidic explosion that caused the stars to fall out of the sky and mountains hanging ten on the waves of the baked ocean. Turned into fucking shit is what. Illogical, retarded shit. And I don't think Alexander face stabbed ninjas in actual history. Certainly not ones of a mathematical cult. 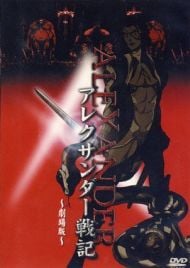 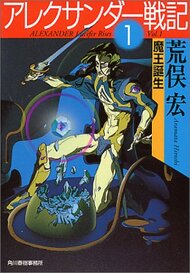