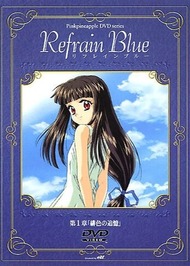 Every summer, the students of Touyou School have their summer school in a beautiful location by the sea, and melancholy Matsunaga Yoshihiro is charged with their care. With a troubled past, Matsunaga seems to blend perfectly with the also troubled Morisawa Nao, a young girl with much sadness in her heart. With all the heartbreak, can these two finally find love again?

StoryRefrain Blue is based on an h-game. While some series manage to pull this off well, making you not-so-convinced that's what it's from (KgNE, for example), Refrain Blue is a bit more obvious in its roots. The OVA itself isn't hentai, though. There are only two scenes that might be considered questionably ecchi (where Nao has her shirt removed), and there is some nudity in shower scenes, but it's probably the same amount as KgNE. I seriously am starting to think that all h-games have one or more of the following in them: being at the beach, a long lost promise you remember, a long lost promise you don't remember, multiple people falling in love with you, tragedy, and giant breasts or ecchi. Refrain Blue has most of these, making it uber generic just like every other goddamn based on an h/dating game series. The general premise is that the main character made a promise to a girl a long time ago by the ocean, and then she died (I think, at least). Nao is a girl who is also at the beach, who also had a boyfriend die in the past. What's up with people dying? Does that make the games turn people on more or something? Anyways, they end up gravitating together, and that's that. Besides the delving into their pasts to see what's going on, the majority of the OVA is lots of thinking and remembering on the parts of the two main characters, with fairly brainless interjections from other non-important secondary characters. The tone is overall depressing, and in general the story ends up being nothing more than the same recycled garbage that has already been done over and over and over. Come on, Japanese game creators.. if you want to make the latest and greatest game to convince the guys to jack off, why not make it UNUSUAL for once. Then at least the anime version could be more interesting. AnimationYes, it's based on an h-game. No, regardless of what anyone tells me, it's not necessary to shove bouncing breasts in your face every 2 seconds. The character designs bothered me too, looking very generic for dating/h-game characters, with super round eyes (not as much as Kanon though). Colors were scattered and didn't fit one particular color palette, but were vibrant, thus making everything look a bit odd. There was one sunset scene that was indeed beautiful, and a few night shots by the water that were decent. Other than that, everything about the animation was fairly uninspiring. SoundThe audio is the only redeeming factor in the OVA, but not because of its originality. A cross between orchestral tracks and interesting synths were used for the majority of the scenes, which all were very appropriate for the subject matter and tone. While it wasn't anything fantastic, the music was probably the only thing that helped the series not such as much as it did, since it fit the mood quite well. Voice acting was fine. CharactersThe two main characters are the only two that are explored in any depth, and both are so mind-numbingly textbook that it doesn't really matter. Both are depressed and have had people die in the past, period. We don't know much more besides that, and quite frankly we don't care. The only thing that interested me about any character is one of the acts Nao tried to do (you'll see what I mean if you watch it). That act was actually realistic and quite sad, so it was the only thing that got through to me at all. There are tons of annoying secondary characters as well who have no substance and really not a lot of function in the OVA. OverallRefrain Blue sucked, period. It was a sorry excuse for a ripoff of every other dating sim transition out there, had nothing very unique to it, and generally will bore you to death. The characters are shallow, the animation is so-so, and the only redeeming factor is the still generic music! Seriously folks, unless your goal is to watch anything romance related, don't pick this one up.