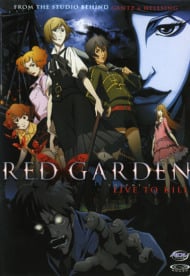 Four students of the same age have nothing in common except that they attend the same elite New York City school. Kate, Rose, Clare and Rachel all belong to different cliques and hardly notice each other's existence. Then one day they gain something in common, something very important, something mysterious. They find themselves drawn together by the death of a fellow student and the secret of their own missing memories. Suddenly they are thrown into a world of hidden warfare on the city streets and are caught up in secrets which would not be believed by others. These four all have their own problems to struggle with, things that seem more important than such strange conflicts. Can they escape from this fate? The only thing they know is that despite coming from four different worlds they now have to rely on each other or die without a hope.

StoryStuck somewhere between Buffy the Vampire Slayer and Bokurano, Red Garden generally has the same kind of appeal as the other two without being quite as good. Fundamentally, it’s about how the personal lives of four high school girls are affected when they are forced into a supernatural battle between good and evil. Still, being dark, character-driven, and more josei than shoujo, there is a maturity to its approach which gives the whole product a fresh feel. While other similar series dedicate a few intermittent scenes to portraying the conflict between everyday life and the duties of a demon-slayer, Red Garden stands out as delving much deeper into the various personal and professional problems associated with suddenly being immortal. For example, one commendable development is how slowly the protagonists get to grips with their new-found abilities. No sudden powerups for them – they spend many agonising hours hopping on the spot trying to remember how they leapt from rooftop to rooftop the first time around. Another personal favourite is the story of Rachel’s deteriorating relationship with her boyfriend, which is probably the easiest to relate to and has the most mature conclusion. Of course, the downside of Red Garden’s approach is that the first half feels rather slow and aimless; although most fans are likely to watch Red Garden for the monsters and the fights, the first ten episodes prefer to show the girls shopping and spending time with their siblings in stead. Furthermore, the plot has the distinct drawback of being simplistic and being a lot like other similar series on offer. Nevertheless, there is a payoff of sorts; all that characterisation and build-up does eventually lead to some very emotional scenes in the final half. More importantly, once there is some decent action alongside the strong character development, Red Garden turns out to be highly entertaining on all levels.AnimationThe colours are bold, the lines are clean, and the character designs are really very attractive. Moreover, with cool and snazzy costume changes every episode, I often thought I was watching a cast made of catwalk models. Incidentally, the action sequences more often than not look awkward, almost as if none of the animators quite knew what to do with four girls in miniskirts and stiletto heels for weapons. However, this may be due to budget restrictions, since towards the end, everyone leaps around in fairly fluid motion, high-kicking and back-flipping with the kind of zeal more common to shounen series. Overall, Red Garden’s animation should be enjoyed for the style rather than any technical grandeur.SoundAs a whole, the themes are great; they’re very contemporary, very funky, very urban, and probably Red Garden’s single most impressive element. Also enjoyable is the dialogue, which often angles towards the kind of realism where characters randomly scream at each other and talk over each other during arguments. Having said that, there is one horrible mistake sound-wise which should never have made it past the brainstorming stage (never mind editing). I speak of the musicals. Yes, Red Garden decides on two or three occasions to have its protagonists spontaneously burst into song, lamenting their situation like Dorothy the morning after a drunken trip to downtown Oz and before the singing lessons. This feature has no benefits for the story and even less for the soundtrack since the songs are godawful; I’m just glad they only occur within the first few episodes.CharactersAt the least, Red Garden deserves credit for creating individualised characters with relatable problems and personalities. Initially, judging from their various outfits and temperaments, they appear to be mere high school stereotypes; eventually, as their backgrounds are revealed and their friendship grows, they become believably complex. What is more doubtful, however, is whether the four protagonists are as likeable as they could be. The weakest is Rose, who, even past the middle still whines and whimpers in the corner while her friends risk their lives defending her from monsters. Her personal story revolves around a broken home where the father has disappeared off somewhere (we don’t know where) and the mother is in hospital all the time for some unknown reason. Despite this, she is often more pathetic than sympathetic. Similarly, although far more interesting, the other girls also have their annoying moments – Kate is rather wet, Rachel spends too much time moping, and Claire needs to tone down her hostility. Another worthwhile character aside from the girls is Hervé, the central antagonist, who is very intriguing for his combination of good looks and sinister charm. Johan Liebert (Monster) he ain’t, but he’s still gratifyingly two-dimensional; while his actions are deplorable, his motivation is emotional and understandable.OverallTo anyone interested in an anime which is more character-focused than the usual, or anyone who just wants to see an old idea presented from a fresh perspective, I highly recommend Red Garden. It is unlikely to bowl the average anime fan over since it lacks ambition where the plotting is concerned, but for most people, it should still be a very decent romp.

Right off I'd like to say if you decide to watch Red Garden I highly recommend you also watch Dead Girls afterward. Being a kind of after story well concludes the girls endings that Red Garden kind of leaves a bit open.Story:There was a lot to this title, I enjoyed it once I got past all the melodrama. At first it kind of went a story telling in a pulp fiction style, and poorly at that, but thankfully it moved away from this style and continued in a more linear fashion. It had pretty decent progression from ep to ep and made it well worth watching after you're into it. Really only the first ep was hard to finish and even then it ended on a pretty awesome note.Animation:This was really only about average for me, it had it's ups and downs and I was thankful for no rainbow spectrum hair colors. Some of the scenery was quite nice to look at but from time to time it just kind of seemed drab and unimaginative... then again this went well with the theme of the show anyway. Still, I've seen better and I've seen worse.Sound:Mostly forgettable, though both the ED's were actually worth listening to a few times... must be the heavy metal fan in me. All and all, I wasn't really annoyed with them and that, in my book, is always a good thing.Characters:At first I was kind of annoyed by a few of the characters, but frankly this was probably the point. Especially since they eventually grew out of it anyway, my only real problem was understanding the motives behind the antagonist. He did some pretty off the wall and unexpected things that were counter productive to his goals. This pretty much caused a perfect score to dwindle to it's near perfect state you see now.Overall:This title went with the rare yet more realistic, there is not ultimate bad vs ultimate good just shades of gray, approach to it's story. Each character, even the antagonists, weren't really good or evil per say. They just had their own motivations and sense of righteousness. That being said, sometimes their motivations and actions weren't really in sync and it left a kind of confusing taste.In any case, this title along with it's OVA Dead Girls, was well worth watching. It was entertaining, enjoyable, and at times, down right funny. If you can stomach a little bit of melodrama, or even enjoy it, you just might find something you'll like here.

Red Garden is one hell of a supernatural drama with great character development and story telling. I have to say that it is pretty slow paced but after the first eight or nine episodes things really begin to pick up. There are moments where the main characters main seem melodramatic but consider the moment in which they're doing so and you'll see that they're actually quite justified in their responses. Red Garden can basically be cut into two parts with the first 10 episodes really paying close attention to how the girls are dealing with their current situation and how it affects them mentally and emotionally. The next 12 episodes is where we really get into the plot and how the main characters decide to do the best they can with the events that have transpired. To those who are impatient, the first 8 to 10 episodes will seem boring and unneeded but I felt that was actually one of the good things about this series. Most anime of today tell the story of a character who finds themselves thrown into an unbelievable situation and just go with the flow and after the first two episodes, they're pretty much unfazed by anything and everything. The main characters of Red Garden give real reactions to an unbelievable as well as unforgiving set of circumstances. Their lives are completely changed as they are forced to fight these demonic creatures while having to maintain their high school lives. The pressure and stress felt by the main characters is understandable and instead of a quick reaction of "get over it and move on," we're taken through a full course of emotional turmoil that really brings out each character. Of course, they eventually grow and come to grips with their new lives but the difficulty of maintaining their normal lives as teenagers and their new lives as "Dead Girls" is still a hassle. Red Garden has a fluid story that progresses a bit more with each episode, detailing both sides of the story. Neither side in this anime are necessarily good or evil but it's that they both have their own ulterior motives for fighting that are each legitimate. Red Garden really packs on the drama with having the main characters not only have to deal with fighting as "Dead Girls" but each character also has either a complicated family life or a stressful school life that really gives this series two plots in one. You might not love this series for its slow pacing and outdated animation but you'll love Red Garden for its great storytelling and the exciting drama. I suggest watching the ova after you're done watching the full series as it clears up a few things that weren't fully explained in the series. 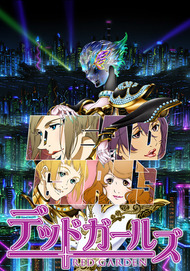 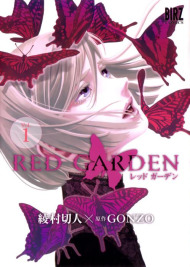