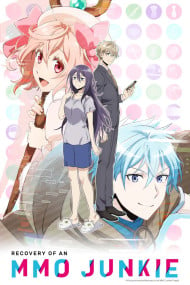 We Don't Know a Thing

You and I, the Cowards

I'm So Embarrassed I Could Die!

You and I, and Me and You

I Call That Feeling Marble

On a Moonlit Evening

Spoiler free review.  I am super glad that i watched this anime. This anime had the right amount of romcom.The characters bloomed beautifully and it was just heartwarming to watch it. This anime is unique since the characters age more than twenty (some even in their thirties), but aimed for the teenagers and it somehow worked. It was just so adorable to watch, you would go "awww" as if you saw a baby reaching its hands to you. But this anime, had a few problems. Many things were unanswered, roles of some characters were not known. This anime ended in way, as if it was a teaser for season 2. I am happy for the fact that they ended this in 10 episodes (I didn't want anything to mess up after what happened in the last episode <3 ), but honestly, i wanted more. Story (9/10)The story started off perfectly and grew in a perfect manner. No large steps, not tiny steps were taken. Some anime use misunderstandings, cliché love to progress the story, but this one used godly coincidences to get the story going. Animation (7/10)The animation was not commendable. It was a little shabby, but they used it to make the chibis more cute. The eyeless, blushing chibis were so cute and adorable (oh god, now i remember eyeless natsuki ;-; ). The animation was not that good, but I'm glad that it didn't interrupt my watch. Sound (7.5/10)The OP and ED were really great, catchy and unskippable. The BGMs were really well done, and it set off a nice mood for the anime. The voices well matched the characters, and my favourite one was Sakurai-san's. Characters (8/10)Like i said, this anime used godly coincidences to sew the characters together. You can see them coming. It was not that bad since they were atoned by the courageous actions of the characters to get together. The characters grew beautifully and will make you attach with them so much in such a little time. All the characters in the anime are more than 20 years old, and this fact makes the show really unique. Overall (7.8)I still remember how eager i was to watch this anime every Friday (the episodes were aired on fridays), and i would think about it in the school, and talk with my friend about it. You might need a little patience to reach the romance part, but its worth it. If you are here to see some romcom and cute moments, you are more than welcome. But, if you are here to see why Morimori-chan ended up a neet, or the "recovery" of her, then you'll need to know that those are exactly the unanswered questions i was talking about.

*Some Spoilers* Where the hell's my Mountain Dew "I met my girfriend online" Takes a MMO gamer spin. A harmless romantic comedy for people who like harmless romantic comedies, Netjuu no Susume is a pretty much solid example of this and is full of tropes that will have you smiling through a cringe. That's what it's supposed to do. The awkwardness is very much meant to be endearing, although there are some parts where it falls flat out awkward- which people would say makes it charming. I'm not accustomed to romantic comedies in general and it isn't my preferred genre, but I GUESS I could see why they say this. Basically, its awkward people doing awkward things awkwardly, and also there's video games. It doesn't do anything new, so if you're looking for innovation or brave storytelling it's not here. This, as I said, is harmless, but nothing special. Sure, it connects this person in another world video game type of anime we've been seeing pop up over and over again with a typical SOL romance in a decent way, but they're not trying overly hard to draw you in with that premise. Video games are, in this anime, a plot tool used to construct the relationships between the characters. It's a nice gimmick, but obviously, the characters are the real point, so it's often brushed to the side starting from the middle, onward. It's used ok enough in the beginning. Now obviously being a central theme the video game is important and so is the culture associated with it. Most of the anime's narrative is built around moments where it goes from the in-game personas of the characters doing something generically RPG and interacting, then switching out at the real humans behind the avatars while you watch their QUIRKY reactions. It's not terribly paced, either. It leads to most of the comedy. Story - It's whatever. The linear nature of the story is built around the two main characters' relationship as it develops and as they discover each other. It's completely set up from episode one, of course, what will be happening as you figure out that these two people are playing opposite their genders on a video game. Obviously they're going to get together and realize WAIT YOU'RE A DUDE/GIRL?! ect. Until that happens is where it really counts, and there's just... a lot of sludge there. They overplay it. This didn't need to necesarily be as long as it was, even as short as it was. It isn't like every episode ended on a game-changing cliffhanger, and there were really only one or two big story moments to keep the interest afloat. The progression is linear and that's fine. I never expected much from this anime, so I wasn't disappointed with the story, but the other aspects are where the anime is the strongest. Animation - Once again its absolutely nothing special, but for this anime it was very appropriate and everything it needed to be. I'm not familiar with the studio but they did a decent job. Sound - Good for this anime. The SFX weren't ever super out of place and the opening combined that video gamer chiptune-y thing with a typical anime opening sound, which was nice. Voice acting was ok. Characters - This is where the magic happens. Your romcom archetypes have been replaced with some pretty nicely designed characters, all of whom have their own kinds of quirks that you don't typically see in an anime like this. Moriko is a girl gamer, but a pretty realistic one that's nice to watch and only cringy in a good way. The premise made me worry she'd be self-insert, but she's actually very much her own character and the show's tone revolves around her emotions. It's fun to watch her make a decision and react to it, as you think "yup been there." Yuta is ok, definitely not 100% generic either, and just as awkward. Once you get past those two there are the many side characters with a few quirky personalities that really spice it all up, but given the limited runtime, don't come into play too often- meaning they dont overstay their welcome. Then you have the "Characters" in the meat of the show, the MMO GAME THAT THE SHOW IS SUPPOSED TO BE ABOUT, and the way their behaviours to the people controlling them, it makes it entertaining to imagine and see what the real people are thinking while the video game avatars act. Overall - So yeah it's decent. I never found myself extremely wrapped up in any of the events that were happening and it wasn't exactly easy to pay attention to all the time, but there were a few moments where I watched an interaction and felt something like "that was cute lol". I wouldn't reccomend it to anyone looking for something REALLY GOOD but if you just want to kill time on a fluff-fest with some cute stuff going on, this is for you.

When this first aired in the fall, it wasn't really on my To-Watch list. Then I saw it and thought I'd check it out. It really had me in the first few minutes! While not the best show of the year, I can say I really enjoyed it We have Morioka, who has just quit her job and has become a NEET. She loves to play MMOs and thus, that's what her life consists of. She ends up meeting many people online and they become (pretty much) a close knit family. Everything seems to be going rather well until she gets elbowed in the face by someone named Sakurai, who finds her cute and wants to take her out for dinner as an apology. And because Morioka is such an awkward butterfly, she ends up declining politely. That should have beent he end of it, right? Wrong I guess the reason I most loved this show is because, as anime fans, we all have a Morioka in us. We all are passionate about something and (at least) I felt myself reflected in her. How she would flail around, would prioritize her obsessions over herself sometimes, and just her enthusiasm for gaming. We also got some really cute rom-com scenes, which made it a really feels good watch. But it wasn't all just fun and games. As this is about a recovery, we did touch upon some self-depreciating and self-esteem (self-worth) issues and while, by the end of it, the wrap up was semi-inconclusive, we did get a nice close with Morioka finally understanding something and taking steps to "get better" Out of the whole bunch, Morioka was the character with the most development, as she is the main character but we've also seen a character like this. She is pretty much what we invision a NEET being - baggy clothes, sits in front of a screen all day, eats out, and no friends aside from online. Still, there was something very endearing about her character that made it hard to dislike her. Likewise, Sakurai was very akward, especially when trying to get to know Morioka better but I felt it was all very relatable and realistic for people like them In terms of the animation...it wasn't amazing, but it was done really well and was consistent throughout the show. I especially loved all the stills and chibi versions of our characters. And like usual, I'm not a huge fan of openings or endings, but I feel like the opening for this series really screamed Recovery of an MMO Junkie. It was very catchy, video game like, and overall fun to listen to (though I did quit listening nearing the end because the suspense in each episode was killing me) Would most definately recommend watching this show, especially if you're looking for something light hearted but also filled with many feels 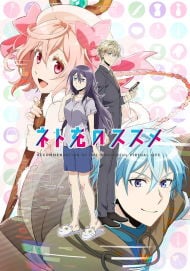 Recovery of an MMO Junkie Special 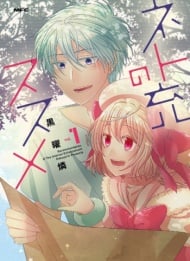