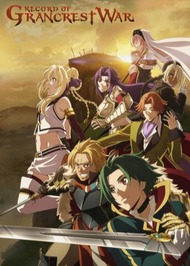 Atlatan, a land ruled by chaos. Fearing disaster brought about by chaos, the people lived protected by “Lords;” those with the power of “Crests,” used to suppress the chaos. However, the Lords decided to abandon the concept of protecting the people and turn against each other, stealing each other’s Crests to gain dominion over one another. Among these people are Siluca, a lone mage who despises the Lords, and Theo, a vagrant knight training to someday liberate his homeland. Enticed by Theo’s ideals, Siluca’s coercive tactics have the two forming a contract and together, reform a war-torn land.

Look i know people love putting up reviews in the first couple weeks and the saying how bad the show is....... That should make a rule where you have to of watched 80% or the entirity of the show before putting up a review YES, the show started pretty poorly. The typical young attractive male lead wants to rid the world of evil and hes a goodey-too-shoe. But This show has turned out to be actually different from the rest of typical anime. the dark pacts made by leaders of armies, great animated fights, brutal deaths, characters that turn enjoyable to watch every week And a male lead that doesnt hesitate to kill off a enemy who is disarmed and no remorse for people who betray he's ideals. AND HE NOTICED A MEMBER OF THE OPPOSITE SEX ATTRACTION IN HIM AND ACTS ON IT........WHAT!!! you dont believe me well thats what you get for leaving on episode 2... Muahahah Animation is what you expect from A1 Pictures solid 8.5 and above in plenty of areas The story actually turning out to be a bit like game of thrones, many king and queens wanting to be in control of the enire country, betrayel, war, bloodshed Characters started off typical, usual, same old sh*t......... But they are actually turning out to actually be different then every other anime character Character design is awesome aswell . Psst and the music is done by the same person that did Psycho Pass!!!! Thats all folks. thanks for the read :)  Hope you stick with this anime with me.

Sigh, here we go again once more unto the CHAOS. TL;DR No shame in skipping this one, if you have seen one LN anime with combat and magic/other and war, you have seen this. Grancrest opens not on war, but the two factions coming to terms through a marriage, naturally we first have to show the heroine running to barely make it to the ceremony and she hints that she is an elite by complaining why she has to make the peace speech, cut to her barely getting there and suddenly CHAOS which only she can sense and she tries to stop the couple walking doen the aisle through some very bad dialogue and then proceeds to dash towards the altar very slowly, but naturally she is stopped by a random dude who we of course believe to be responsible for the chaos or he thinks that heroine is trying to hurt the leaders, naturally the CHAOS turns into a demon (not the kind you are thinking about, and yes it's spoken in bad english) and the unsubtle music tells us that sh*ts about to go down and for some peculiar reason the demon only decapitates the leaders and leaves. This causes the heroine to monologue about the events caused by this, and thats a good thing for we don't get to see them, also when the male of the couple about to be married extends his hand towards the female, she is apparently so upset that she no longer has any feelings towards him and she leaves. Cut to untold time later and heroine is traveling with the random dude because she is to serve a lord as a magician and the dude feels responsible for the death of his lord at the wedding, which one was his lord isn't told for it matters not after all he is already dead :) Again she proves how elite she is by complaining about the slootines of her uniform (it's actually not slooty at all) and how her new lord only hires women and only based on their looks, but this more important than life conversation is interrupted by soldiers of the opposing faction, she gets out of the carriage and is about to throw down but PROTAG-sama comes riding to rescue (IS THAT A KNIGHT IN SHINIG ARMOR REFERENCE?!) and he spouts the usual spiel how his way is right and theirs is wrong and guess what? PROTAG-kun is different from others, dare I say special for he belongs to neither faction!!! bet you didn't see that one coming :) Some fighting happens, oh and don't worry it's bad, there is no choreography and when PROTAG-sensei gets slashed, the resulting cut might be the lamest I've ever seen, he barely takes down 2 soldiers and the rest run away and rest easy the leader knows his stuff by proberly remembering to say "REMEMBER THIS!" So even though he just sucked major kintama, he got that secret PROTAG-san juice so the heroine must have him, so she proceeds to talk with him and in 10 seconds he tells his past and objective in life and that he is also special because instead of getting his crest he made it himself, she decides to help him and thus summons the first of bound to be many ugly demons and here is where I could not take it anymore because it's explained that you can strenghten your seal by absorbing CHAOS and said stuff is what demons are made of so how is not every single person with a crest max rank/level if they can summon demons out of thin air and just absorb the chaos they drop? but PROTAG-senpai proceeds to get his teeth kicked in and also as a surprise to no one he wins by accident and accompanied by condescending clapping from the heroine he absorbs the CHAOS and his crest is upgraded to a knight and he can form a contract with one mage, I'll give you five guesses on who that's going to be and here we realize that skill and whatnot mean nothing, it's all bout dat power level BABYYY!!! Cut to the lord who ordered the attack and PROTAG-dono, heroine and the bloke who doesn't matter cause he isn't PROTAG-chan are demanding his crest and domain for breaking a treaty, also did you know heroine is a rainbow mage?! of course you did and what's this? a third combat scene? nope, villain strikes once and is defeated and PROTAG-tan takes his crest. PROTAG-kyun is heroines pawn, after meeting her he did literally nothing on his own, also do you remeber how he was special because he didn't belong to either faction? well heroine decided that now that he has claimed the domain he will join the alliance... Thoughts: Just don't, at best everything is average, at worst it's bland and bad. 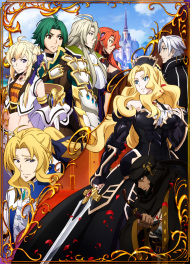 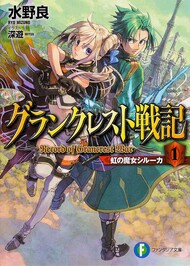 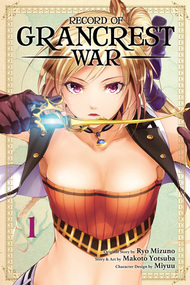 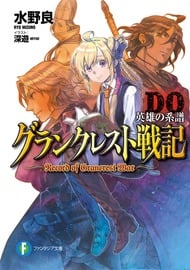 Record of Grancrest War DO: Eiyuu no Keifu (Light Novel)