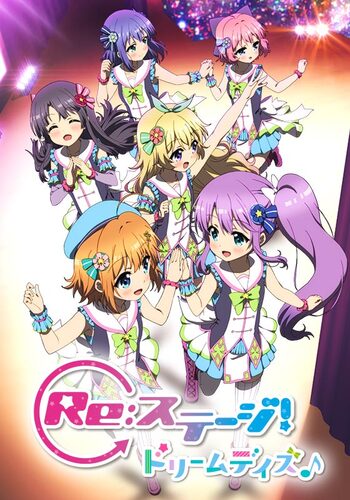 With watching genre pieces as BanG Dream!, Love Live! (the whole smear from SIP to Superstar), K-On! and D4DJ, I have a handle on the general scheme.  Girls have a desire to become idols.  The team assembles (usually over the school council's dead body).  The team gels despite personality issues.  Music ensues, some good, some bad, all upbeat.  The team performs at the 'big gig.'  The results … ultimate victory not quite at 100% certainty.

ReStage Dream Days runs through the identical formula, but not with a strong enough plot.  Characters are there, but not with the same level of consistency as those from the proven series.  In fact, once the team forms, the idol wannabes pair up, and are usually bonded together by some defining trait.  Mana has come to the branch school of an academy known for their forceful and demanding processes of cranking out idols.  Mana has snapped under that pressure and has come to a school where there is no stress on manufacturing idols.  There she meets Sayu, and girl who wishes to be an idol, though her mother wishes to crush that dream.  Sayu recognizes Mana's talent (Mana did learn something from Idol Tech ... and has the nightmares to show for it) and convinces her to form an idol club.

Next pair.  Mizuha is the president of the Traditional Dance and Song Club and is open to have an idol team train there, although Mizuha is a slacker with no sense of rhythm.  However, Minori (aka Mii) is the student council vice president who has a history of rejecting Mizuha’s proposals for a recognized club.  Hypocrite, as Mii has the same idol dream, and once she removed the glasses and lets down her hair, she is quite the performer.  Mii's pushy nature contrasts beautifully with Mizuha's laid back style.

Last pair ... the eccentrics.  Kae is a computer geek whose knowledge of idol-ness is phenomenal (she has developed the technology to spot an idol through rose-colored gizmos) ... and she has the pipes for performing.  Kasumi is a girl who sold her persona to develop a techno-idol and has retired to the ruthless world of survival games.  But Mana convinces Kasumi that talent is one's own, and now all six girls are out to win the prestigious Prism Stage.

Ah, but there are complications.  Idol Tech has created the pinnacle of idol groups, Stella Maris.  Oddsmakers see SM as invincible, and Kae's computer calculations figure chances of defeating them at 0%  And, worse of all, Mana's big sister Aone sings for that group.  But encouraged by fellow idols Ortensia, and not put off by the scheming, spying Tetrarkhia, Mana's group KiRaRe battles into the final four of Prism Stage.

The animation is so-so with its light coloration schema and blend of static shot to loose choreography.  Nothing spectacular, but it does the job.  The music is just as paltry, as the selections are one and a half minute ditties on the usual subjects.  Even KiRaRe's last minute alteration of their original competition piece is no real improvement.  But the animation of the KiRaRe performance in the last episode demonstrates a 'pull out all stops' approach.  One excellent 90 second portion out of twelve episodes.

The plot, however, is chucked full of inconsistencies.  The major one is Mii's attitude toward idol groups, which she constantly rejects, even though she is a member of the team.  Then there's Mana 'wanna-be-don't-wanna-be' an idol shtick.  And Sayu's mother's conversion from idol aversion.  The series ends with KiRaRe accepting a challenge from Tetrarkhia in a battle of the bands, but where the Traditional Dance Club goes after that ... a mystery.

ReStage Dream Days is Pony Canyon's attempt to offer up their cloned version of the idol genre.  It is at best a weak rendition, and I am not sure if the 2019 product will see a second season.  My opinion ... when will Love Live! Superstar begin season three.  Now, there's quality!