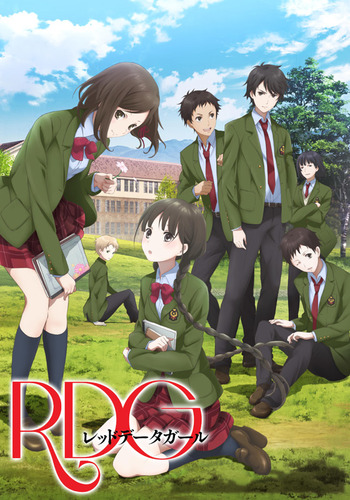 This anime had more holes in it than swiss cheese on top of a donut. I really wanted to like this anime, but, the entire thing, save for the animation itself fell incredibly short.

I have four words to sum up the plot. All Over The Place. . .

I kept thinking I was missing an episode for some reason and "Why is this happening? and "I don't get why this (insert object, person, episode) is relevent?!!?"

All of the of the plot lines never quite connected. I feel like this could have been resolved by there being at least 20 episodes instead of 12.

Not really noteworthy. There wasn't enough effort put into developing them. I did not feel very strongly about a single charachter.

Average overall. The intro and outro songs were nice which is why I gave it a 7 instead of a 5.

I feel that this show was pretty much a waste of my time. It had a lot of potential and in the right hands could have been a really amazing anime. So many things were left unexplained. . .

Before I start, I would like to mention that this review will most likely contain spoilers. If you do not want this show to be spoiled for you, then read no further.

There, now that that's out of the way, let's start the review proper. This supernatural slice of life drama had been on my radar since it aired, but I never got around to watching it until I got it recommended by my Secret Santa.

It starts out quaint enough, introducing us to the female lead, Izumiko, that lives on a very pretty mountan with her odd guardians, what with her parents being else where most of the time. She is immediately set apart from the rest of her peers, not just only by her sheltered upbringing but also the fact that she has odd powers. Shortly after that, we get introduced to a new character: Miyuki, Izumiko's new companion – or manservant, as they say – with severe attitude problems. The show got way less fun to watch when his bratty teenage moping got way more screentime than I felt it warranted. I am glad that phase of his it ended after a few episodes because any more of that and I would have rated this show much lower than I did.

After a few episodes, they transfer to a new school. Of course, there is more going on under the surface than what a momentary glance will reveal, and this school is trapped up in a power struggle between two factions. This is pretty much kept on the backburner for most of the show's run, and there's a lot of other smaller arcs happening as well. Sadly, none is very entertaining to watch, and the mixture of slice of life and small drama arcs makes the show feel like it lacks coherence and a sense of direction, even though the arcs are never outright bad or left without a proper conclusion.

There is never a sense of urgency to the conflict because so little is outright said or explained, nor does the show tell us why we should actually root for the protagonists  – simply being protagonists is really not enough – until the very end. The antagonists are also pretty loosely defined, without any clear and defined motivations. Because of that, I found myself lacking interest throughout. It felt like it tried to be suspenseful, but in the end it was just tedious and unengaging.

The characters are thankfully way more consistent than the plot, but they're still very unremarkable – forgettable even – especially the secondary characters. Izumiko and Miyuki are the only ones that I would actually call rounded, developed characters, and even they are nothing to write home about. Miyuki goes from being an annoying, callous and self-centred brat to a more understanding and tolerable person in the first few episodes, but he is otherwise pretty static.

Izumiko is the most human of the bunch, and yet I can't really bring myself to like her as a character because she doesn't really stand out and I really can't emphasize with her struggle to become normal, mainly because the anime treats it in a rather off-hand way most of the time. It's a real shame too, since it's a great concept, but there is little done to actually utilize it in a good way.

The soundtrack is good, which some really nice moody tracks in the OST. The opening and ending songs are above average as well, and more importantly: they are very good at setting the mood. With their mellow and slightly ethereal moods, they're pretty much a perfect fit for this show.

As for what I think of the show as a whole, it left me feeling very ambivalent throughout. Every good thing about it was tempered with parts that were not very entertaining, but most of the time it was as dull as dishwater to me, with a lot of episodes feeling like they were thrice their actual runtime. The plot and setting showed promise but it never delivered, so instead it ended up being just a waste of great production values for the most part. The show really could not decide what to be and did never really play to its strengths, which is a crying shame. I really wanted to like this more than I did, but it just ended up feeling like an average watch. The setting was good, the animation was stellar and the soundtrack was great, but it lacked character and staying power. Furthermore, the ending was rather by-the-numbers and felt really unsatisfying to me. A modern fantasy based on Japanese Shinto legends. Suzuhara Izumiko is a 15-year-old girl, who has been raised and protected in a shrine deep in the Kumano mountains. She is quite shy and destroys all the electric devices she touches. When she begins to think about going out of the mountains and moving to the city, her guardian Sagara Yukimasa recommends her to enter a high school in Tokyo and forces his son Miyuki to serve Izumiko for life. Miyuki and Izumiko repel each other but their relationship begins to change when a terrifying accident occurs on the school excursion. Izumiko learns her fate as the last representative (yorishiro) of a Himegami goddess and Miyuki learns of his duty as a guardian Yamabushi of Izumiko.

The plot was actually really interesting, if slightly confusing at times. Since it's a PA Works production it goes without saying that the animation is gorgeous! It was so lovely at times that I simply had to pause it to admire the beauty. The soundtrack was also wonderful and I didn't have a single complaint in that respect. The characters, on the other hand, were somewhat iffy. It was a struggle for me to like Miyuki and Izumiko in the beginning. Izumiko was just wayyy too meek and just let everyone around her control what she could and couldn't do. Even down to her hair style. She didn't question things when she should have, and she shyed away from people who attempted to pull her out of her shell. Eventually she started to change and she grew on me (I quite liked her by the end). Miyuki didn't leave a good first impression, at all. He was this bratty prick that you wanted to smack the crap out of, but he begins to change the more he hangs around Izumiko. She made him more human, and far more approachable. I actually began to like him around halfway through. The triplets were interesting as well. The puzzle on how their relationship worked was fascinating. I particularly liked Masumi, he was such a fascinating character and while in the end I wanted Izumiko to end up with Miyuki, for a while there I almost rooted for Masumi xD However, I did not like Miyuki's father, at all. The guy was an even bigger prick than Miyuki originally came off as! The way he bullied his own son and talked down to him ... urgh! >.< I also hated how he was always 'Himegami' this and 'Himegami' that and completely pushed aside Izumiko. It really pissed me off! >.< Anyway, I disagree with the AP rating for this anime. It's far more entertaining than I was led to believe. I gave it a shot 'cause I'm a big fan of PA Works and I'm really glad I gave it a go! I enjoyed myself!

Right, so I had really high expectations for this story and it left my thoroughly disappointed.

I'm sure the story was aimed to be interesting and deep and make you think and all, I couldn't keep up with the story and eventually out of frustration googled the plot to read and understand.

Despite the lame storyline I simply adored the animation. I loved it! It was some beautiful art.

There was a few iffy little soundtracks and such, and the opening songs I don't listen to them unless they're really good so...

Throughout the story I just couldn't get attached to any of them, except Wamiya of course, he was real cutie. I have a weakness for villains cx, though the one to devolop most was that Mikya guy. From rude brat to understanding brat.

As harsh as this sounds this anime was total waste of my time and I really didn't enjoy it that much.

I loved it. I absolutely loved it. This was such a heart felt anime that spoke to you. This anime was calm but so intreging it left you wanting more. The characters are so lovable, the art is beautiful.

Occasionally a few things that happened felt rushed while other things that weren't as important felt as though it took a lot of time- but it wasn't a big enough deal for me to say it bothered me.

I watched this anime dubbed and I think they picked a wonderful cast for all the characters especially the main character's, I also loved the opening and the closing.

In particular I loved how you saw the main character change slowly and open up throughout the anime and not just in one episode.

I think anyone who likes spirits and beautiful artwork and a bit of a love should give this anime a try.