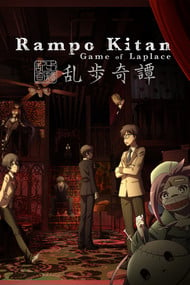 Haiiii~ (~^▽^)~♥ Are you a fan of the mystery genre? Do you love detective anime? Well say no more, this anime is for you! Despite the fact that this anime is definitely NOT a typical mystery/detective anime, I sort of like the way it is presented. This anime has it all, interest for death/crimes, crossdressing, ''mature'' themes that are not taken seriously, the show has homo moments which are liked by some fans, etc. However, for some reason I am really enjoying this anime so far! So, let's get into details! STORY The story focuses on a small ''VIP'' detective group. The three of the main characters are often found in very unusual situations involved in crime. It's on to them how to solve those mysterious crimes. Watching episode by episode each week, I noticed there's not much mystery going on, which was sort of disappointing. The way they develop the story in each episode is sort of unusual, but it all makes sense in the end. The whole process of solving crimes is kind of... blunt? However I don't think it makes the show less interesting. There is humor and some bits and moments that make the show more fun to watch. I do like the fact that this anime is briefly based on mystery novels written by Edogawa Ranpo, the most famous being the ''human chair'' that is featured in episodes 1-2. And considering the style of this anime, I can say I'm impressed that it's based on novels. Now thinking, the whole story was fun and interesting for me, but I do see where a lot of people are annoyed. Pointless crossdressing and fan service. Story going in many directions etc. Therefore, in conclusion, I did like the story but I see why people have issues with it. I'll give it a 6/10 ANIMATION The style is somewhat cold, dark and cute in a way. The way characters are animated is okay, BUT I do see where they ran out of money.  The relevant characters are drawn well, but those who aren't relevant are just grey figures. I've seen this before (f.e. Durarara!!) but those shows have done it much better. So I do mind that. I can't deny that some parts of certain episodes were REALLY well animated with a lot of detail and effort (f.e. episode 11) There are a lot of cute-ish moments and bubbly animation and such, but dark elements of the show are presented well. I would even say that the show focuses on ''shock value'' to some point, at least when it comes to murder cases. So basically, I like the style and it's definitely not badly animated, but I don't like the partial minimalism. 7/10 SOUND I LOVE the OP song, very catchy which I didn't really expect.  Sound is... okay. My perfectionism is noticing some bits and pieces that weren't done well but I'm not going to go into details this time since I had complains about it haha I do like the voice acting and the music is fine. 8/10 CHARACTERS So I did a little research (don't be so shocked...) and it appears some of these characters are characters from the before mentioned novels. I'm not sure about the shota lord Kobayashi, but Kogoro Akechi is a characher in many mystery novels. Back to the anime, the main character is a dude, surprisingly enough. Glad to see the ''trap main character surrounded by death'' trend is still active in the anime industry. Jokes aside I do think that the main character is adorable despite being mental and having an extreme death fetish, and his friend who is overly protective for some ''unknown'' reason is cool as well. There wasn't that much development when it comes to some characters but I'm content with how it all turned out in the end. I must point out that all of the main characters are SO YOUNG. When I was 14 I was watching pokemon and playing online games while these guys are trying to find out who makes chairs out of human flesh... *sigh* I love all the characters, there is a lot of difference between them and that is a good thing. It does miss some development, so I will give it a 8/10 rating. OVERALL I like this anime! It doesn't have a nice overall rating, but all the fans of detective/mystery anime should enjoy it to some degree. The story is... watchable, animation is decent, sound and characters are well done, so this anime is not really bad! Soo, I will give this show a 7/10 That's it! Thanks for reading my review! I'd recommend this anime to everyone who likes a twisted, murder filled detective anime! Rate if you found this review helpful, funny, or just like it. I have more anime reviews so check them out if you want! Thanks and have a nice day ^^

For me, this is one of the worst anime I have ever watched.I find characters absolutely unlikeble, but the story itself and whole anime composition is what makes this anime one of the worst. Only thing which I like about it is obscurity. It jumps from being funny to trying to be scary or sad in an instant. For me it does not do any of those: it is not funny, nor scary or sad. Mysteries are very badly written and almost episodic, and they use name of Edogawa Ranpo just to gain popularity. When mystery is solved you don't feel anything, you don't get attached to anything or anyone. They try to make you sad with some cheap and overused tricks that just don't work anymore.  It has some of redeeming qualities (well, kind of), like music and animation, but the story and characters are so bad it hurts. Voice acting is okay, not bad, but not especially good either. I think I will finish this anime, it is not the kind I drop (It is so bad it is good), but there is not even a slight chance my opinion of it will get better.

Ranpo kitan is a weird anime. It starts promising, a mystery and gore combined, with a detective work to be done. But the illusion is soon dispersed. There is barely any crime solving, and the answers are given to the audience plainly.The main character (?) Kobayashi, often serves no purpose but to be a trap flavour. Now I don't have a problem with traps, cross-dressing or boy love, but he simply is redundant in the series. The real character is Akechi -- he has a backstory and an actual personality. That of a typical conflicted prodigy, but a personality nonetheless. The show's strength are its secondary characters - the Shadow Man and the Black Lizard were one of the more enjoyable parts apart from the introductions of the crimes.Ah, the crimes - they are pretty to look at. Gruesome, true, but pretty at the same time. Too bad that the show makes them irrelevant by terrible pacing. Most of the crimes are pictured in one or two episodes, including travel, dialogue, interjections, backgrounds, etc. Again, the investigations are non-existent. The first arc was quite captivating, and the introduction of the 20faces was interesting, but terribly executed, with clunky narration, omission of crucial details in the present narration (the policeman's sister...) and rushed ending. I do have to admit that even though everything was rushed I was able to produce an emotional response to the second, the concrete arc, as well as to the main victim of the police part the 20faces arc. Weirdly enough, we get a filler episode after that, and then there is an introductory episode to the Islands arc, which develops the 20faces plot. Now this crime scene I find the prettiest. The animation and execution of the mannequins is splendid. That is as far as anything of value in the arc. The next one starts a plot about Akechi's past, which turns out to be one of the most senseless series of plot twists I have ever witnessed. The transformation of the medical assistant into a second class villain is, well, uncalled for and pointless.As for the science involved, the producers throw the chaos theory and the Laplace's demon around as if the audience has every knowledge on the subject. It is a part of noitaminA, yes, but this is just another example of senseless rushing through the series (which has a filler episode!). It, as far as I know, is never explained how exactly a program with calculations influences reality. It's simply said that it does. Well, that's an explanation on the level of "It's magic, I ain't gotta explain shit". I find it to be extremely badly done.All in all, with a redundant, fanservice protagonist, horrible issues with pacing, meaningless investigation process and lack of mystery in mystery anime, I still find the series to be really pretty, and technically absolutely greatly done. The music is on par with the animation, too, opening, ending, and ost alike. If only the anime had been directed in a different way, it would be a much better show. As it is now, it's a huge disappointment with a terrible and anticlimatic finale.