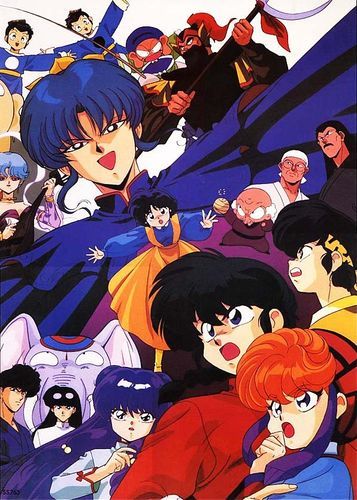 Story was pretty good. Plot starts out as something that was instigated by that dirty old man Happosai and then turns out to be a fight for Akane.

Animation was good, not going to much into this, if you've read some of my other reviews ya'll know I loves me the older style. Sound was ok, always something in the back of my mind for the older ones that I think the sound is a little off, but it did have some good Opening and ending themes.

Overall this was a good watch, I would recommend watching the series to know why everyone acts the way they do to avoid some confusion. Other than that it is something fun to watch.

If you've seen the series, OVAs or other movies (although this is the first), then you're pretty well versed in the usual plot devices that the Ranma 1/2 package usually employs. We're greeted by the usual rascally perverted (mildly criminal) behaviour from Happosai, the incurably female-obsessed martial arts master and founder of Anything Goes Martial Arts. His opening sequence 'panty raid' is used as a haphazard and faithfully predictable flowing introduction for most of the usual cast members, who are often casting their ire toward Happosai's antics - and this is no exception.

Basically, Happosai is again the catalyst for the pickle (pardon the pun, which will become clear soon), with his long-past encounter with a Chinese woman named Lychee, who has tracked him down to exact revenge for a broken promise, and for 'stealing her childhood'. The teenaged Happosai met Lychee in China, and saw that she was about to be sacrificed so as to unify the scrolls of the Seven Lucky Gods. Spurred into action to save this young woman, Happosai steals half of the scrolls, and is nearly killed doing so - not that this elicits much sympathy from anyone.

Lychee holds one half of a sacred scroll that she professes is destined to be joined with the other half, which is held by her 'true love' who will take her away and 'live happy ever after'. The problem is, that when Lychee confronts Happosai in a dramatic sudden appearance on her elephant, Jasmine, Akane happens to catch the wayward half-scroll that Lychee throws at Happosai in anger. Suddenly, a huge airship appears (and I mean a huge flying wooden ship, complete with searchlights, sails and rigging) and Kirin, the master of the Seven Lucky Gods Martial Arts appears with great aplomb, and promptly identifies Akane as the one 'chosen' to go with them as his future wife, and kidnaps her... because she was the one stuck holding the scroll at that fateful moment, instead of Lychee, who is rebuffed immediately by Kirin because she was not holding the scroll.

The rest of the crew attempt to prevent Akane from being taken away, including Ranma, in his customary 'hero to Akane when necessary' role, but they are quickly shown as no match for the Seven Lucky Gods martial artists, and so Akane is whisked off back to China against her will.

The usual hilarity ensues; each character somehow weasels their way into the action plan, even the intensely poetic, yet hapless Kuno, who offers his boat to help set them on their way to China to rescue Akane from a forced marriage and a diet of nothing but pickled vegetables and plain rice (the only fare the Seven Lucky Gods martial artists ever eat).

Thrills, spills, new martial arts techniques, courage, defeat and the same character dynamics play pretty well verbatim from the rest of the Ranma 1/2 body. And this is both what makes this movie a fun addition to the series, and what maintains the maddeningly static formula. It's the same criticism I've always had about this series; that it never, ever learns from itself, and while this makes it the simple comedic production that it is, it is that unwavering dynamic between all of the characters that makes this so frustrating to keep watching. It's like Groundhog Day. Tomorrow never comes for the major feature of the story: Ranma and Akane's reluctant relationship. It's a consistent loop; Ranma and Akane at each other's throats, sometimes working together, Ranma sometimes saving Akane, the 'almost' confession, or the childish, insultingly vehement denial of feelings, the constant conflict arising from unwitting love-triangles with Ranma and Akane gormlessly buffeted around in the middle etc. etc. etc.... It's all here, just longer than the average episode. But, all that said, this movie has an uncanny ability to keep you watching.

The animation hasn't aged too badly for the late eighties/early nineties. The characters are bold and distinctive, and the colours/backgrounds are well executed. The motions are smooth, and the fight scenes are good for their day. The simplicity of the visuals doesn't take anything away from the movie in general.

I've heard both the sub and dub of the Ranma 1/2 collection, and both aren't too bad - which is saying something, given that I generally much prefer subtitles on anything I watch. The English didn't sound too cheesy or forced, and generally hit the mark on emphasis... but that couldn't be all that difficult to do with a simple ecchi/romance action movie. The Japanese VAs were fine, nothing flash, but they carried the job off evenly.

Given how much I've moaned about the baseline premise and the repetitive chrarcterisation, I should probably justify my solid 7 overall rating...

To be perfectly honest, this was the absolute first anime I ever tried out, outside of DBZ/Sailor Moon, so this movie/series holds much nostalgic affection for me, which probably ramps up the point total by a little. However, despite the formulaic approach of the collection in general, looking at this as a standalone movie (and the series too, if you're a fan of anime that can't be called tsundere because the female never really warms to the male for any length of time), it really is worth a watch if the tags appeal to you. It's charming, funny, and has just the right amount of fanservice and surprises around the corner to keep you interested.

A solid 7/10 for an easy-to-watch movie for a rainy afternoon in.