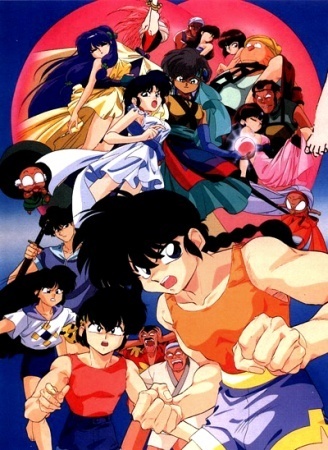 Ranma and crew find themselves shipwrecked on an island in this adventure. While everyone is having fun on the island the girls start disappearing and they soon find themselves kidnapped by a prince of an island who is searching for a bride. The island is also home to a magical water that turns anyone or anything into a man, which sparks the interest of Ranma and the other guys with the problem of changing when they get splashed with cold water.

There isn't anything overly spectacular about the animation or sound of this movie. For a Ranma 1/2 movie the action animation isn't as good as some of the others. Still both sound and animation have decent quality to them so as long as you don't have really high expectations there's nothing to complain about.

This movie is one of the less action oriented Ranma 1/2 anime, though it does have a couple of good action sequences. It has a playful, not too serious mood throughout the anime. It also has a bit more fanservice than usual Ranma anime as the girls end up in scantily clad outfits while they're possible candidates for the prince's bride. There's plenty of good humor in the movie with each character up to their usual antics, such as Nabiki enjoying the life of a queen, Happosai raiding the women's wardrobe and Ranma accidentally pissing off Akane. If you're a fan of Ranma 1/2 or any of Rumiko Takahashi's anime then you're likely to enjoy this movie.