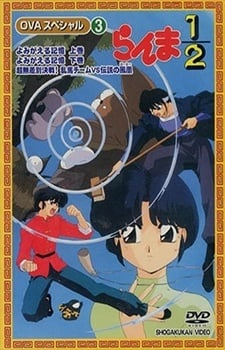 Kotaro Shindo is a skilled karate expert, sole member of the Kyokutan-ryu Karate Club and an uninhibited pervert. He spends time feuding with the Student Council and Discipline Committee, along with various clubs within Tsurugamine High School, due to his habit of stealing panties, fighting, and his trademark rule breaking hair.

This total loser, Tatsuhito, causes the legendary gang leader of the Grand Cross, Shou, to be hospitalized. He must take his place for the duration of time it takes for Shou to recover or else the Grand Cross would fall into chaos.

At Jinpu mountain, Chinmi Tao Ryuen is a student at the Korin temple. Every one at the temple sees him as the weakest, even the younger students don't show any respect for him and make fun of him as soon as they get the chance. But when he suddenly is in the Bout challange (this Bout of the champions is intended to choose the best student to receive a special lesson later on) and the other challanger is the powerful Kuen.

Hana Yanagi is just fifteen and aims to be the best judo practitioner in his village—a remote hamlet that just happens to produce the world's most powerful fighters. Get ready for hardcore over-the-top martial arts action!