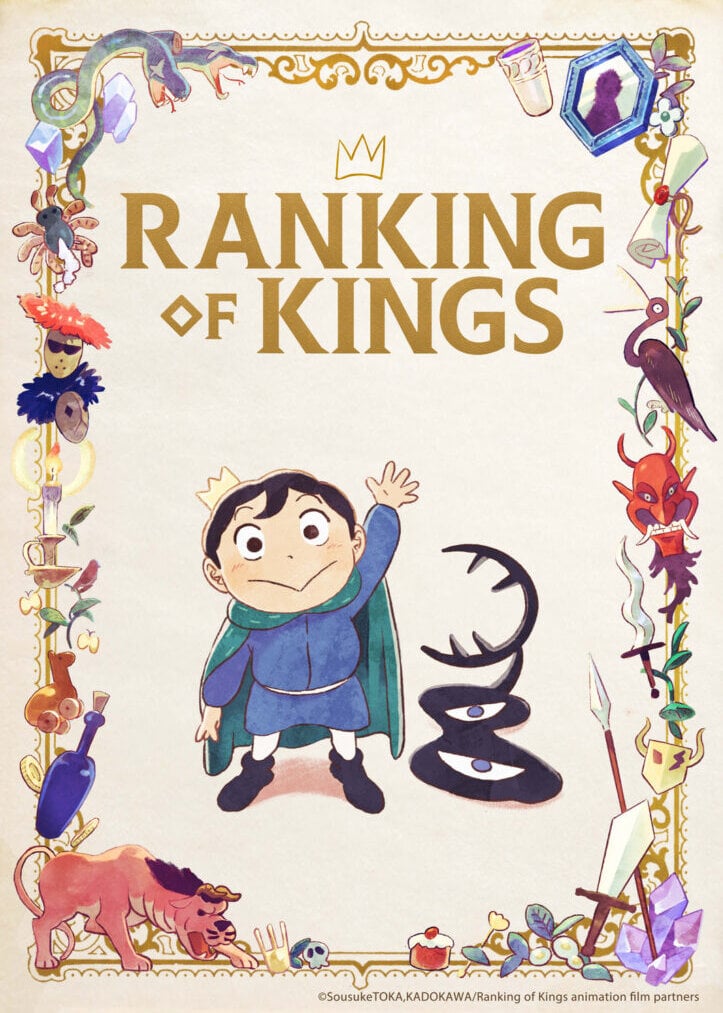 Honestly everything in this anime is amazing. Hell it might even be anime of the year for me, but I digress.

The story is quite interesting, it sets on a world where kings are ranked based on many things: population, economy, the king's leadership, etc.

Among the thousands of kings out there in this fantasy world, King Bosse ranks 7. Renowned for his strength, everyone expected his son to be as strong and big as him... though those expectations were not met. Our adorable (and incredibly cute) first prince Bojji is both mute and deaf, but he makes it up with his amazing ability to observe. He meets with Kage, who was once part of an clan of elite assassins, and begins their wonderful friendship with each other.

The world looks like any other fantasy type-beat but it's significantly different than what you would expect. Why was Kage's clan cursed to look like that, why it was eradicated, who created the king's ranking system, and much more. Its very indulgent to slowly watch the answers getting revealed one by one, while also creating even more questions.

Don't be fooled by the childish style, because it includes everything you could ask for, badass action, unique monsters, and quite a lot of violence. Both the OP and ED are an absolute wonder to hear - King Gnu performing for the OP and yama performing the ED with its fantastic story book animation style.

Tldr: it made me cry in just two episodes, that's how good it is. Watch it. 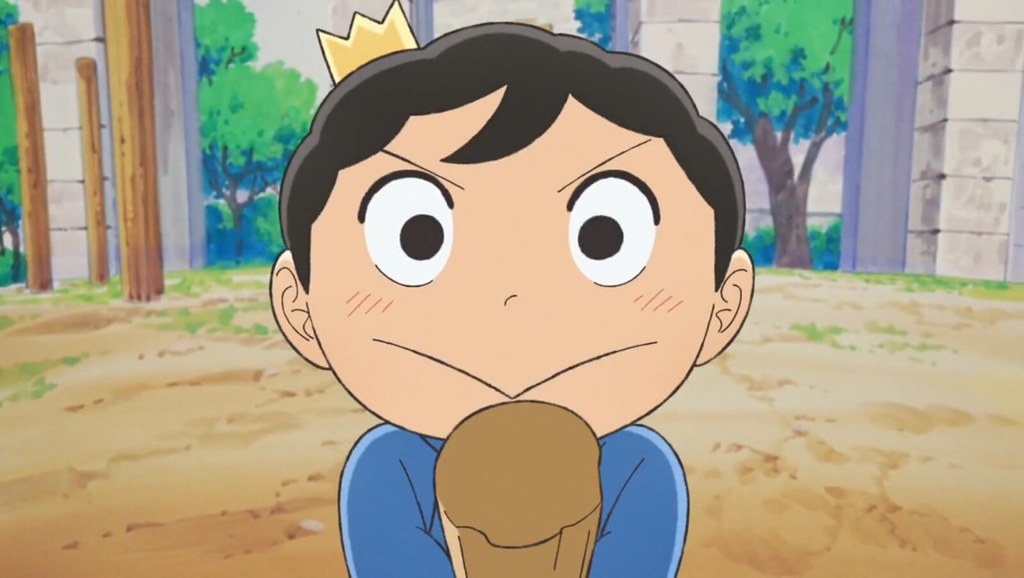 I know it might be too early to review Ousama Ranking but from what I've seen already it's panning out to be one of my personal favorites already! At least reach Episode 2 to decide for yourself. The story follows a young prince that is deaf and is first in line to become king but the people and even his own family don't believe he meets their expectations of a king, so he is determined to prove them wrong after he meets his first friend ever in the form of a mysterious shadow. The story seems simple at first but starts to get a little complex with twists and turns with moments that had me thinking it was a episode of Game of Thrones, and don't let the innocent art style or characters fool ya, Ousama has it's dark and violent moments but it also has it's sweet and truly engrossing moments, as well as this funny charm to it.

Ousama has a solid cast of characters that are well written from what i've witnessed, and 11 episodes in, the show has made me shed a tear almost every episode and thats thanks to the main character Prince Bojji. Bojji is everything you want from your MC, determined, sweet, brave and one that always has a smile on his face, but behind that smile we slowly peel back the layers every episode and we start to see his true feelings and that alone shows how strong he really is. His co-star is Kage, Bojji's mysterious shadow friend who is the last of his kind who were assassins. He is ruthless and sneaky at first but after meeting Bojji he becomes curious and slowly changes heart, ultimately befriending Bojji. The two are supported by some really well written and quite complex characters that will have you thinking whether they are good or bad.

Studio WIT does a great job with the animation here, the art style is almost that of a Studio Gibli style - think Ponyo or even Ni No Kuni, this might be the one thing that will have some avoid the show, for me I thought it's a nice change to what I've seen lately and it's easy on the eyes, the colors are beautiful and even the action fits nicely. The voice acting is packed with talent, with the likes of Ayumu Murase (Hinata from Haikyuu!!), Yuuki Kaji (Eren from AOT) and Daiki Yamashita (Midoriya from My Hero), followed up with some great music in the show with a solid opening song by the awesome band King Gnu. Overall Ousama definitely deserves a peek into because it possibly might be the sleeper Anime of the Year.

TL;DR - It starts surprisingly good, but has gotten kind of weird.

Okay, hear me out - I'm not giving this a worse rating just to be contrarian to the other reviews here. When I first started watching this show, I was also totally sucked in. Based on the description and the art style, I didn't at all have high expectations for it, but I was pleasantly proven wrong even after just the first episode.

This show does what many other shows don't, which is flesh out characters and their backstories. I'm really a big fan of Kage, and of course our very own MC Bojji is just a cute little guy doing his best, and that makes you want to root for him so hard because he's so endearing. Seeing Kage so supportive of Bojji is so heartwarming because based on his experiences, he should be a jaded, angry, and resentful guy. But Bojji brings back the light in him.

Similarly, you're given the impression that multiple people are evil and malicious, but it turns out that actually, they're just really misunderstood. That's a pretty common trope in anime, but in this show, it's done in a tasteful, meaningful way that's not cheesy or dumb* (*for some characters... read on to find out more). Imagine a piece of crystal that seems ugly and dull, but then after rotating it and observing it in the sunlight, you finally find the right angle where the light just gleams from it. That's how much depth many of these characters are given, and it really gives this show a whole new immersion I wish other anime had.

And all of this is just in the first 5 episodes or so, and it's so powerful and really just incredible to watch.

But having sung its praises, now I need to get into why I didn't rate it very high. Starting from about episode 5 or 6, shit starts getting really weird.

The problem is that the same depth of backstory and motivations isn't shown for all characters. Where this is notably lacking is in the antagonists or people who turn against our main character's camp.

Arguably, the most important characters are the main antagonists, but nobody has any idea what the fuck they want. I have no clue what their motivations are, and when there's no clear goal, there's no clear conflict. People are randomly tested and assassinated. I can't tell who's an enemy or a friend anymore, people keep flip-flopping, one minute you think they're evil, the next, oh it turns out they're good? For these characters, that "misunderstood" trope doesn't work because, again, you have no idea what they want even after 11 episodes.

The show starts off really heartwarming and interesting and then suddenly several episodes in, there's graphic violence. Like a dead body getting ground into a liquid. Lots of warfare. Limbs getting cut off. Lots of puking. It totally threw me off.

I can't really say any more without spoiling hugely important things, but to sum things up, it started out AMAZING and now I have no idea what the storyteller is trying to tell us. I'm gonna keep watching and see how they tie all this together. Maybe there's some hidden genius here I'm not picking up, but it sort of feels like it's unraveling a bit

I just have to say this is a masterpiece in every way, its confusing but in a good way, people seem human and complex with many layers. Most the time youll be suprised by where its going but for people who dont like a suprising plot with twists and turns then Id reccomend another watch. For me though I think this is the perfect anime so far.

you will love the animation, the pace, the story, just everything!!!!

watch now, you wont regret it