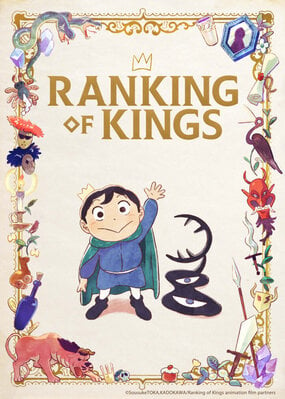 Ranking of Kings was a standout in the roster of 2021 by looking like a European fairy tale. It also began as a typical underdog story about a weak prince nobody takes seriously trying to win his right to the throne, before becoming more elaborate by including themes such as psychological issues and political intrigue. Unfortunately it doesn’t do much from a point on and thus it never escapes the fairy tale vibe it began as. Most of the conflicts are resolved way too fast and in ways that insult your intelligence.1) Selfish people and traitors will be changing their mind when they see the prince cry a lot or never give up, and will be forgiven almost immediately. 2) Bad guys are turned into misunderstood people with a last moment sad flashback that is making them tragic in an instant (even if they have caused harm to thousands of innocents) and are never punished. 3) Most negative consequences such as fatal injuries go away before you know it. Also fake deaths are abundant.4) There is no sense of tension or high stakes when betrayals, horrible acts, and injuries can be undone so easily. It wouldn’t be a problem if the author never made it seem like stakes exist, but he does all the time and constantly deflates every conflict with cheap fixes. It’s nice to see a show taking a more serious approach with its material, but let’s not pretend it does an exceptional job. The lack of negative consequences make it come off like yet another escapism fantasy for people who wish they will be forgiven for all the shitty things they have done, simply by crying a lot. We live in a society where someone can have his entire life ruined by eating a jelly bean, and the easiest method for making people forget all the crap you have done is to manipulate them through their emotions by crying in front of a camera. Ranking of Kings relies way too much on people crying for making you think they deserve a happy ending instead of punishment for all the crap they did, and it reaches levels of insanity the closer it gets to the ending. One of the characters is even given a marriage proposal as a reward for crying despite being the most horrible person in the world. Also ignore anyone who considers this to be an instant classic or something as grand as that. It’s a very niche show that appeals to fans of fairy tales who seek something more elaborate. Most casual anime fans will not bother watching something that looks like a European fairy tale or will not be fond of a simple coming-of-age story they can find elsewhere, preferably with magical samurais and big titty ladies. As for the veteran watchers, they will most likely dislike how it gives a happy ending to people that deserve years in a torture chamber.

Honestly everything in this anime is amazing. Hell it might even be anime of the year for me, but I digress.  Plot The story is quite interesting, it sets on a world where kings are ranked based on many things: population, economy, the king's leadership, etc. Among the thousands of kings out there in this fantasy world, King Bosse ranks 7. Renowned for his strength, everyone expected his son to be as strong and big as him... though those expectations were not met. Our adorable (and incredibly cute) first prince Bojji is both mute and deaf, but he makes it up with his amazing ability to observe. He meets with Kage, who was once part of an clan of elite assassins, and begins their wonderful friendship with each other.  The world looks like any other fantasy type-beat but it's significantly different than what you would expect. Why was Kage's clan cursed to look like that, why it was eradicated, who created the king's ranking system, and much more. Its very indulgent to slowly watch the answers getting revealed one by one, while also creating even more questions.  Animation and OST Don't be fooled by the childish style, because it includes everything you could ask for, badass action, unique monsters, and quite a lot of violence. Both the OP and ED are an absolute wonder to hear - King Gnu performing for the OP and yama performing the ED with its fantastic story book animation style. Tldr: it made me cry in just two episodes, that's how good it is. Watch it.

UPDATE: It got worse. To be fair, some review comments made me reconsider my score for the animation. I really, really don't like the art style, but the animation is admittedly done pretty well so I updated the score from 5 -> 7. But aesthetic and art style are a part of the animation score, and I hated it, so I will not go any higher than a 7. Story was downgraded from 7 -> 5, characters were downgraded from 5 -> 4. I stand by what I said when I reviewed this previously. There are things the show did well, especially certain emotional moments and characters. I really enjoyed Hiling's character arc, and some of the side characters like Kage and Despa were some of my favorites. But as others have pointed out, there are a lot of stupid plot twists and sudden flashbacks/misunderstandings to redeem characters. The writer(s) couldn't figure out whether this was a super serious show about interpersonal, political conflicts or a light-hearted adventure of a weak boy rising to power amid numerous villains and allies. So we got this show that ended up being a half-assed mess of both. Feels like the writer(s) desperately wanted everyone to have a happy ending and forced a bunch of stuff in. This confusion was probably what made me feel like there was something off about this show, but I couldn't put my finger on it before when I first reviewed at only ~12 episodes in. Some characters (e.g. Hiling) were consistently expanded upon and grew alongside the show. They didn't really expand on Miranjo as a character until way later in the series, but even then her bizarre actions at least had some kind of reason behind them. But then other characters like King Bosse were not only left unexplained until near the end, the explanation didn't make any sense. He played a major role as an antagonist and yet at the same time still felt like a bystander to the entire situation. Even once the series ended, I didn't ever feel like I was bought into what he wanted out of the entire ordeal and why. ** SPOILER ** Daida wanting to marry Miranjo was a complete WTF moment. ** END SPOILER ** For other people who commented on this review, you need learn how to handle people disagreeing with you. My comments weren't even off-base or far-fetched, and you still got so triggered and felt the need to insult me. Kindly grow up --------- TL;DR - It starts surprisingly good, but has gotten kind of weird. Okay, hear me out - I'm not giving this a worse rating just to be contrarian to the other reviews here. When I first started watching this show, I was also totally sucked in. Based on the description and the art style, I didn't at all have high expectations for it, but I was pleasantly proven wrong even after just the first episode. This show does what many other shows don't, which is flesh out characters and their backstories. I'm really a big fan of Kage, and of course our very own MC Bojji is just a cute little guy doing his best, and that makes you want to root for him so hard because he's so endearing. Seeing Kage so supportive of Bojji is so heartwarming because based on his experiences, he should be a jaded, angry, and resentful guy. But Bojji brings back the light in him. Similarly, you're given the impression that multiple people are evil and malicious, but it turns out that actually, they're just really misunderstood. That's a pretty common trope in anime, but in this show, it's done in a tasteful, meaningful way that's not cheesy or dumb* (*for some characters... read on to find out more). Imagine a piece of crystal that seems ugly and dull, but then after rotating it and observing it in the sunlight, you finally find the right angle where the light just gleams from it. That's how much depth many of these characters are given, and it really gives this show a whole new immersion I wish other anime had. And all of this is just in the first 5 episodes or so, and it's so powerful and really just incredible to watch. But having sung its praises, now I need to get into why I didn't rate it very high. Starting from about episode 5 or 6, shit starts getting really weird. The problem is that the same depth of backstory and motivations isn't shown for all characters. Where this is notably lacking is in the antagonists or people who turn against our main character's camp. Arguably, the most important characters are the main antagonists, but nobody has any idea what the fuck they want. I have no clue what their motivations are, and when there's no clear goal, there's no clear conflict. People are randomly tested and assassinated. I can't tell who's an enemy or a friend anymore, people keep flip-flopping, one minute you think they're evil, the next, oh it turns out they're good? For these characters, that "misunderstood" trope doesn't work because, again, you have no idea what they want even after 11 episodes. The show starts off really heartwarming and interesting and then suddenly several episodes in, there's graphic violence. Like a dead body getting ground into a liquid. Lots of warfare. Limbs getting cut off. Lots of puking. It totally threw me off. I can't really say any more without spoiling hugely important things, but to sum things up, it started out AMAZING and now I have no idea what the storyteller is trying to tell us. I'm gonna keep watching and see how they tie all this together. Maybe there's some hidden genius here I'm not picking up, but it sort of feels like it's unraveling a bit