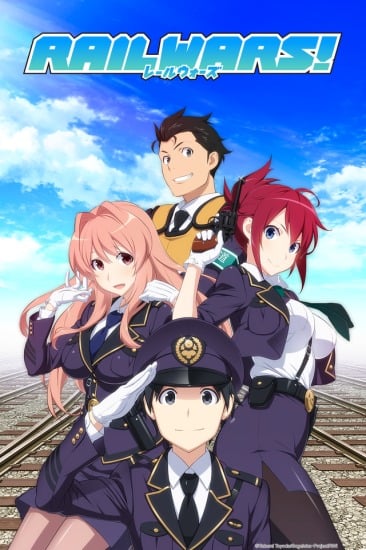 Takayama Naoto is a high school second-year who dreams of being a train conductor. In hopes of getting a job with Japan National Railways, one of the most stable businesses in Japan due to government support, Naoto has applied to an on-the-job training program for students.

Let Me Stay Like This for Just a Little While

You Were Really Cool

Don't Look At Me

I Thought It Suited You

Will You Keep This a Secret?

I'll Go With You

The government has passed the Media Betterment Act, establishing a military police force to stop the spread of "negative influences harmful to society;" and in response, libraries have organized their own military units to protect freedom of expression. After being saved by a Library Defense Force agent in a bookstore, Kasahara is inspired to enlist...

Rail Wars and Toshokan Sensou (also known as Library War) are two very unusual action shows. They both have a type of "task force" that is dedicated to protecting and serving something important; rail ways and trains in Rail Wars, libraries and books in Toshokan Sensou. Rail Wars includes a good bit of ecchi while Toshokan Sensou has a romantic comedy thing going on, but if you liked the somewhat silly premise in one, you may want to check out the other.

During the industrial revolution, mankind is threatened by the sudden emergence of undead monsters who can only be killed by piercing their heart through an iron plate. Those bitten become one of them. Called the “Kabane,” these monsters exploded in number. The Hinomoto people built fortress stations and barricaded themselves inside. Only steam...

While Rail Wars! certainly lacks in many departments, it is very similiar to Kabaneri no Train Simulator. In Essence, Kabaneri learned to hide its flaws behind beatiful body shots and steaming engines. But to a real expert, a real train conductor, these flaws are clearly apparent.. like the difference between night and day.

In Rail Wars! our main characters are pursuing their dream to become real train staff that support our beloved iron fortresses. While it ultimately fails to introduce good music, good characters and a interesting narrative. It at least understood its purpose of showing the laymen how the worklife of a real train staff is supposed to be. I envy its honesty in trying to give viewers a realistic outlook on their lives but failing along the way to appeal to the masses.

In conclusion, watch Rail Wars! if you want a realistic take on the work of train personnel and Kabaneri of the "Iron Fortress" (jp. for Train) if you prefer a more shounen like potrayal of our godly transporting devices.