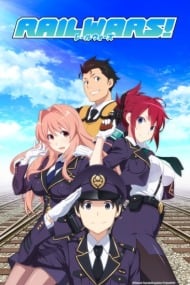 Rail wars! is the kind of T&A show that actually could have two meanings, depending on how you look at it. It's either Tits & Ass or Trains & Ass. However, no matter the perspective it certainly does contain some luscious female anime ass in it. The main story is about four high school students entering the OJT program in order to become future employees of the Japanese National Railways, or JNR. The program has various departments and classes for students to learn about the many jobs available at the JNR. Thus begins the story of Takayama and his companions, who end up getting assigned together to the K-4 security force in the OJT program. Takayama has to be the luckiest dude around. Huge Breasts just seem to gravitate around him. He has had his face "accidentally" planted into every set of boobs in the series. Then again that's not so difficult when you live in a universe where every single female has a well endowed chest. They all must have been given human growth hormone shot straight into their breasts during their pubescent years. If that isn't enough, he gets bombarded with female ass as well...literally. All the well-rounded shiny assed women love to flaunt their bottoms to Takayama and always on "accident," which is only natural, right? In fact, everything seems to be an "accident" in this series when it comes to the T&A. Every time Takayama turns around he inadvertently either has fine female breasts or fine female ass right there for the grabbing, err, taking, uhm, I mean viewing pleasure. Wait, that's still not correct...hmm...oh, the hell with it! The dude is a serious player and he doesn't even know it! If I was Iwaizumi, I'd be kicking him right in the groin for not taking full advantage of his situation, just in a gentleman-like fashion of course. Speaking of Iwaizumi, for the first half of the series he seemed to be non-existent, but in the second half he comes on strong and turns out to be a decent character. He is manly man who can kick some serious bad guy butt! As for both Koumi and Sakurai, they each have shining moments in the series and stand out individually (I'm refering to their characters and not their shiny asses here). Koumi is the more quiet, soft spoken type, where as Sakurai is the tough feministic type who's borderline Tsundere for Takayama. Together with all the secondary characters, the cast is not great, but good. What drags them down the most is their lack of cohesive development. As far as technical merits go, Rail Wars! has some really solid animation. The characters are drawn very well. The overall detail is maintained fairly well in the series, especially when it comes to them and the CG trains, which actually look really good. The art style is easy on the eyes as is the color palette used in the series. The sound is also above average. The train sounds are spot on and the remainder of the sound effects are adequate. I personally liked both the musical aspects of the OP and ED for this show. The final conclusion is this. The plot was sketchy at first with all the Ecchi fan service happening about the screen. However, if you can see past that then you'll discover a series that actually has some stressful, quasi-climactic, and thought-out arcs and storyline that make it an interesting watch. Just take a moment and pretend that this place really exists. If boobies or perfectly-rounded porcelain vase asses are your thing (or trains I suppose), then you have to ask yourself one question... how in the heck can I live here!? It delivers on the front end and the rear as well. ENTERTAINMENT SCORE:  8/10 1️⃣Weighted Average System Score: (15 + 9 + 7 + 15 + 16 = 62/100) Additional Information: Video Format:  Blu-ray (2016) Audio Format:  Japanese DTS-HD Master Audio 2.0 (with English subtitles) Publisher:  Sentai Filmworks Equipment Used:  LG 60UH6550 4K TV, Vizio 5.1 Sound Bar System SB3651-E6, Sony Blu-ray Player BDP-S5200

I had high hopes for this series since it sounded so different compared to what I normally watch. But the fan service (shiny butts, shiny butts everywhere...) is way over the top. I normally enjoy a little fan service, but the episodes have minimal plot and characters that I don't care about. I managed to make it through three episodes before I dropped it from my queue.

Story: Rail Wars? More like Ass Trains, am I right? Now that is a cold opener: A witty, clever joke on how there's loads of fine, firm female fbutts. And some man's butt for the ladies. MC has a nice ass. But the girls, they have fine asses. They even had a 15 second shot of the President lady walking with the camera firmly stuck on her rear. I counted. But seriously, I counted the time after watching it a few times. Best. Episode. Ever. But really, there is a surprising amount of ass considering it's about trains and shit. At first, you might be thinking: "Train Wars Rail Wars? Man, this has to be some real ol' gangsta shit. Motherfuckers be fighting on trains and shit, dropkicking terrorists in the balls, kung fu and all sorts of guns and combat trains, exploding shit, this is gonna be the mega tits!" more or less. But it's actually kinda half that. There are terrorists, kicks, martial arts shit, knees, ass, fine loving shots where the animation clearly went to, derp faces, some real great concepts that probably aren't great to someone sensible and while it's dumb as rocks, it's entertaining if you aren't looking at it with a critical eye, actual taste, quality or some dumb shit like plot or deep characters. Fuck that shit, it's all about ass, trains and high stakes octane action. And let me tell you about the trains: This show knows it's shit about trains. It'll literally explain shit about trains. And MC? He gets a boner from trains. He is a Trainomancer. You learn facts about trains, facts you will forget but it shows dedication to the art, care and tender loving to trains as much as they sculpt those butts. But like, actual, actual plot and that shit? You aren't watching it for that. To sum it up: MC, his harem and Muscles-Kun do shit dealing with bombs, training, trains and something to do with a beach and shrine. It... really isn't heavy on plot. It's actually dumb as fuck but entertaining in it's own, charming way. Nonsensical, unorthodox to the train code and what conductors do because they don't deal with bombs or kidnapping plots or any of that high class risky business but fun. Episodic with continuity? It follows a plot line of some sort but dang man, this gets hilarious in it's stupidity. Not much more I can add because you don't want this for plot at all. You want ass, trains, boobs and some of that fine uncensored train action. And you get it. Animation: Sound: There's music and people talk? But the train sounds, so authentic. Characters: Let me get him out of the way: Muscles-Kun, or Muscles for short, Bro if need be, is a total bro. He's the bro of the show and the only other male with any significant importance to anything. Does he get all the chicks despite being ripped, muscles, charming and a total bro? Hell no! MC hogs all the booty. But Bro, he is a bro and a righteous character. Iida, or Leader-San, I just adore her. And Chief Security of Sexiness, who is damn fine. Excellent ship. Other people... they're MC, Pink and Red. Good people. Red isn't my favorite due to her tsundere treatment of MC because who totally doesn't deserve the flak he gets but she, like all of the other females are easy on the eyes. Because I lack some class and taste, that makes up for her tsuntsun personality and any flaws any other females may have or depth anybody may lack. I'm a terrible judge of characters. Overall: This was a guilty pleasure. It's not good by any means but it's dumb fun. Ludicrous, gets nonsensical, but you know what? There's ass. This is a show with loads of ass shots for men and women. Equal fanservice opportunity here folks, and the other half is trains. Loads of trains. You watch it for the trains and ass, and I totally watched it for the trains at first, until they featured that much ass. If you check the Rail Wars thread, there's plenty of butt shot pics. And other fanservice pics. 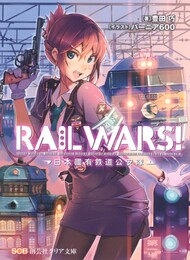 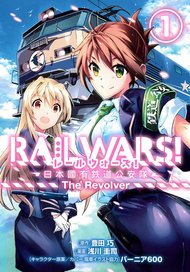 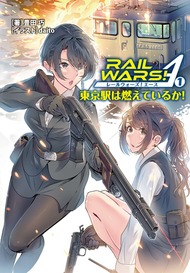