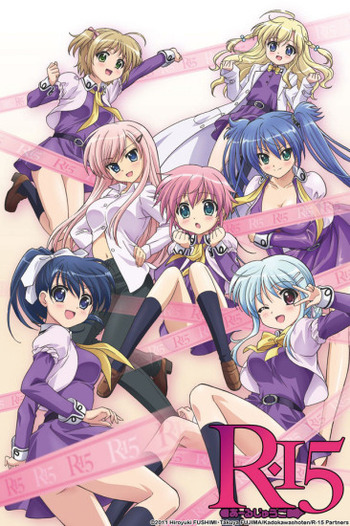 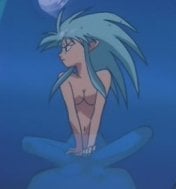 Story - When I got this anime, it was on bakabt as a freeleach, and I had downloaded it as fluff for my seed/leach ratio. However, I got bored and decided to give it a try. From the description I read of the series, it sounded like the plot was a group of students making a porno. Fortunately (or unfortunately, I'm not really sure anymore), it is not. The story revolves around Taketo Akutagawa, a genius adult novel writer, and several other genius students at his school Boobs. Lots and lots of boobs, and panty shots. This is essentially all this anime is about. It begins to have a plot similar to The World God Only Knows, saving his classmates from their inner selves, but you come to realize it's just to set up a love triangle (which is very poorly done). At this point, the story focuses on the relationship between Taketo and the female lead and her love rival. Now the story is still saveable and could have been a 7 or 8 still, had they decided to put any effort into developing the relationships between Taketo and the two girls. Instead, they just add a lot of boobs. The rivalry between the two girls is so weak, it's just plain pathetic. Fine, whatever, there's still the female lead that they can concentrate on, but no. Instead, they give you a halfassed, confusing, and frustrating (Taketo is dumb as hell) love story. It progesses very slowly into...nothing. Literally nothing is solved at the end. After the last episode concluded, I stared at the screen for a good two or three minutes wondering, "Is this it? Was that seriously the end?! What the hell?!" Also, Taketo's constant nosebleeds got very old after the first episode. Perhaps there will be a second season where they can wrap up the hundreds of loose ends from this season, but I doubt it. If they do, they better damn well have as cute an ending theme as this season did. TL;DR: The story sucks ass and has horrible, overused, and confusing plot devices; but if you just want to see boobs, this anime is for you. Animation - Nothing really special here, just your average, run-of-the-mill 2011 graphics. The girls are cute and are well drawn, even in their birthday suits. And thankfully, not all of them have boobs larger than watermelons, though there is an excessive amount of bouncing. Also, the ending credits are cute. Sound - The saving grace of this anime, and I've said it three times now, is the ending credits. They are DAMN fucking cute. I never skipped them. On a different note, all of the sound effects and character voices are well done in this anime. I particularly liked the fortune-teller girl's voice and the scientist girl's lisp. Characters - The characters in R15 are really well done. They had so much potential for expanding on the lead/semi-lead characters' stories. I would have liked to see them take more time into this anime and have actually followed through with some of the story arcs, but alas, I've already covered this in the story review. If only...if only... Overall - I love boobs, don't get me wrong, but this story had WAAAAAY too many boobs and not nearly enough story. Or, in reality, it had just the right amount of boobs, just not enough time and not enough episodes. It's worth a watch, just don't expect much For those of you thinking about watching this series, do yourself a favor: watch this 12 times and then say you've seen it. This explains more, wraps things up better, and has a better story than the actual show

This anime isn't really worth watching.. It pretty boring in it own sense. The main character is unique in its own way. The only thing that may be of some interest to some viewers is probably the artwork because it is a harem and ecchi anime. This anime doesn't have a storyline. There is no hook for you to continue watching. It just an typical anime that takes about how the male protagonist lives his daily life as a talented novel writer. Just that fact may sparkle some interest and the fact that he specializes in writing not romance, drama or action... but in porno! The art is fair, they are drawn a bit childish which states that the ecchi scene are just for fun. They aren't to be taken seriously because the characters stripe voluntarily just for the hell of it. Although i comment nothing but negative here, this particular child-like yet high school students could be used in a different story to utilize the effectiveness. Just that the author is a little off. The Sounds could be better where the Narukara, Fukune only play one tune on her clarinet. I the producers provided more variety then this anime may gain some more points. But in another sense, they did indeed place another music aspect into the anime.. the idol Sonokoe, Utae (yes her name translated into "this voice sing" ) i like her song those.. even though they are just made up and i couldn't find out if it is from an actual song or just made up on the spot. Character wise let's simplify Main male protagonist Akutagawa, Taketo- Porno Novelist. His choice of words can literally get girls to experience a pseudo-orgasm... If he didn't pursue the genre of porno i think he got a real talent. Kuroki, Kurumi: Chief of the schools newspaper.. not much to say, she seems like a very important person with two men in black always with her. She seems like a devil but really she's just bored Meiki, Raika: Talent--Cameraman. she like to take "ugly" photos of people. The ugly side of human are her love for take photos. Narukara, Fukune: talent--Clarinet.. Although that is her talent she only plays one tune throughout the whole story. She is a rather shy character Sonokoe, Utae: Idol .. She a rather cute character i have to say. She sings in like 2 or 3 episode. She actually a nice person.. usually in other animes the so call school's idol have a rather ugly side to their cheerful personality but her character doesn't Overall i wouldn't recommend watching.. unless your looking for a simply, random ecchi anime then enjoy. But ill say this i got through the whole anime thinking that something big is somehow going to wrap things up nicely and don't get me wrong, the producers did wrap the anime with the appropriate ending. What got me through is that for each character, the male character have some unqiue, and intriguing fantasy about each girl.

Based off memory. Also , spoilers. (Mature language possible) Sigh. Welcome to R-15. Another hare series. Where they got the name for this series I have no fucking clue, but meh, let's get rrrrooooiiiigggghhhhtt into the review. R-15 was different in terms of what was going on. The main character was not a virgin retard- he was just a retard. His special "ability" or the thing he could do "well", was writing scripts for pornography. Then he meets this one girl he finds way too innocent and decides not to tell her what he does. Love interest. Throughout the series, it's comedic. That's about it. Animation was meh. Alright. Booooooooooooooooooooooooooooooo sound. Characters were alright. I kinda explained them up there in the second paragraph, but that's about it. You got your tsundere girl. You got the mystery girl. You got science girl. It's some of the same. 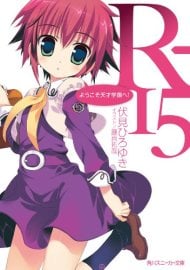 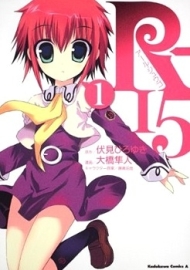 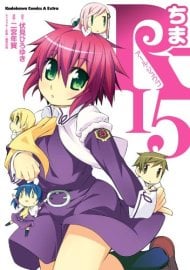