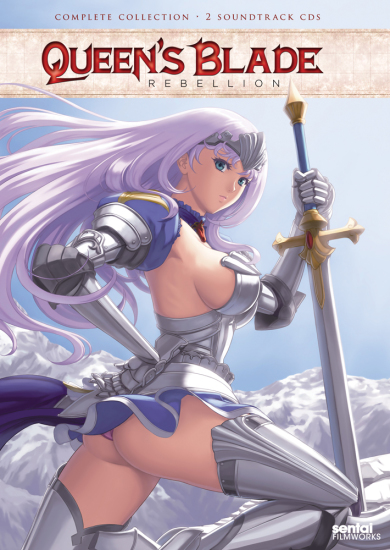 As the rest of the series, Rebellion is boobs with an anime on top. And frankly that is the one reason to watch this show. I had two reasons to watch this show, I won't lie... The other reason was the beautiful soundtrack: Kuiinzubureido Meinteema, which sadly isn't in this season. Moving on.

The story is pretty much straightforward. Nothing exceptional, but it has plot twists, and a little mind bender. It ends rather unexpectedly, but it is kind of an anti-climax.

The animation however is nice. Pretty details (in a non-pervy way), and a nice mixture of coloring. Backgrounds are not too flashy and not too shy. But it's very nicely animated in the parts it's supposed to (if you know what I mean.jpg). If a person (not me) was to compare breast animation on anime shows, Queen's Blade in general will get very high on the list.

The sound is good. Not superb, not poor. Just good. Voice actors does their job, but what lifts the "sound" part of this series is the music. As previously mentioned, this season is missing one of the most beautiful soundtracks from anime I have heard, though I am a sucker for classical music. The other soundtracks are also nice though, but without the one I personally think is best, it somehow felt like something was missing, as it is the only other thing except from boobies I associate with this series.

Characters. They are kind of dissapointing. There isn't much to say really, except from that there is a new set of characters and you get the basic storyline from them.

Overall. Somehow I feel like this review is a bit longer than needed, so I'm going to sum it all up as short as possible. Don't hate it because it shows a ridiculous amount of breasts whenever possible. It's what it's supposed to do. If you're watching because of fanservice, your in for a treat, anything else, and your going to have to look elsewhere.

Honestly, I don't like Queen's Blade: Rebellion. It was an unecessary addition to the story and hardly contributed anything. Leina's been pretty much completely erased from the story with the exception of like one cameo. So we have a new protagonist named Annolette, who people think is a guy, but is actually a girl.

Things went south pretty quickly with a butt ton of characters being introduced and almost none of them being developed properly. The only characters who hold any importance from the first series are Elina and Ymir. Other than that everyone else has pretty much vanished with the exception of a few cameos. I mean Annolette is likable and all, but that's just it. She's the ONLY likable character (not to mention the only fitting voice in the dub). The others are pretty much like lame doppelgangers of previous queen's blade characters (Wheat is Nanael, Luna Luna is a watered down version Echidna, those two dine and dash girls are Tomoe and Shizuka and so on).

As for the animation, it's a HUGE step down from the previous series, with everything looking all one color and rather garish. I mean I'm not a harsh judge on animation, but damn.

The dub is horrendous, but the original wasn't really very good to begin with.

Lastly the story. What story? The whole thing is 80% filler and 20% actual progress.

So in all, unless you're a huge fan of Queen's Blade (and I mean one who can pardon retcons and bad logic) don't bother with this one. It crumples it's potential and wastes most of it's time on unlikable characters and static storytelling.

Warning in this review I may spoil the complete ending of the anime. And maybe the rest of the anime to.

Plot: The plot was different than the first 3 seasons of Queen's Blade (yes I'm counting "Utsukushiki Toushi-tachi" as a season) the plot was focused on something new.

The "Queen's Blade" didn't have so much to do with it.

It wasn't about Reina anymore, but the plot was now focused on Anne-Lotte, the only member left of House Kreuze.

Anne-Lotte has a high sense of justice and the only thing she wants is to defeat the Thunder Queen and to bring peace to the Main lands again. But this won't go without danger.
On her way she faces Ghote Pirates, Vibrating Valkarys, dancers and summoners.

But will Anne-Lotte be able to free the Main lands from the terror of Claudette or is Claudette not responsible for the terror at all and is there something else going on?

The plot was okey. Not what most Queen's Blade fans would expect because it was the same as Season 1, The Wandering Warrior.

Music: The music was great. It was just like the seasons before, lovely and nice classic OST's.

And at some points you could here some dub I think. (not a great fan of dub so I'm Talking bull I guess) " The main theme" was great, just like all OST's from this anime.It kept the excitement in the anime and it made it pretty good looking. It was truly amazing.

Music was still is Great really great, it was truly amazing and that also counts for the "opening" .

And because of it all.

Development: The develop of Queen's Blade Rebellion was dramatic it sucked at some points.

But it also had good points like the most endings.

*looks up with hate in her eyes*
Anne-Lotte: So, we finally meet…..
*looks straight in Claudette’s eyes*
Anne-Lotte: LIGHTNING QUEEN, CLAUDETTE!!!
*Dramatic fade out (with Main theme fading on the BG) /better cliff-hanger!*

The development was bad.

I felt Raped, like a child in the Roman-Catholic church in Europa in the year 1946.

They raped it at the end! The scene where Maria arrives!

You hear the main theme of Queen’s Blade Original, so you expect a Master sword fight between Reina and Claudette right???
What do you get!!! Oww she fell asleep.
Claudette: *Turns around* Will finish this another day….

Develop 3 out of 10 sorry but I wanted a nice sword fight between Claudette and Maria.

Characters: Well in one thing hobby is the best and that is making there Beautiful warriors.

But (there is always a BUT) the characters where somewhat copies of the previous serie.

They also had the good voice actors. The voices were right and well done.

Characters will get a 8 out of 10. Job well done Hobby!

Over all Queen's Blade Rebellion scores a 6 out of 10.

i cant bloody find the episodes