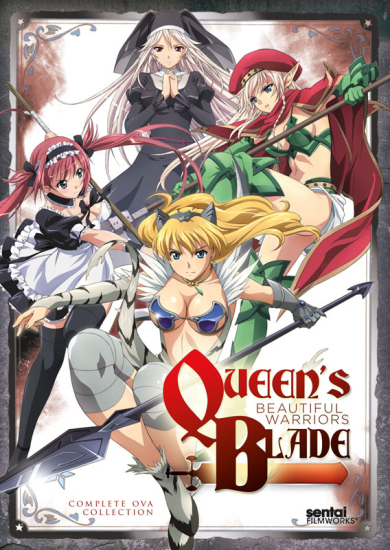 A promotional video for Hagure Yuusha no Estetica featuring a battle against Queen's Blade: Rebellion characters.

The story centers around Tekuni Depagaa, a girl who embarks on a journey to train and become a fighting master known as a "wazabito."

Asuka and her friends may look like any other girls at Hanzo Academy, but they're secretly studying the ancient art of Ninjutsu! While other students do their homework, Asuka and the gang push their beautiful bodies to the breaking point in pursuit of their perfect form. Life is one sexy sparring session after another until a deviously demented rival clan of evil ninjas ambushes the Hanzo hotties - and steals their sacred ninja scroll. Faced with their toughest - and most well-rounded - enemies ever, Asuka and her fellow deadly divas will have to go further than they've ever gone before to prove they've mastered the art of full frontal combat!

Though he spends the majority of his time wandering the vast palace or completing dull administrative duties, Hakuoro still occasionally finds time to kick back and enjoy time with his friends. While stealing food with Oboro, Hakuoro finds himself in trouble with an upset stomach and only one place to go – but who of the duo will go first? Meanwhile, Kamyu continues causing headaches for Munto after slipping out unannounced, but a dip in the bath with the girls will help calm the situation. But the mischief doesn’t end there! After being entrusted with one of Touka’s beloved dolls, Hakuoro’s over-enthusiasm leads to its beheading. Is there time to repair it before she returns, or is it time to pass the blame to someone else?