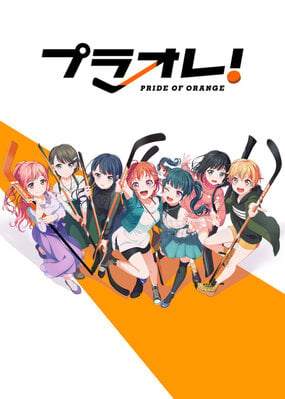 The Dream Monkeys is an ice hockey team based out of Nikko city in Tochigi. The team holds a hands-on instructional session in order to find new promising players amongst local junior high school students. Manaka is coerced into going by her younger sister Ayaka and childhood friends Kaoruko and Mami. After the intro session, the girls are enthralled with ice hockey and are eventually invited on to the team.

Some anime defy genres, and they usually end up being either very beloved or hated. PuraOre however defies them in a Frankenstein's monster kind of way, being a mess of different elements that barely achieves the barebones level of acceptable cohesiveness and results into a weird but ultimately forgettable and generic show. Episode one starts off with a high octane hockey match with wonderful animations and dynamic direction. Then we get an idol performance by the main cast all singing and dancing showing off their outfits and VAs singing skills in what amounts to an average but well made scene as far as your average idol anime goes. And then we get 5 minutes of the girls chatting while they drink tea and knit, discussing neither hockey nor music. If you watch that much and don’t mind how unconnected they are, then you have a chance at enjoying the rest of the show. If not, stay away immediately. Story & CharactersThe plot line belongs to a sports show, with the cast getting into a sport, learning the basics, improving and then ending on a final match with some rivals. Nothing innovative but after all it’s all about execution. The problem starts when the characters (read: stereotypes)  and their means of progression belong in a Slice of Life show, which means the girls get self conscious about not doing too well, not communicating enough with the team or which taste of ice cream to buy.  The dissonance wouldn’t be too bad if not for the fact that some episodes don’t feature any hockey and are instead just them spending a day at the beach. Moments dedicated to teamwork are of course needed but that’s all this show does to show us how they improve. The catchphrase of the show is not "Connecting the puck with the bond of our hearts!” for nothing. I have nothing to even say about the idol aspect of the show because it literally doesn’t matter to the rest of the show. The girls sing a few times after a match. No one then comments on it. It doesn’t matter. The songs are okay. VisualsAs mentioned previously the animations during the matches are surprisingly good and energetic, making it very easy to follow along what’s happening and get hyped when they are about to score. But the same cannot be said for the majority of the scene. Flat backgrounds, plenty of still shots, entire scenes of barely anything more than lip flaps. There’s nothing interesting going on during any of the SoL conversations unfortunately. To note the character designs however, which while far from original are still all pleasing and look great mostly thanks to the amazing use of vibrant highly saturated colors. as expected of a gacha game shill anime If you happen to like SoL, sports and perhaps even idols then sure give this a shot for the simple coincidence but all the elements are average on their own, and don’t raise each other up in any way.

It’s easy to dismiss Pride of Orange as forgettable fluff (which it is, make no mistake about that), but there’s still something about it that’s charming and even cute. Try not to be too serious about it and you’ll be rewarded with a nice, inoffensive way to burn a couple of hours. There’s nothing about this that grabs you immediately, but let it sink in some and you’ll soon find yourself cheering for the girls to win it all. Pride of Orange goes through its checklist of sports anime tropes so meticulously, so the minute it tries to do something a little extra – like that weird idol group gimmick – it becomes a nuisance that makes you wonder why they had to put it in at all. Almost as if the show was a little insecure about its cute girls concept, so it goes and forces the cuteness on you so you don’t forget what you're watching. Still, as far as all-girls sports anime go, Pride of Orange isn’t actually half-bad. At the same time, that also means it’s only half-good, too. It focuses more on the girls’ friendship than on them playing ice hockey, so your characters aren’t strong enough to carry the story on their own. Instead, they end up relying on their dynamics with everyone else to make you keep watching. Your characters have some depth to them to make them more than just empty stereotypes, but once they're all thrown in together, they become generic and so terribly cliché.  The most you can say for Pride of Orange is that it really does make a genuine attempt to be halfway watchable for a general audience. With it, ice hockey becomes accessible and fun, but maybe that's only as long as you're able to recruit your other friends to join you so you can all take over the team together. Teamwork makes the dream work, but like the series shows us, it takes a little more than just that to really make the message stick. It manages to get the job done by making you feel good in the moment, but don't be surprised if you forget all about it a couple of weeks later.