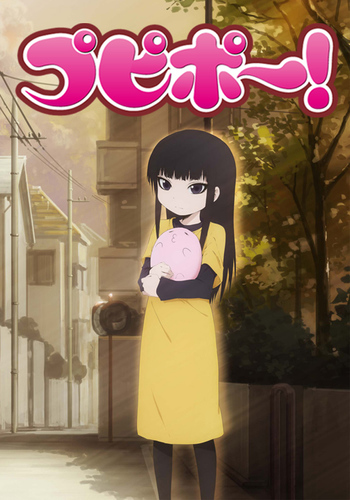 Pupipo! an anime about a girl, Himeji Wakaba, with the ability to see ghosts and a little pink ball character (Pupipo), that I had named Kirby for no particular reason.

As short form series go, this one was actually pretty good. The story it had would have worked as a show of regular length. Most of the series is quite easy going, with some of the overarching story sprinkled in here and there, mostly when regarding to Kirby, the titular character. The final few episodes is where the story kicks into top gear which can be a turn off for those that just wanted a laid back comedy, however I found that even in these last few episodes the show still manged to be just as amusing as before.

A slight negative is the fact that the anime ends a little unceremoniously, the events leading up to it promised a little more.

Pupipo's cast was pretty good, the protagonist was more on the serious side however the rest of the characters in the show have some sort of comedic value to them, there was even a character that at a glance seemed to be one of the stoic, male characters with little emotion or personality but there was actually far more to them than that.

It had a nice art style, well animated. Nothing to complain about here, the technical side of things worked for the show.

In conclusion, a solid short form series only let down by its rather lacklustre ending. I could have easily watched this had it been a full series. Its pacing is a little uneven, with the plot mostly taking action nearer the end; however this was not too big a problem for me.