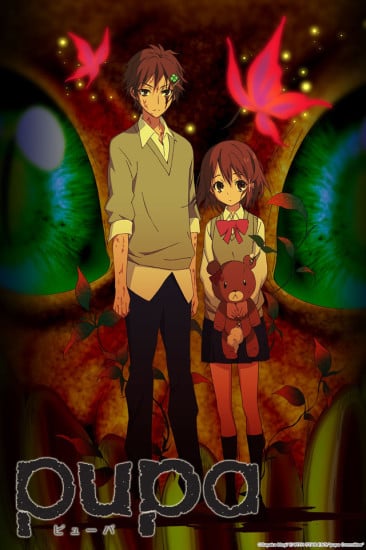 Exhibit #1 on why horror genre and short episode format can't mix if you try to keep a fluid plotline. I'm sorry, Studio Deen, but this... this was awful. Stick to making countries into cute boys, mmk?

Story: A brother and sister get infected, she turns cannibal, he becomes the feast. I mean, that premise sounds really interesting. Unfortunately, it's done in such a way that it's bland, uninteresting, and mildly irritating. For one, the brother-sister dynamic is near incestuous, but not enough to warrant a tag. There's a creepy scientist lady who is given a storyline that ends up going nowhere. And for the most part, it's just repeated scenes of the sister eating while chanting "brother" over... and over... and over. Bleh

Animation: Here's one of the weirdest things about this anime. You'd expect sharp, dark lines from horror. Or maybe contrasting colors? Something jarring to put you on edge? No. This anime goes for muted lines and soft colors. It's almost dream-like in it's animation style most of the time. Which is rather odd given the genre it is trying to portray. 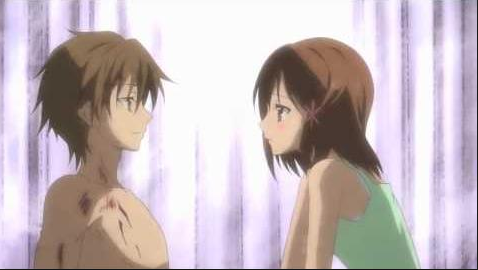 Sound: If I have to hear any more poorly done bite sounds and her chanting "brother" one more time...

Character: She's hungry, he's self-sacrficing. Seriously. They have the emotional depth of a kiddie pool. I would forgive the poor animation, the poor plotline, if they made this an emotional trauma piece about how she doesn't want to see her brother as food. But no, there is none of this. Just nothing.

Should you watch this? No.

This anime brought to you by DAMC.

This anime HAD a great potential but lacked a story and seems to go no where...

If u can describe an anime, tell us everything about it in 5 sentences or less that means IT A HORRIBLE ANIME

Anime-planet described it as: "When Utsutsu and Yume were young, they were physically and emotionally abused by their sadistic father; and now that they’re older, Utsutsu swears above all else that he’ll protect his little sister at any cost. So when the girl is infected with the mysterious Pupa virus, causing her to turn into a terrifying monster that eats anything around her, the boy does the only thing he can: he offers his sister his body and flesh to consume. He won’t die, for Utsutsu was also infected with the virus, giving his body the superhuman ability to regenerate from any wound, and making himself the the perfect food source for his beloved sibling. Though nefarious researchers and doctors are studying their every move, Utsutsu will do whatever he can to keep the pupa inside of his sister from emerging and killing them all."

Well guest what I can TELL you the anime in few less words...

Main characters Utsutsu and Yume has a child abusive father (doesn't matter to the story). Their mother had Yume, younger sister, but she caught a unexplainable virus called Pupa. Yume's virus makes her have monster like power, grow tentacles and regen body/organ in extreme speed; however, she will have to consume human. She was saved because her brother later on also caught the virus, but for him he only get the power to regen organs/skin/body part(the sister's food infinite food source), together they live on, WITHOUT A FREAKING STORY OR PLOT OR GOAL OR POINT OR ENDING.

This anime has no point or ending

What are they going to do as monsters?

Are they just going to survive, and Yume will just eat her brother to live on?

Will government try to kill them?

Will they find a cure for Pupa?

Why does Yume's monster form looks like a pink godzilla from the 1950s?

Is this an anime?

The synopsis makes for a seemingly interesting anime, but the actual medium serves to only disappoint.

Stories with strong sibling bond, especially with older sibling and younger sibling, are my weakness.  I'm an older sister for four younger siblings, and it honestly pulls at my heartstrings when I come across stories with young siblings/children.  While I tend to not even bat my eyes toward incest in some anime, I was annoyed by the implied fetish in the show.  I honestly wanted to see some wholesome sibling love.  Luckily (but also unfortunately for the quality of the story) each episode is very brief.

I would really love it if the creators of Future Diary, Deadman Wonderland, or Tokyo Ghoul would do a reboot of this premise.  Give it an actual story and I'm sure this could be one of the next series with an annoyingly large, obnoxious fandom.

Oh God… Why did I ever think this was a good idea? I have to admit, the premise of this show sounded vaguely interesting. A little girl, turned monster that has to eat people to survive? And her bro sacrifices himself to that purpose? Yeah, that could work. Oh how wrong I was. This sad, little excuse for a ‘horror‘ anime is a poorly disguised fetish show full of implied and actual (well, technically) incest, horrible pacing and unexplained scenes that you might as well look at it as a series of unconnected events. I can’t even tell you what the story’s about besides monster girl eats her brother and he moans a lot… It sets up for so many things, but none of it actually matters. It’s basically all about the unhealthy, incestuous relationship between Onii-chan Utsusu and his little sister Yume.

The animation in general looked kind of lazy and sketchy. I liked it for the backgrounds though, for the characters themselves… not so much. The censorship was ridiculous, so if you ever decide to watch this (and may the anime gods stand by you if you do), please get the uncensored version. Even then the gore is nothing special.

You know what. I think if you start to look at it as a comedy, you’d get much more satisfaction from it. There are points in the story where some actions are portrayed by cute little teddy bears. These were fucking hilarious and probably the best part about this anime. Especially the beginning of the second episode. That was some pure comedy gold.

All in all, it’s just around 37 minutes if you put all the episodes together. If you like to torture yourself, you should totally watch this.

This anime has a lot of speculation. And it's meaningful.

It's not supposed to be the greatest. If you don't like 5 minutes of guessing. Don't watch it. You'll get annoyed.

The story is about a brother and sister working together to live normal lives. Due to a virus, called Pupa, they can't.

The sister eats flesh, if not she'll become a monster. Her brother regenerates his own flesh when hit/shot/eaten.