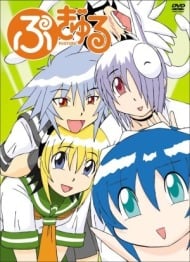 StoryI think it should be immediately said that Pugyuru has no plot. At all. The entire "story" consists of pure randomness, revolving around small happenings in the life of a girl whose name starts with "Ma" (you never find out the rest). The episodes are also only about 3 minutes long, making the entire series taking up a mere 1.5 normal episodes worth of viewing material. At least 4 episodes revolve around meeting new characters, such as the squid, the bully, and the snow spirit. There are also quite a few episodes which delve into trying to figure out exactly what Cheko-chan really is! There's no fancy ending, no revelations, and certainly no plot you could attempt to come up with, but it still ended up being hilarious and fantastic. Pugyuru, ironically (unless there's something I'm missing) was shown on the "Kids Zone" network/channel. However, quite a bit of the material was either quite ecchi, or very adult in nature. I kept thinking "Wtf, this is being shown to children?!" The ecchiness centers around things like huge oversized breasts that have things shoved between them, not sex or anything related to that. And the comedy, oh the comedy. Seriously folks, it makes no sense, and it's not really supposed to. While it isn't completely in the realm of abstract, it definitely is something to watch for a mindless comedy session, not for a deep understanding. Simple things such as walking in the park turn into a crazy encounter with two goons with squirt guns. Food comes out of Cheko's head. All of her friends are edible. Need I say more? The story was hilarious, and really is great for those who want spastic randomness. Di Gi Charat in a more adult fashion, basically. AnimationThe animation of Pugyuru definitely wasn't anything slick or special, but it wasn't supposed to be. Fairly crude looking characters with simple shading and facial expressions dominated the series, with bright vibrant colors to be used everywhere. The main thing to point out is that since Pugyuru is completely random, it needs equally as spastic animation, and it definitely delivers on this. Comedic scenes are shown in a variety of ways, from strange scene transitions to close ups where they aren't needed, or simple animation and still scenes to show a hilarious moment. The colors were often used very randomly as well to help with the comedy. No special effects such as CG were used. During the especially crazy scenes, sometimes the colors changed palettes completely (moving to reds/oranges, for example) to get the point across. So, when looking at the score I gave for the visuals, keep in mind that in this case, it is mostly based on how appropriate I felt the visuals were for the lack of story and general randomness. If I was judging on just animation quality, the score would be much lower. Luckily, in this case, I felt it didn't matter much, due to how well it fit!SoundThere really wasn't much music at all, and can you blame that on a series with 3 minutes per episode? The ending and opening was the same song, though the ending did have lyrics. The beat reminds me of that song "Popcorn"... a very upbeat synthesized beeping type noise, which fit the randomness PERFECTLY. There wasn't much use for music in Pugyuru, and it pulled off the one main song it used nicely. Voice actors made the series that much more funny, with childlike and clueless voices that make you smile. CharactersSince there was barely any substance in this show, my score is primarily based on the random and mixed cast that was introduced. Each main character had an equally as funny background or quirk, and most of them also happened to be edible! There really was no rhyme or reason to anything in the show, let alone the characters, but all of the cast still managed to be incredibly entertaining, and that's all that mattered. OverallPugyuru is an extremely entertaining watch, with no plot to speak of, hilarious characters, random situations, and more spastic scenes than you can imagine. For those who love things that make no sense and are mindless fun, you'd surely enjoy this. For those that want a plot or something other than the above, why bother? I've seen a lot of negative comments on Pugyuru, because of the mindless aspect.. but hey, if you are in the mood for that, this is definitely recommended.

StoryThe setup for this show is ridiculously simple. A girl (whose name we never learn aside from it starting with "Ma") has her parents suddenly leave on a romantic cruise, leaving her alone in the house. To help her take care of the house, they have hired a maid--a tiny girl named Cheko. Come to think of it, she’s actually not very much a girl at all... More like a somewhat body-shaped mass with a girl’s head on it. This leads to 13 quick 3-minute episodes about the misadventures of Cheko, "Ma," and several of Cheko’s weird friends that are introduced over the course of the show. The humor is of the "crazy mayhem" variety, which has always been my favorite kind of anime humor, exemplified in shows like Excel Saga, Puni Puni Poemi, Ippatsu Kikimusume, Abenobashi and occasionally (but to best effect, IMO) in Azumanga Daioh. In fact, that’s what this show reminded me of the mostâ€”the hilarious "dream" sequences in Azumanga Daioh. There really is no "plot," and the only recurring note in the show are Ma’s attempts to discover what in the world Cheko actually IS. The general plotlessness would likely get old after any extended period, but in a show that goes by this quickly, I found that it never lost its charm. Cheko appears to be equal parts robot, alien and some random ingredient that is constantly changing, always leaving you wondering if there’s ANY rhyme or reason to her at all. The sequences are very effective as comic fodder despite the low-budget animation and even the less hilarious episodes make you smile, if only at just the "WTF factor." Many episodes are flat out hilarious, and in general, I found Pugyuru to be highly entertainingAnimationWell, no bones about it, the animation quality of this show is pretty awful. There is little (if any) detail, character designs are highly crude, and there is just nothing about it overall that suggests anything but the most meager of budgets. Let me be equally clear, however, that this doesn’t really hurt the show very much. In some ways, the low budget visuals add to the off-the-wall feel of the show. But still, this is likely the lowest budget animation I’ve ever seen in an anime. If animation quality is highly important to you, this show is likely not for you.SoundThe OP and ED are simple and cute, the ED is great in particular, with Cheko chirping "Pugyu! Pugyururu!" at you in an impossibly cheery voice and a short song about a maid that changes episode to episode. The voice acting is also quite solid, and effectively conveys the characters’ unusual personalities. Ma’s voice in particular is great at expressing her stunned disbelief at the craziness going on around her.CharactersThere is little time to develop the characters, and they all remain quite one-dimensional, but they are also all hilarious and memorable. From Mizore the huge-breasted yuki-onna (a mythological â€˜ice princess’ literally made out of snow) to Kanato the hooligan schoolgirl with a rather inappropriate obsession with some objects of destruction to Nachiko, a squid that literally wears a human head and dreams of being a great maid, the characters seem out of a fantasy land all its own, and that uniqueness adds a lot to a bite-sized show like this.OverallPugyuru clocks in at about 40 minutes totalâ€”not even the length of two â€˜normal’ length episodesâ€”and as such, its aims cant help but be different from most animes. Rather than make a likely futile attempt at a plot or any amount of character development, this show accepts the limitations of its length and budget cheerfully. It serves up a barrage of quick, off-the-wall skits that will certainly weird you out and almost as certainly make you laugh, and while it likely won’t stay in your mind for too long after you watch it, fans of random, chaotic comedy who don’t really mind low budget animation are in for a pleasant surprise.

OMG! I sorta likd the first episodes, but around episode 5 I started to regret even wanting to watch this. It's just so weird and random it even isn't fun anymore. My brain stopped workig because of this weird random anime that doesn't even seem to have a real story!!! 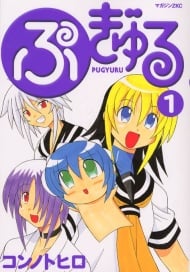