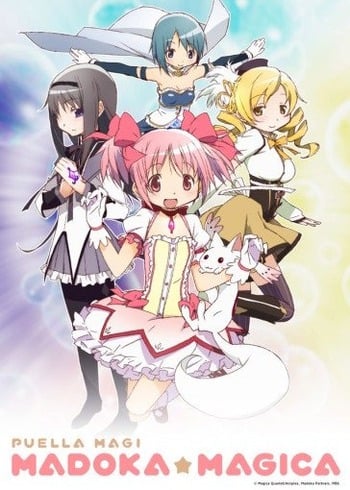 I can't really say much more without spoiling Madoka Magica, but they have similar ideas. (Think about Homura and Seokjin)

This is a story about high school boys who seem to have become magical girls.

Yuuna Yuuki is an ordinary second-year middle school student. She gets up in the morning, gets ready for school, goes to classes, participates in club activities, and has fun with her friends. But there is one extraordinary thing about Yuki -- she belongs to the “Brave Hero Club.” What does the Brave Hero Club do? Who is the mysterious being called “Vertex?” Yuuki Yuuna and her friends’ story takes place in Year 300, Era of the Gods.

All Kii Kogami wants is to have a normal, boring life. But when a horde of homicidal magical girls descends and kills almost all of his classmates, turning them into undead monsters, Kii's dreams vanish in a wave of gore and chaos. Alongside other survivors like the busty Yoruka, childhood friend Tsukune and would-be medical student Ren, can Kii manage to escape a horrifying death one day at a time, while discovering the truth about this invading force?

Akari has always known two things: she’s a skilled fortune teller, and she has an uncanny knack for growing huge, healthy plants. But after experiencing a traumatic tragedy the girl soon discovers the true horror of the world: there exist evil spirits known as Daemonia that infect people’s hearts and grant their hosts wishes in exchange for a contract. After the wish is fulfilled, the human is turned into a murderous monster, and only Sephiro Fiore, a group of girls who wield the powers of the Elemental Tarot, can put a stop to them. As the bearer of the Sun card, Akari must join Sephiro Fiore and help take down those possessed by Daemonia, no matter the cost.

When the Earth is threatened by the sudden appearance of undead creatures, a group of young women blessed with powers from a mysterious source rose to defeat them. Now, after three years of apparent peace, the same malevolent creatures have resurfaced. Five magical girls are once again conscripted to war as the Magical Girl Special-Ops force, to defend mankind from an unholy nemesis.