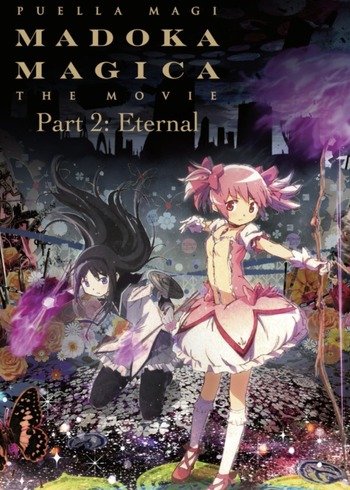 What I Liked: Much the same as the first movie, and by extension the series. Character animation has improved ever so slightly.

What I Didn't: Why the random musical interlude?

Final Verdict: The second part of this movie-length recap adapts the final 4 episodes with perfect pace and effective storytelling while adding in some slight but noticable visual improvements here and there. All the voice actresses manage to one-up their previous performances, the soundtrack is great and the ending is still as heart-wrenching as it was on TV.

This movie... So many feels.

Again, like with the first movie, this one follows so close to the original anime that I'm not going to spend too much time on this review.

The animation is great, and I loved seeing Homura's story a second time. It's so heartbreaking, but it's made me love her so much for it.

I was a little more prepared for the ending this time, so while it was still very emotional, it didn't depress me quite as much as it did when watching the anime. Also, I think it helps knowing that there's a third movie that continues the story, so hopefullly that has a better overall ending.

Overall, it left just as much of an emotional impact as the anime did, and while I still hate that Makoda's sacrifice felt almost meaningless, it was nice to be reminded that she had no regrets.

Spoiler Alert (not really, but proceed with caution)

When i watched this i honestly had no idea what was going on, it was very confusing to get your head around all these new concepts, i'm not saying the story is bad though in fact i think  it was quite interesting once, you know... you understand whats happening but yeah i thought they did a good job with this anime i felt like i didn't know some of the characters though so when they died  i felt nothing so i wish i could get to know some of them a bit more.

Eternal is the second of two recap movies which present a slightly different edit of the story of the original series.  This movie covers episodes nine through twelve.  Because I have already reviewed the original series Here, and Beginnings Here, I will only touch on the differences in this review.  If you have already watched Beginnings, then you know how beautiful these recap movies are.  Actually, there isn’t much to say really.  If you watched Beginnings, then you know what to expect.  And if you haven’t seen Beginnings, why the heck would you start with this movie?  Go watch Beginnings!

It has been said many times that you can either watch the series, or the two recap movies, and you will pretty much get the same experience, with a similar overall running time.  As for Beginnings, I disagree.  You get a significant difference from the Original Series story with the Beginnings.  However, Eternal seems to be practically identical in story to the original, and the only differences are in the supremely upgraded visuals.

Let’s break it down:

Animation:  9.5  Just like in Beginnings, this animation is beautiful.  It’s worth a watch even if you have already seen the original series.  Also, as I mentioned in my review of Beginnings, they have made a solid effort to de-sexualize the girls, removing all nudity, even in scenes such as the final meeting between Homura and Madoka after the latter makes her wish.  In the original series this scene was awkward, with both girls completely nude, but with enough sparkles and glowing magical light effects to hide the details.  In this movie, however, they are wearing brilliantly glowing white dresses in that scene.  Kyoko’s and Homura’s transformation scenes both featured brief nudity in the original, but have been completely redone for the movie, significantly upgrading the effects and doing away with the nudity.  It is simultaneously more tasteful, and more spectacular.

Sound:  10 Just like Beginnings, outstanding.  Music is perhaps the best I have heard in anime.  Voices, both English and Japanese deliver outstanding performances and you really believe the emotions.

Story:  9.0  I didn’t notice any significant deviations from the original series, which is both a strength and a weakness.  I like that they were loyal to the original material, but a little something new to make watching the movie more worth the ticket price would have been appreciated.

Characters:  8.0  We’re down to just Kyoko, Madoka, and my favorite, Homura.  All three really develop here, with Kyoko getting a heart, Madoka getting courage… and Homura gets Kansas?  Actually, Homura gets screwed.  As I like to point out, she is the only magical girl whose wish is never granted.  In the end, (slight spoiler) Madoka saves herself, and Homura has been breaking herself for nothing.(end spoiler)  But of course, that’s why we have a third movie, so Homura can have her just desserts.

Overall: 9.5.  My recommendation:  This is so faithful to the original, but with such incredibly upgraded visuals, that you should probably just watch the first eight episodes of the series, and then switch right to this movie.  Don’t even bother with episodes 9 thru 12, just watch this instead!

Mahou Shoujo Madoka Magica Movie 2: Eien no Monogatari continues the first movie and completes the story of the series. This time, instead of eight chapters compressed into two hours, we have four chapters expanded into an hour and forty-something minutes. This works wonderfully, and making the pace of the anime a good continuation for the first movie, and as such fixes what little pacing issues were in the original series.

I'm sure you can enjoy this movie without watching the first one, but really, you shouldn't. The movie is split into three parts (and for all people complaining about the "random" video clip, it is basically the opening theme to the third part). The first part is the follow up to the first movie, and the inevitably cruel revelation striking in the gut of the characters. The second is about this movie's protagonist's struggle. How she became from timid and sickly girl into a ruthless warrior. We see how she was exposed to the horrors the girls from the first film were, but only this time, all the horrors were explained through her best friend suffering them over, and over, and over. That bit ends where the first movie begins, more or less. The last part carries on from where the first part ended.

It's a clever structure, as there is a clear protagonist. Unfortunately, this is a story about how the protagonist, who willfully plunges herself into a recurring hell, until she finally breaks. Oh, it resolves itself, that happens. But rarely does a protagonist have to go through that kind of suffering unless the movie involves outright torture scenes. It ends well, kinda. In this story, the magical girl is finally deconstructed down to its roots. There is no beginning nor end to their struggle, and it will always end badly for each girl. There is no respite, no justice, no logic, and it ends when all hope is lost. Still, the ending (while bittersweet) resolves this, to a point.

As a film, the structure is very carefully crafted according to a classic formula: a hero's beginning, they struggle, they fight, and they learn to overcome obstacles. Then they are faced with the impossible task, and somehow manage when all is lost. Except for that last part. That relies on the first film, removing the stand alone value of the script.

From a cinematic perspective, the writing is how you classically write a sequel, only with a twist to it. The main characters in the cast are narrowed down to two and a half, rather than expanded. This choice adds coherency which is much needed due to the prominence of time travel in Mahou Shoujo Madoka Magica Movie 2: Eien no Monogatari's story. The plot finally explains the blanks left from the first film, and get to a point where all of them (except a big one, which I'm guessing is the point of the third movie) get resolved.

The story itself is near flawless. The only point against it is that for a few crucial things it relies too much on the first film. Without that, it both conforms to certain rules, and breaks certain structures that are the norm with simpler movies. This is well executed. It will make you think, not only enjoy it as it happens. Of course, "enjoy" is an odd word unless you happen to enjoy teen girls going through intense psychological damage. Yet the plot is compelling, and actually quite clever by building upon things we know well (magical girls, time travel, deals with the devil, etc) and twisting them around.

A significant shrink in the focus of the film allows both development of two characters far more than should be rightfully expected, while still maintaining a steady rhythm with the plot. This film is not about the story of Madoka, but of her best friend. Of course, watching the first film you wouldn't know who that ends up being. Time travel and character development are weird that way. If only for the friend's development, which I have to say is fantastically well done, the character section for this film deserves a rightful rank in the top tier.

Well, how can I say this without gushing? Best anime movie script, if you include the first movie. Only the need to watch the first film prior takes a bit off from what is otherwise the closest to flawless in anime history without Miyazaki involved. The writing is just that good in Mahou Shoujo Madoka Magica Movie 2: Eien no Monogatari.

Do not gush. Do not gush. Do not gush. WONDERFUL, AMAZING, MAGNIFICENT. Damn, I was trying to avoid this. Whatever flaws in the animation exist, they are tiny. The sound is top tier stuff even by cinematic standards. They work in conjunction to make Mahou Shoujo Madoka Magica Movie 2: Eien no Monogatari extremely powerful. The revamp to the weaker points of the series takes an already strong basis and pushes it a level higher.

I won't sugar coat anything in the flaws: some backgrounds are too static. In some scenes, characters aren't moving enough. Perhaps more effects of wind on clothing would make it even better. That's it. Artistically audacious, innovative, and extremely clever in the use of every trick in the director's handbook; that's the animation of Mahou Shoujo Madoka Magica Movie 2: Eien no Monogatari. The work added to fix the flaws of the series has worked brilliantly. This is about as near perfection in this style of animation as has ever been done.

Now the sound is something I can add that for the first time, reaches the top tier of audio. Intelligent use of positioning on both effects and voices, a soundtrack that fits well, clever use of silences, and voice acting that is spot on to what the writing tries to achieve. Also, the antagonist's voice with its cheery disregard for the protagonist just shines. This perhaps isn't as agressive as I'd like with the use of filtering on voices, and a more experimental soundtrack could have pushed this into the realms of brilliance (and not just excellence), but needless to say, these in no way make it hard to enjoy.

Wow. Just wow. That is how you can describe the artwork. The facial expressions and body language match the voice acting and plot. The world of Mahou Shoujo Madoka Magica Movie 2: Eien no Monogatari is dark, yet rich... and the artwork reflects that perfectly. There is ample use of symbolism in both sight and sound to give an artistic flair necessary to push this movie to truly the cream of the artistic crop.