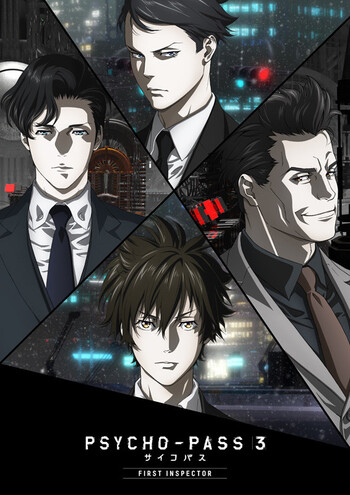 Okinawa, summer of 2112 before Tsunemori Akane is assigned to Division 1 of the Public Safety Bureau Criminal Investigation Department. Sugou Teppei, belonging to the 15th unit of the joint task force of the National Defense Forces, is taking part to a military operation as an excellent pilot. Three months later, a case where an unmanned armed drone attacks Tokyo and the Ministry of Defense begins. In order to investigate the case, Masaoka Tomomi, enforcer at the Criminal Investigation Department’s Division 1 who went to the National Defense military base, comes near the truth behind the case with Sugou.

Winter of 2117. A vehicle out of control crashes in front of the Public Safety Bureau’s building. The driver is Yasaka Izumi, a psychological counselor at the isolation facility for latent criminals in Aomori prefecture, the Sanctuary. However, Yasaka immediate repatriation is decided right before her interrogation. The inspector Shimotsuki Mika heads for Aomori prefecture to bring back Yasaka, along with the enforcer Ginoza Nobuchika. What is waiting for them in that place is a “False paradise”.

A near future where the energy supply foundations have collapsed. Humans marked with the electric seal, known as Porters, are tasked with the transportation of energy cells. Trancers, electricity as their weapon, wield overwhelming combat ability, together with Chargers, carrying massive amounts of electric charge and providing charge to the Trancers, work in pairs to fulfil their duty.

Saki and her schoolmates enjoy what they consider normal lives in a peaceful provincial setting.​ Only their village cannot be of this era.​ Its customs differ from those of any known in modern day Japan.​ The landscape,​ while familiar,​ is also much more constrained than what modern day maps may exhibit.​ So when six friends embark on a journey of mental and physical training,​ this fateful journey will lead them to a series of mind-shattering truths.​