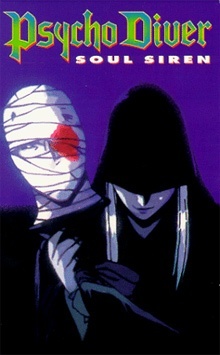 Reading the synopsis one might think that sci-fi psychic devices, an idol with mental trauma and a secret cult is too much for a 45 minutes OVA, but managing to convey a complete story with many different interconnected elements is exactly this show’s biggest strength.

Story:
While most of its aesthetic is borrowed from Noir movies, at its core Psycho Diver is more of a hardboiled detective story. Except that instead of being a traditional detective, our protagonist Busujima is a Psycho Diver, someone that dives into people’s consciousness with a psychic device in order to unveil the reasons for someone's trauma. In order to achieve that however, it’s necessary to understand the person beforehand, and therein lies the mystery that needs to be solved. Who exactly is controlling the Idol Yuki? What trauma is she holding?

One of the best aspects of this show is extremely tight pacing, no time is wasted at all. The tension keeps building up throughout the whole thing and by the end the story reaches a perfectly satisfying conclusion.

Art & Animation:
As briefly mentioned before most of the aesthetic are in full Noir fashion, with extreme lighting being present in most shots. The composition of most shots is well-studied and helps convey the feelings of the scenes.

The psychic dive also deserves a mention for how they bombard the viewers with symbolic imagery so much so that it is overwhelming, but completely in line with the story as that is what our mc experienced as well. Only with knowledge that is gained throughout the rest of the show the cryptic images are decipherable and one can gain a better appreciation of them.

With that said the animation is for the most part minimal. Most scenes consist of stills and most animation is reserved for the few action scenes. Despite this the show managed to have a coherent visual style and while not necessarily impressive, its visuals never felt lacking.

Music:
The music is interesting, most of the show has extremely eerie and tense tracks with intense beats, that use synth and industrial sounding elements but then there are also the songs made by the idol that have a distinct hip-hop style. Nothing spectacular but OST always enhances the scenes so it does its job. Same with the sound design.

Characters:
The characters in Psycho Diver are far from being particularly developed or deep. The mc in particularly could have really used some flaws to give him more personality other than being the generic good guy badass. Despite this for being 45 minutes long the 7-8 characters that are important all have clear motivations and purpose to the story. They might not be much more than stereotypes, but they all accomplish their roles in a satisfying manner.

Dub vs Sub:
The dub changed a couple of things from the original. They dubbed the songs from the Idol Yuki, and they added some narration by Busujima in some otherwise silent scenes. While in another show I could see the narration fail horribly, I think that this time it fit fairly well with the Noir/Detective style of the show. We could follow the thoughts of the mc as he is unravelling the mystery and it helps to follow along with what is happening.

The EN dub actors gave a pretty good performance, if a bit weird at times. While the Jap one while being more professional, is also more forgettable. It just sounds like every other anime ever.

I highly recommend checking Psycho Diver out. It’s a forgotten gem that doesn’t waste your time at all and is very unique.