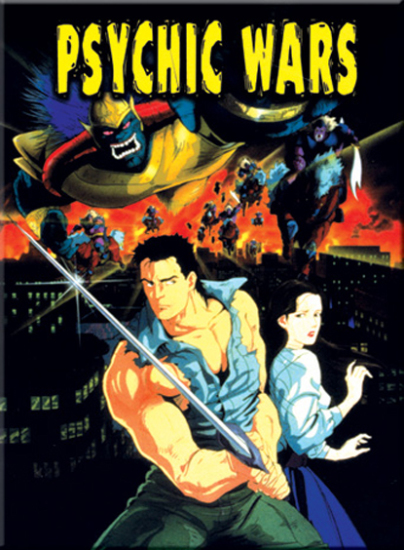 Story
*Dies laughing*. Oh dear lord... where to begin. Psychic Wars is easily one of the worst things I've ever seen, and only Baoh rivals it. When I say bad, I don't mean terrible Angelique or Wild Cardz unwatchable bad, I mean hilarious YOU MUST SEE THIS bad, like something you'd see on MST3K, but way funnier.

The "plot" revolves around Ukyo, who somehow gets imbued with some sort of psychic power (that just gives him an outer or inner glow of sorts and lets him punch hard) that's to be used to destroy some demons in the past. Who gives him these powers? Five or six old women who are floating around in another dimension, it seems. Making sense? Good. So, Ukyo and his girlfriend then get sucked into a vortex that looks like Sliders gone wrong, and end up 5,000 years in the past, in a time when the demon army became extinct and humans thrived. His goal? To kill off the demon army so they don't kill humankind. Lots of punching and glowing ensues, along with plenty of demons who appear to be overweight Star Wars monsters wearing Princess Leia's gold bikini outfit.

As if the plot wasn't bad enough, Psychic Wars is also plagued with some of THE worst pacing I've ever seen. Scenes randomly just end (with the background music ending suddenly just before it), flashbacks happen out of nowhere suddenly, and stop just as suddenly, or things happen for no reason such as the badly drawn sex scene near the end. In normal things this would piss me off, but it excelled in Psychic Wars, adding more to an endless bounty of horribleness that you get from watching this OVA. Truly one of the most horrible plots I've seen with atrocious pacing, yet so, so, so funny.
Animation
The visuals were decent (hence the extra .5), but in general the special effects completely owned anything else redeeming the animation would have had going for itself, and plummeted it right back into crap-land. First of all, Ukyo has a nice glow he gets when his powers are activated. It literally looks like someone took the character in Photoshop and applied an outer or inner glow (while making him look like he's powering up DBZ style). The monster designs, as mentioned above, were just terrible and looked so bad. Not to mention Ukyo's superhuman type powers or movements of the demons that looked so cheesy, such as them flying through the air in a straight line. Sometimes the animation looked like someone was holding a cel and moving it across the page. In particular there was a scene where you are watching a car drive across the screen, and the wheels are turning in the middle, yet the car is moving terribly slow and totally straight! Behind, the foil-looking waves glimmer against a washed out blue sky, looking fantastic (ha!). Everything about the special effects and movements were just bad, so bad... but just like the plot, so entertaining.
Sound
The music was cheesy synthesizer beats that I suppose fit the tone of the series, but the music placement itself was ridiculous! Imagine a suspenseful song starting in the middle of a suspenseful scene, and then having it just stop right in the middle of the action, leaving silence or just the characters' voices behind. This happened SO MUCH and it made me laugh every time. Or, the music wasn't around at all, or was completely wrong for the tone of the scene. Hilariousness all around. Voice acting was OK, but the main demon's voice near the end sounded like a microphone trick from the 80s -- CHEESY.
Characters
What characters? We have Ukyo, who we know is buff (since, you know, all doctors must be bodybuilders) and has the strange powers, his girlfriend, and then the tons of demons. Oh -- and the five or six spirit women we see occasionally. There is no development, no empathy, and no character stereotypes... but hey, does it matter? It's not like you are expecting this to be a plot-heavy OVA by any means, just read the description for god's sake!
Overall
You might be wondering why I rated this so highly when it very obviously was so bad. That's because the enjoyment factor of watching this far outweighs the fact that Psychic Wars is one huge gaping fault in the first place. If you are looking for something entertaining, or something that makes you laugh when it really wasn't intended to in the first place, you simply must watch this (and then Baoh, it's twin in spirit). Seriously, pick it up right now. You won't be disappointed -- at least not in the way of entertainment.