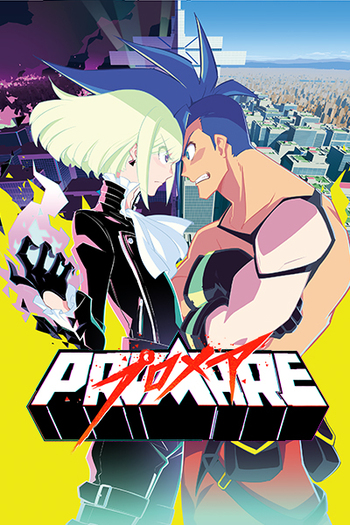 My experience with Studio Trigger's, as well as director Hiroyuki Imaishi's work, is minimal: as of this review, I've watched Darling In The Franxx (which I loved despite its great shortcomings) and SSSS Gridman (which I pretty much disliked except when Trigger's animation was involved). Nevertheless, these credentials were enough to show me the unlimited potential that the studio could bring to the buffet known as anime. With Promare being their debut feature film, I decided to catch the earliest screening I could, bringing nothing but miniscule knowledge of the film's details and a cautiously optimistic expectation.

The first question I had going in: would the film be "stupid" stupid, or gleefully/awarely stupid. I can safely say that its the latter choice. The story itself doesn't bring too much in original event-turning or a groundbreaking moral or message. However, the intentions of Imaishi and the rest of the Promare crew leaned less in that direction, and rather go into the feeling of the story's actions through visuals. It makes for a simpler, more forgiving experiece if you keep  this idea in mind.

Some twists lay into predictability (, while others are much more ham-fisted in the sense of the film's more playful nature, which is a big plus. The fact that the movie is generally fast-paced helps to alleviate the pain of prolonging twists you already see coming. Some points of the 2-hour long film would tend to drag a lot more....

....If it weren't for the visual department. Any person even seeing a lick of promotional material for Promare may guess that it's main selling point is the animation and striking art style. Hands down, it's the best part of the film. As someone whose least favorite genre in media is action, I can say that every fight sequence felt so invigorating and a breath of fresh air. It's amazing to see such proudly ridiculous character/model designs play off in equally proud, ridiculous animated environments. Not to mention some creative uses of lighting and an impressive interpretation of fire. Most of the time, you even forget that you're essentially watching simple shapes take form into bigger pieces of a picture.

I'm also not one for what are labeled as "hype soundtracks." Most tend to leave me with an empty feeling afterwards. That said, there are moments of Hiroyuki Sawano's music that genuinely felt in-place and stood out in that regard. Apart from the cool electronic sounds giving a sense to the world present, some of the themes were well done and haven't left my head since watching the film yesterday; the two standout tracks being "Kakusei" and "Inferno."

Having saw the English dub, I feel it's worth mentioning that its a worthy dub. Parts of it reminded me of the cheesy yet wildly personality-driven days of FLCL and Outlaw Star. There are plenty of seasoned veterans aboard such as Jonny Yong Bosch, Crispin Freeman, Kari Walgren and the imcomparable Steve Blum, all of whom are fantastic. However, the scene-stealer of them all was the voice of Galo: Billy Kamentz, a recently rising star in the dub community. His performance was one easily one of my favorites I've had in some time.

With the abundance of side characters and a limited runtime, it comes to reason that not every character would get the opportunity to shine. Still, the movie makes due with brimming as much personality out of each one, thus making them more memorable. When it comes to the central characters- Galo, Lio, and Kray.... every one of their arcs were manuevered in ways that helped to give a more complex background to their usual archetypes. Any scene featuring one of the three brings the film to full momentum, and it made the experience more engrossing than I originally thought it'd be.

For what I predicted would be a simply goofy and fun experience, Promare managed to push the envelope in ways I didn't expect, that I'm suddenly compelled to give it a second viewing ASAP. The action and the overall aesthetic of the film were great breadwinners in the grand scheme, and if that is enough to come by for you, this is a top priority.

This is made by the same people who did Gurren Lagann and Kill la Kill and it is AMAZING. If you liked Gurren Lagann and/or Kill la Kill, you will also like Promare. The colors pop, the songs are heckin bangers, and the animation is fun and exciting. Yeah sure you can kinda guess the plot, but WHO CARES. Not me. The story was still good and well executed, with plenty of hilarious scenes and nothing gets old. The characters are great and they were able to get enough across to give them proper depth and you see what drives them so you get attached. Luckily, no real big sad moments. Just lots of cheering for our heroes. It's a really fun movie, and any anime nerd should give it a chance.

This was both kind of cool and kind of cringy and i'm torn between how to feel about it. This gave me major Incredables vides tho and the shit was my childhood so I can't hate it. The plot was really cliche and I guessed almost everything before it happened but I still reallly enjoyed watching it unfolde. The only thing that I really couldn't get behind were the fights but I am biased because I don't like meache anime so don't take my word for it.

Oh but the Characters! I don't even know myself how to feel about them. Galo was your typical hero complex shounene protaginiste but he was also super quicky! In the beginning when I heard his nicknames I was kind of like "seriouly, is this guy for real?" but by the end of itthey grew on me and I just found it funny. His burning soul thing is really cringy tho and my feelsing for him are so conflicted. Lio is pretty chill. (Haha..ok, yeah; that wasn't funny, I know.) The scene when Galo says something very rasict and he gets such a furious, and offended face is when I first really notcied him. He could have been a lot more spitful and concited but instead he was just a guy desparaate to save his people. I also love how by the end of the movie he was feeding into Galo's 'idiotic' quialities. They were just so fun to watch.

Also the ending was complete and utter crack. I have no idea what that was but the big ass machine was literally called Dues x machine so... I was just so blown any by the weirdness all I could really do scratch my head in confusion by the end of it. Some lazy ese writing to tie it off with a nice bow.

Promare is one of those peculiar movies that breaks the traditional quantitative ratings scale. While my personal rubric tries to account for the variance of subjective opinion that certain anime will prompt, Promare takes subjectivity to such an extreme that any rating I give is essentially meaningless. I offer this disclaimer in order that the numbers that I associate with each category of this review not be taken as gospel, because this anime simply cannot be evaluated with that kind of objective rigor.

I've described Makoto Shinkai's 2016 masterpiece Your Name as combining the absolute best of his filmography, and Promare does the same for Studio Trigger, reuniting the writer/director team from Gurren Lagann and Kill La Kill while also calling back to other related anime like Darling in the FRANXX and Panty & Stocking. While Trigger has the distinction of actually producing original works, they all tend to have similar strengths and weaknesses. The animation is always distinctly top notch, a modern pop style that's unique among contemporary studios. However, there's one thing that every studio Trigger work lacks, subtlety.

The plot is as predictable as a Hallmark Christmas movie, and while it did attempt to cover some interesting topics like prejudice and abuse of power, it never explored them with any level of depth. You knew who was "evil all along" who was going to do a "heel face turn" and how the primary conflict was going to be resolved ("spoilers": a giant robot fight of course!). The characters were so basic and archetypal that you could replace them with characters from Sonic the Hedgehog and the plot would be essentially unchanged (e.g. Galo = Sonic, Lio = Shadow, Kray = Eggman, Ania = Amy, Varys = Knuckles etc.).

The one aspect of the script that keeps this anime from total mediocrity is that it is at least somewhat self aware, with the characters acknowledging how idotic their actions are, and doing things like naming the Deus Ex Machina device the "Deus Ex Machina". While this may assuage some fans that the story is not completely cliche, the movie as a whole had far from a parody aesthetic. Although comedy is subjective, I just didn't think it went in far enough with its deconstructive humor (such as with Konosuba or Hayate the Combat Butler).

At least the production budget seemed to be put to good use. The animation was the best that Trigger had ever done, and the flashy action scenes mitigated somewhat the boredom of the predictable plot. And although I watched the movie dubbed, the voice acting was solid overall. I sympathize with the amount of screaming that the actors had to do, but overall every character had a voice that really resonates with their archetype.

If you're a fan of Studio Trigger's style, you can basically ignore my review. For fans of the studio this will be one of the best movies of the year. If you're more of a casual anime watcher with no loyalties to Trigger like me, I don't think Promare is a must watch by any means. A fun watch no doubt, but not quite one that I'd go out of my way to see again.

I have to be honest. In the first about 20 minutes the movie was certainly not appealing to me. "Hm, firefighters turnt into transformers to fight the evil. Ok, sure."

Has I kept on watching, I could more and more see how wrong I was at judging the movie in the beginning:

We can surely compare some aspects of the movie with real life, but, even if we don't, the movie is so touching and brilliant.

I must underline that the colors from start to finish are surprisingly consistent and even so they do not become tiresome as they are so well used.

I can not but finish with the following sentence: This is not your typical "fire vs water" movie.