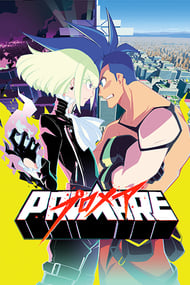 30 years ago, a massive firestorm tore through half of the world's cities, bringing the planet to its knees and giving birth to fire-wielding mutants known as Burnish. Now, a powerful mutant terrorist group who calls themselves Mad Burnish, lead by the soft-spoken Lio, threatens to destroy the earth again in a blaze of hellfire. The only thing that stands in their way is the Burning Rescue Fire Department and their hot-headed leader Galo. As these two burning forces collide, with the world as their battlefield, who will come out victorious?

My experience with Studio Trigger's, as well as director Hiroyuki Imaishi's work, is minimal: as of this review, I've watched Darling In The Franxx (which I loved despite its great shortcomings) and SSSS Gridman (which I pretty much disliked except when Trigger's animation was involved). Nevertheless, these credentials were enough to show me the unlimited potential that the studio could bring to the buffet known as anime. With Promare being their debut feature film, I decided to catch the earliest screening I could, bringing nothing but miniscule knowledge of the film's details and a cautiously optimistic expectation.Story:The first question I had going in: would the film be "stupid" stupid, or gleefully/awarely stupid. I can safely say that its the latter choice. The story itself doesn't bring too much in original event-turning or a groundbreaking moral or message. However, the intentions of Imaishi and the rest of the Promare crew leaned less in that direction, and rather go into the feeling of the story's actions through visuals. It makes for a simpler, more forgiving experiece if you keep  this idea in mind.Some twists lay into predictability (, while others are much more ham-fisted in the sense of the film's more playful nature, which is a big plus. The fact that the movie is generally fast-paced helps to alleviate the pain of prolonging twists you already see coming. Some points of the 2-hour long film would tend to drag a lot more....Animation:....If it weren't for the visual department. Any person even seeing a lick of promotional material for Promare may guess that it's main selling point is the animation and striking art style. Hands down, it's the best part of the film. As someone whose least favorite genre in media is action, I can say that every fight sequence felt so invigorating and a breath of fresh air. It's amazing to see such proudly ridiculous character/model designs play off in equally proud, ridiculous animated environments. Not to mention some creative uses of lighting and an impressive interpretation of fire. Most of the time, you even forget that you're essentially watching simple shapes take form into bigger pieces of a picture.Sound:I'm also not one for what are labeled as "hype soundtracks." Most tend to leave me with an empty feeling afterwards. That said, there are moments of Hiroyuki Sawano's music that genuinely felt in-place and stood out in that regard. Apart from the cool electronic sounds giving a sense to the world present, some of the themes were well done and haven't left my head since watching the film yesterday; the two standout tracks being "Kakusei" and "Inferno."Having saw the English dub, I feel it's worth mentioning that its a worthy dub. Parts of it reminded me of the cheesy yet wildly personality-driven days of FLCL and Outlaw Star. There are plenty of seasoned veterans aboard such as Jonny Yong Bosch, Crispin Freeman, Kari Walgren and the imcomparable Steve Blum, all of whom are fantastic. However, the scene-stealer of them all was the voice of Galo: Billy Kamentz, a recently rising star in the dub community. His performance was one easily one of my favorites I've had in some time.Characters:With the abundance of side characters and a limited runtime, it comes to reason that not every character would get the opportunity to shine. Still, the movie makes due with brimming as much personality out of each one, thus making them more memorable. When it comes to the central characters- Galo, Lio, and Kray.... every one of their arcs were manuevered in ways that helped to give a more complex background to their usual archetypes. Any scene featuring one of the three brings the film to full momentum, and it made the experience more engrossing than I originally thought it'd be.Final VerdictFor what I predicted would be a simply goofy and fun experience, Promare managed to push the envelope in ways I didn't expect, that I'm suddenly compelled to give it a second viewing ASAP. The action and the overall aesthetic of the film were great breadwinners in the grand scheme, and if that is enough to come by for you, this is a top priority.

This is made by the same people who did Gurren Lagann and Kill la Kill and it is AMAZING. If you liked Gurren Lagann and/or Kill la Kill, you will also like Promare. The colors pop, the songs are heckin bangers, and the animation is fun and exciting. Yeah sure you can kinda guess the plot, but WHO CARES. Not me. The story was still good and well executed, with plenty of hilarious scenes and nothing gets old. The characters are great and they were able to get enough across to give them proper depth and you see what drives them so you get attached. Luckily, no real big sad moments. Just lots of cheering for our heroes. It's a really fun movie, and any anime nerd should give it a chance.

I have to be honest. In the first about 20 minutes the movie was certainly not appealing to me. "Hm, firefighters turnt into transformers to fight the evil. Ok, sure." Has I kept on watching, I could more and more see how wrong I was at judging the movie in the beginning: Excelentttt animations Extraordinary music in the right moments Awesome effects Original and fantastic plot We can surely compare some aspects of the movie with real life, but, even if we don't, the movie is so touching and brilliant. I must underline that the colors from start to finish are surprisingly consistent and even so they do not become tiresome as they are so well used. I can not but finish with the following sentence: This is not your typical "fire vs water" movie. 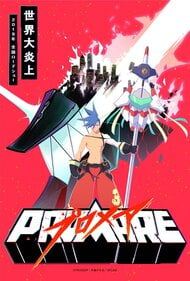 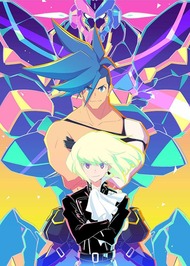