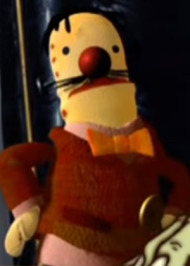 What kind of things could you learn from a hand puppet? Professor Dan Petory is here to save the day, and his topic of the hour is UFOs. With the background accompaniment of the Soybean Sisters, this ten minute short answers a variety of important questions including why do UFOs fly in a zig zag pattern, what do aliens look like, and why constellations appear the way they do?

940 users are tracking this. Log in to see stats.

StoryI love anything Studio 4C, for the most part. Digital Juice is the only thing I’ve seen that I haven’t enjoyed very much (though I still think I enjoyed it more than this), so needless to say, I was excited to see this had come out. What I walked away with was a feeling of disappointment. As far as a plot, you’ll have a hard time finding one. Then again, Studio 4C shorts aren’t necessarily known for their high amount of content, but still, I was expecting something a little better. The overall "plot", if there is one, is a hand puppet explaining (or discussing briefly) various things about UFOs, including why they fly in a zigzag pattern. This somewhat understandable "plot" is interspersed with complete randomness and weird scenes, which is typical of Studio 4C... then again, I found it really annoying this time around. Eternal Family is probably the most spastic Studio 4C thing I’ve seen, and the randomness there was quirky and wacky. In Dan Petory’s case, the spastic nature was almost grating and irritating, and I didn’t enjoy it. For example, we’d be watching Dan Petory at the chalkboard explaining something, which would then switch to these creepy singers dancing, a boxer punching someone, and a stick figure smoking a cigar at his desk. Hey, I’m all for randomness, but at least make it somewhat related in some way. Combined with the fairly obtrusive animation style and you have a "story" that just didn’t cut it in this case. Again, before anyone flames me over this, keep in mind I usually like Studio 4C stuff like this... for some reason this just didn’t appeal to me this time around. AnimationI’m really mixed on this one. Yet again, I usually love Studio 4C stuff, but the combination (and simplicity) of most of the animation styles in this short didn’t appeal to me. First of all, most of it looks 3D, but fairly bad 3D. Many of the scenes have a character on a single colored background that not only looks bad, but looks like some sort of stock gradient was applied to it. The character designs are also totally different from scene to scene, which is sometimes a good thing (the weirdness factor) and sometimes a bad thing given how freakish some of them look. I really, really didn’t like the Soybean Sisters and their sagging breasts and creepy appearance. The astronaut looked like he was going to eat my face off. In general, a wacky mix of animation that I can’t decide if I liked or not. Overall, still wacky in a good way, but I didn’t enjoy some aspects of it.SoundAlmost non-existent for the most part, except a few creepy scenes with singing (the Soybean Sisters). There was plenty of dialogue, including a few scenes where it would cut to several different people saying the same thing like "I saw it". Sound effects dominated the audio channel most of the time, and of course, there was an outro song. But that’s about it. CharactersSince this was a random ten minute short, there’s really not much I can say about this. Dan Petory was the main "character" as a hand puppet, he was wacky. The Soybean Sisters were almost the creepiest things alive, and sagged and swayed like creatures from hell itself. We are shown a few boxers that have no function except to hit each other and say things, a stick figure guy who smokes a cigar, and a few others. I’ll give this section a 7 for variety and weirdness, but I can’t say I found any of the characters very amusing or endearing for once. Even in Eternal Family, for example, there were a few characters that were so bizarre and wacky that I loved them all the same.OverallThough I’m a Studio 4C junkie at heart, I can’t give this particular short anything more than a 5. I didn’t enjoy it pretty much at all, and once it ended I still had the same mild "wtf" look on my face (and not in a good way). I never laughed, I never really smiled. The only real facial expression I had was cringing whenever the Soybean Sisters graced the screen, for the most part. The odd combination of animation was too out there this time and wasn’t appealing, and the lack of any music (except the creepy singing) didn’t help either. Poor try at a minimal plot as well. Though only ten minutes, this isn’t something I’d watch again.