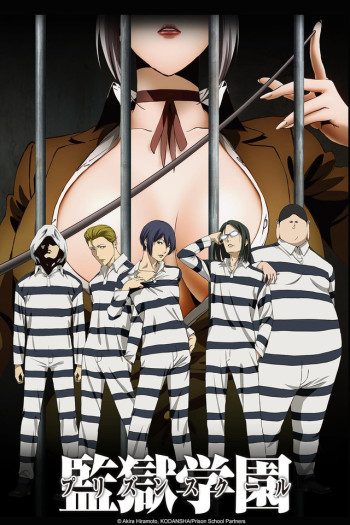 Not much to say about this anime, it's simply amazing, only a bit to much ecchi and weird scenes, but all the comedy makes it good. Story in unique and amazing, really hoping for a second season, which i know will come. The animation, and the faces the characters make in some of the situations, is just amazing, only this was enough for me to laugh my ass off. Adré, gakuto and the chairman, they are just hilarious. I really recommend it for people who like comedy and ecchi, but for people who don't like weird cartoony scenes, i recommend you to still watch it.

How did I fall upon one of the most unique anime out there?  I guess you can say I got really bored and didn't know what to watch when the Summer 2015 season rolled around.  I stumbled upon Prison School and put that on my "Want to Watch" list hoping for a decent laugh.

Hachimitsu Academy just allowed male students in their previously all-girl school with the addition of 5 new male students: Kiyoshi (our main character), Gakuto, Shingo, Joe, and Andre.  All they wanted was an honest high school boy life but just couldn't.  They instead chose to be more devious and peep on their girls' bath but ultimately got caught.  The boys were punished for their crimes by the Underground Student Council and sent to prison... inside the school.

Probably one of the most stellar of the year outside of Shokugeki no Soma which, coincidentally, is also done by the same studio.  The thing I love about it is the overexaggeration which that takes place.  One thing that I love is that I feel like they actually modelled a person's face and it kinda feels 3D with the way they do the shading and coloring.  It's really difficult to explain but most great things are like that.  One thing going ahead is that there's a whole lot of censorship because the shots they do are pretty much hentai so yeah.  That's one thing to look out for but I didn't really mind that much.

First off, I love the opening.  It just gets me really hype to listen to and matches the energy of the show.  Next is the great voice acting.  It's primarily from Gakuto who talks extremely formal but is shouting most of the time which is also hilarious.  It's kinda confuses me how they can say such vulgar things in a serious tone and that's what gets me.  Then there's the ultra serious and intense background music because there are other great moments that call for it.

One of the most eccentric, interesting side characters of all time.  Everyone has a thing that makes you love them like Andre's masochism to the school chairman's ass fetish.  There's not much character development as only one person sees any significant change.

I extremely enjoyed this anime so much I ended up reading the manga.  Now I'm skeptical on whether they'll greenlight a second season but it gets even more absurd than what it has shown so far.  It's not just a simple comedy where you can just pass time.  It was more than that to me.  It was... life changing...

This show is pretty messed up, and yet I marked the date of the next episode like many other less messed up animes airing this season. Despite it's obvious turn offs and all, or perhaps because of these, it catched my interest.

While I'm not against giving a good kick in the balls to any guy who deserves it, this anime goes a bit too far. Five guys attened a previously all girls school hoping to get girlfriends and maybe a bit more. Unfortunately for them, the girls aren't interested. In fact, they pretty much ignore the existance of the guys. One night, like boys often do in anime, they decided to go peeping on the girls in the bath and, like usual, things don't go the way they planned. The boys get caught and are dealt with by a group called the underground student council who makes it their goal to punish disgusting boys. The council throws the boys into a prison like building in the middle of campus and from then on, their days consist of hard labor, watching their classes on a monitor, beatings and torture, and of course some crazy antics. The beatings are rather extreme and are given for small things. The boys are treated like prisoners and not allowed to have things like magazines, phones, etc.

The story is rather messed up in just how far these women go with punishments and the whole prison thing. I actually feel a bit bad for the guys. They are high school boys. They are going to do perverted stupid stuff. A good whacking is one thing, but prison and harsh beatings is a bit much.

The animation isn't too kind either. It's harsh, dirty, and unforgiving. It's doesn't make anyone look particularly good and it definately doesn't make the guys more appealing. Only one of the guys, the main character, even looks half decent. The big one has the weirdest most unrealistic face of all that just annoys me whenever I see him.

I can't say much about the opening or ending because I just skipped it.

The characters fit the story well and vice versa. Each one is different. It's only the fourth episode in, but none of them are well developed yet. We only really know extra about two of the guys.

However, if you can't deal with pee and poop, you may not like this.

Everyone now and then I cannot fully review a show because it has a very narrow appeal. Prison School is one of those shows.