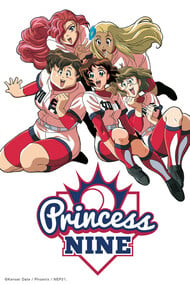 Ryo has always enjoyed baseball, and has an incredibly fast pitch to prove it. She is better than any man she knows, yet has never really put her skills to the test; after all, baseball is a “man’s game”... until now! Keiko Himura, the chairman of Kisuragi High, has a goal: to create a team that proves women can play just as well as men -- if not better -- and she has chosen Ryo to be the new team's captain! With 8 more teammates to find, can the girls lead the team to the ultimate victory, to win at the famous stadium Koshien?

A Baseball Team at a Prestigious Girls' School?

In My Father's Footsteps

We Need You, Izumi

The Future on the Line

i don't typically write out reviews for shows, but because i was seeing so many negative comments on this one, i figured that it couldn't hurt. the breakdown of my specific and overall scores is as follows: story all right, so. the story is, admittedly, a little cliche. a rag-tag group of girls of many backgrounds attempt to beat gender roles and get to the top. but in my opinion, it's still really enjoyable. there are some little side stories and side plots that seem pretty useless, and some very strong plot armor, but if you avoid overthinking it and just enjoy the show, i, at least, was able to get past it. some of the romance and platonic relationships feel a little forced or clique-ey, but i was able to enjoy them nonetheless.  animation this show is a bit on the older side (considering all the newer anime that's been coming out); 1998, i believe. so i do think that the animation is pretty darn good. it's dynamic enough to be interesting, and the art style is pretty nice. someone else mentioned that their batting stances were stiff, but i really don't think it took away from the show (in my opinion, at least. i am not, by any means, a baseball expert). overall, i really enjoyed the art style, colors, etc.  sound a quick disclaimer before you read this portion: i did watch this in dub. so my opinion might be slightly different than some others'. now that that's out of the way, in terms of voices: some of the voices were a little squeaky and shrill. but to be honest, i don't think that's completely out of the ordinary in many animes. so it really didn't bother me too much. the music was not disappointing, but not outstanding either. i will not remember the background music, but it did certainly add to certain scenes. the opening song was catchy though, i find myself humming it when i'm around the house or running errands.  characters this one might get a little complex. there might be some very mild spoilers in this section, so if you would like to be completely surprised when it comes time for you to watch the show, then perhaps skip this part. i will say, to start off, that some of the characters are pretty cliche. you have the stereotypical girl who's in it to become an idol and who obsesses over makeup, etc and who only joined baseball for the stardom. you have the star pitcher who is the glue of the team but can be a bit naive. there's the vulgar one who taunts others. there's the drunk coach who also seems to have some hidden wisdom. i could go on, but i think you get the point. despite all of this, though, the characters were truly enjoyable to watch. their relationships seemed to develop at different rates and friendships bloomed.  overall i know that i made this anime out to be just all right through this review, but i really do want to stress that this anime is becoming one of my favorites. i did finish it, and i think that to get the full enjoyment, you do have to complete it. i saw that some other people who rated this badly only got through part of the show, but you just have to stick with it. to be frank, i am not good with my words and i think i wrote this review overly negatively, but i think that this show is different than a lot of other sports animes that i've seen! i do believe that this has become a comfort anime of mine, and i will be taking some time to watch the subbed version, just to get the full experience. thank you if you've read all the way down, and i hope that you will consider giving this show a chance.

I dropped princess nine after reviewing the plot and watching the ending. The story was filled with cliche characters, yet was fairly enjoyable from what I had watched. There was a hint of romance, but it was actually not the absolute best sub-plot there was. In fact, it really disappointed.  On a good note, it was very VERY interesting and could be sweet at times. There were many plot twists that related to a true story. I would say that the ending could have been better, and the plot could be more solid. Other than that, it's a nice anime just to watch for fun.

Let me start off by saying this: When I picked up this series, I expected to watch an anime about girls forming a baseball team while playing as they went along. I've seen H2, Cross Game, Major, and Ookiku Furikabutte...I'm familiar with the baseball anime/manga genre and what's expected of it. My favorite anime, The Slayers, is a 90's anime.  Ranma 1/2, which will occasionally feature Akane throwing a baseball, also came out of the 90's, as did H2, so I had a general idea of what to expect for a 90's anime, and a 90's baseball anime. What I didn't expect, was to see the main female lead, Ryo, throw a couple pitches in the first episode, and then not actually see anyone play baseball for over 5 episodes (to the point where, annoyed, I dropped the series). Breakdown on my ratings (which covers up to the first five episodes): Story The story/concept sounded interesting when I first looked at it; someone trying to form a girl's high school baseball team and get them to koshien, all revolving around this one girl (Ryo) who has this great pitch. Put that way, yes, I can see that there would be member drafting, but to spend entire episodes on it is much too dull.  The characters that already wind up being established (especially Ryo) sort of either become silly background characters or love interests.  When the second part of the first season of Major came out (Goro turning 9), and he had to find more members for the team, there were still practices in between that and a ball at least being thrown! In Princess Nine, I don't recall seeing a baseball thrown since the first episode.  The tennisball and billiard balls don't count...I mean a baseball being thrown/playing catch, or actually, you know, PRACTICING BASEBALL. Instead, the story is more focused on workings of the higher-ups/how the school president is finding and recruiting members, and romantic/dramatic tension between the characters that doesn't even really give them character depth. Animation Generally, the animation is fairly good for a 90's anime.  Ryo is drawn oddly at times compared to some of the other girls, but otherwise, was almost as expected as a 90's anime. There isn't enough in the expressions of the characters; even the ones that are all "cool" still don't give us good expressions, so the anime and characterizations feel very flat. The biggest knockdown in my rating on the animation is that, again, I picked this up with the expectation that it was a baseball anime.  Again, I was disappointed. If there was any research done on pitching and batting forms, it wasn't done very well.  From looking, it doesn't seem to have had any research put into it at all. Ryo's form looked alright (if not a bit stiff) until her arm started to move.  That's where all the problems arose; it didn't give any sort of "awesome" feel to it/the motion was very flat and unrealistic. The batting forms, too...they're very stiff, and even though some of the batters are supposed to be sluggers (and a beginning episode where pretty-boy hit a long foul off Ryo's pitch), I'm not getting any feel of effort from their part.  It's like some unenthusiastic person barely even trying, but seeing the ball fly.  Again, very unrealistic form and poses, and even the way the bat is swung is incorrect. Sound This would be higher if the opening and ending songs were better, and the background music was good enough to get me excited.  There aren't many exciting parts within the first five episodes, but in the first episode when Ryo was first shown off, the music gave me absolutely NO dramatic tension or feeling of expectation. The music in Major gives a lot to both of those, and even Cross Game's bgm will make you practically hold your breath in anticipation.  Not Princess Nine. Characters I only remember the name of one character, and that's Ryo.  I don't even know if I should call her the FMC (female main character), because though we see her often, the show seems to revolve more around the president of the school and her efforts in recruiting and scouting prospective members of the team. After five episodes, I expect to know the main characters very well.  Instead, I only know Ryo a little bit, and the others are mysteries.  The characterizations are completely one-dimensional, and gives the viewer no connection with them. The only character so far to show personality is that billiard girl.  Ryo showed personality at the start, but then started to fall to the side. For all the talking and dramatic/romantic attempted tension, the characters are still flat and uninteresting (again, except for the red-head billiard girl). Overall This is one of those animes that should never have been made.  I gave it a low score because I kept watching the next episode with the thought of "I hope it picks up the pace in the next episode".  Once I hit episode 4, that became "I hope they start playing baseball". Once I finished episode 5, I threw my arms up in disgust and didn't even bother checking out the next episode.  I'm fairly optimistic, but I'm not going to watch entire episodes dedicated to the president of the school scouting and getting each and every member of a 9-person baseball team.  As it was, I skipped through portions of the fourth and fifth episodes. Nor did it leave enough of an impression to get me to try starting at around episode 10.  Even if this had been the first baseball anime I ever picked up, I probably would still feel the same.  This isn't a baseball anime, it's a waste of time. This just isn't worth watching, unless you're a fan of poorly done romance dramas with a smidgen of sports talk on the side.