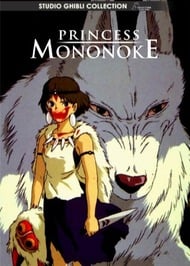 With the rise of the Iron Age in feudal Japan, man and nature grow increasingly at odds. As mankind infringes more and more into the kingdom of the beasts, many of the elder animal gods begin to succumb to their rage, cursing themselves as they lash out at rural and urban settlements alike. When a young Ashitaka, hero of his village, is imparted with one of these curses after slaying a crazed god, he forces himself into exile to prevent further harm to his village. As he ventures out into the world, however, he discovers just how dire the straights have become - with man and beast ready to break into all out war, his curse becomes the least of his problems. As both sides teeter dangerously on the side of outright slaughter of one another, Ashitaka sets his own problems aside and, using his charisma and honor, seeks to quell the hatred before it gets beyond repair - but will he be in time or is he simply delaying the inevitable?

The spiritual successor of Nausicaa of the Valley of the Wind, Princess Mononoke is Hayao Miyazaki’s take on the same subject but under a different light. And it was about time to get another epic because I was getting fed up with his cheery settings and simplistic stories. It is far more violent, angrier, and lacks flying machines, something Hayao loves to add in all his works. We can say it is his darkest work ever, as his protagonists are more anti-heroes, selfish and full of hatred, unlike his usual positive and idealistic ones. At the same time the antagonists have far more understood reasons for all the damage they do to its other, unlike the rather obvious to be wrong from the start ones from Nasicaa. Also, the setting is almost like it takes place in Japan’s feudal era, and even shares its mythology of spirits. It is thus far easier to feel a connection to a seemingly historical period; even more if you are Japanese yourself. That allowed for this movie to not feel as a rehash, but as an interesting variation, far more plausible and sympathetic to the average viewer. The production values are top notch as always, with everything feeling alive, ever moving and ever feeling like they are there for a reason. The contrast between the war-like human fractions, next to the equilibrium state of the forest spirits is depicted very successfully. It also has some semi graphic scenes of violence that for some may not be suitable for children or family in general. But anyways, the story is about two nations being at war, their actions resulting to the destruction of the surrounding forest and creating uproar from the spirits, as some of them are poisoned by the charcoal and the gunpowder. The protagonists are Ashitaka, a prince who looks for a cure by a curse inflicted by the war, and San, a human girl raised by wolves after she was abandoned as a baby. Both of them intervene in the war for rather selfish reasons and the whole deal does not play out as morally clear ecology-pro as it did in Nausicaa. Both parties need to maintain their way of life because otherwise they will be annihilated. There are many scenes that make their motives understood and even sympathized. The premise is again about nature getting angry with mankind and its constant wars and one could easily label this film as again nothing but anti-war propaganda for tree-huggers. The same excuses I mentioned in my Nausicaa review apply here as well; being a family-oriented film is just fine and expected to have that and it is not black and white kiddie stuff either. I was also impressed to see Hayao’s usual character archetypes to have a far more selfish, complicating and violent demeanour. I also liked the action scenes, which being earth-based and mostly based on classic means of warfare meant for a far better feel of realism and choreography. They sure feel more real and exciting than any shonen show ever did. Another thing of notice is the conclusion itself, which feels almost like a bad ending of sorts. Although the basic disputes are solved, the characters are left before an unknown future, away from one another, hoping to rebuild their worlds as better places. It is not for certain if they succeed or even if they meet each other again as friends. It is again left to speculate anything the viewer feels like would happen. That allows for some food for thought even after the movie is over. Princess Mononoke is more mature, complicating, and greyer than Nausicaa, a movie that was already all that in comparison to most other family oriented films. In fact, it might even not be for families at all because of some really nasty violent scenes. I consider it an equally, if not a bit higher, good feature; yet I must point out that the Nausicaa manga version was better for being long enough to make you see various aspects of the world, as well as watching them long enough to like them. That does not make Mononoke any less significant and I still recommend it as a very good feature.

Like Grave of the Fireflies this is one of Studio Ghibli's darkest films - the film is very creative and the story, for what it is, is quite engaging, however what I really don't understand is why do the humans want the head of The Deer God? It doesn't explain what they are going to do with it or why they need it, it just seems like that woman is endagering the humans for no reason and hey they give it back to him and everything goes back to normal, so that whole sequence seemed abit pointless - that's my major problem with the film and the story, but everything else before that was perfect: More in video review http://www.youtube.com/watch?v=ev85oTpBmlU BBFC rating - PG for moderate violence, mild language, threat and scary scenes 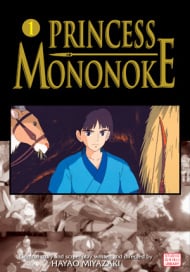