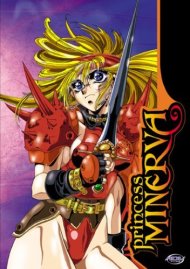 914 users are tracking this. Log in to see stats.

StoryWhen I first picked up Princess Minerva, I had no idea what it would be about (except that I knew it was fantasy related). My viewing began in a positive fashion, but eventually spiraled down into boring-ville. The story starts off with a brash and spunky Princess Minerva literally ripping through the title screen (humorous for sure) to announce that she wants a group of bodyguards. Blue Morris (who chooses these names?!), her sidekick, listens begrudgingly and then Minerva begins to laugh... and laugh, and laugh in slow motion while the screen pans away. This is just the beginning of 40 minutes of randomness that at first is really quite funny. The humor itself reminded me of Suddenly Princess or something of that nature, with random lines screamed by characters or random events happening all over the place. The humor continues through the OVA as a great tournament starts to prove who is the strongest in the kingdom. A varied cast of bumbling characters all are shooting to win, including Minerva herself who parodies two famous Go Nagai superheroes: Cutie Honey and Kekko Kamen (and indeed, her costume is even reminiscent of both). The humor is funny, the action scenes in the tournament are entertaining, and the pacing is well done... until the last 10 or 15 minutes. At that point, it suddenly becomes not only confusing, but almost mystical in nature as far as the plot goes. It loses the humor and becomes serious fighting with basically every character involved up to that point, and quite frankly made me bored to tears. I think my mind fuzzed out the last part of the OVA out of boredom, and that’s not a good sign. The ending was unexciting (though I didn’t care because the story lost me a little ways back), and in general I felt sort of cheated. Had it continued to be random humor-filled, I would have thought this was much better. Alas, eventually it only falls to the average level as far as the story goes. Rated it slightly higher than a 5 just because the random humor really is funny at the beginning. AnimationYes, it’s an older OVA, but who cares? The animation is decent and above average, though nothing super spectacular either. Character designs are fairly older looking with large eyes and pointy features, and colors are all over the map. The most unusual character design is definitely Cutey Kamen’s outfit, which looked quite a bit like the two superheroes the character is making a parody of. Fights themselves are decently done, backgrounds have a normal amount of detail and the comedic scenes (with chibis or otherwise funny looking people) are well done. I can’t say much about the animation because it really was fairly average, but still fit the tone and feel of the OVA.SoundFairly generic synths, no matter how you look at it. I skimmed the OVA again trying to remember the music and came back with nothing exciting. It fits when it needs to, but is void for a lot of the forty minutes. The weirdest musical accompaniment is definitely Cutey Kamen’s theme song she sings whenever she fights, which is weird but still uninspiring. I can’t really say much about the music, since it was fairly boring and generic (definitely an average score is warranted here). Voice actors are fine for everyone involved.CharactersProbably the best part of the OVA by far. We are introduced to a bunch of characters that all are fairly weird and quirky (in a good way). There’s the manly woman fighter who just wants her damn rice ball back, there’s the boy who stole the said rice ball, there’s a "former cleric" who seems to have dubious reasons for not being employed, there’s the sleaze-o Silver Rogue, and a whole lot more. Each of these guys managed to make me laugh in some way or another, mostly because of how they fit in with the random comedy. Minerva was probably my least favorite, with not much to her except the superhero outfit and the weird singing. The others definitely were more hilarious in my book. OverallOverall, Princess Minerva really could have been something funny with the random comedy aspects, and instead turned into something fairly generic. The animation is fairly average and the music is uninspiring, but the characters were quite funny and the humor itself made up for any other shortcomings. I would have rated this higher had the ending not dive-bombed like it did, and had the humor stayed consistent throughout the OVA. As it turns out this joins the ranks of unfinished OVAs or series that could have been something great, but fell by the wayside instead.