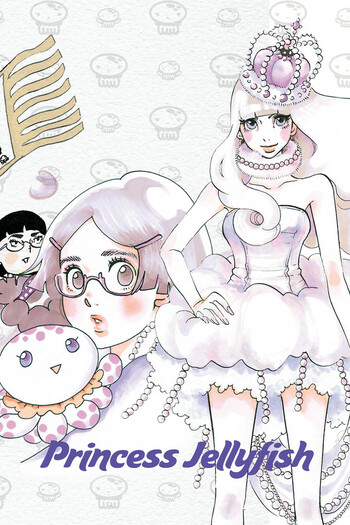 Kogure-sou is a crumbling old apartment building of just six rooms where four people live. On the first floor are the owner, a very old man who wants to have sex before he dies, and a girl in university who pines in a sad and complicated love. On the second floor are a salary man who finds meaning to his life in spying on the university girl below him, and Mayu whose boyfriend disappeared three years ago. Also involved are the florist from the nearby shop who worries over her husband's infidelity and Mine who is still troubled by a crime committed a long time ago. What all of them strive for is love, but they all find nothing but pain and bitter disappointments. Do they realize that what heals them is actually the run-down little apartment building and the real human warmth that they share with each other?

Yoneda Hikari, a business student at the culinary school, was tricked into giving up his dorm room and now has to share an apartment with 8 other people. Yoneda is hopeless at cooking; the only thing he can make is Miso soup. But his optimistic and kind hearted nature draw other residence to him, including Karasawa-san, also known as “curry man”. From the moment Yoneda stepped his foot into this boarding house his everyday life became full of adventure. Can Yoneda get along with this diverse group of people and make a home for himself?!

Sadashima fell in love with a handsome senpai while she was in high school, but didn't have the guts to tell him before he graduated and moved away. When Sadashima graduates the next year, she follows her senpai, Shirahai, to Tokyo and manages to move in next door. She totally believes that the two of them can now hook up, and can't wait to knock on his door to 'coincidentally" find themselves neighbors. She's flabbergasted to find a woman answering Shirahai's door, and then blown away to find out the woman is Shirahai! He's had a sex change!

When Oriko kicks Machi out of her apartment, he simply forces his way into the apartment next door, which happens to belong to his classmate Yurara. Yurara is too shy to throw him out, but will Machi's advances become too much for her to put up with?

Elissa is having trouble changing a flat tire when she is caught off guard by a man offering her help. The man, who appeared out of nowhere, was Walker Buchanan, a handsome man who had recently moved in to the upstairs of her apartment. Not wanting to be in debt to a man, Elissa tries to refuse Walker’s generosity.

Ten Serizawa has a two-hour commute through the mountains to high school every day, so she can’t spend much time hanging out with her friends in the afternoon. She decides to move into the local boardinghouse, where one of her friends and three other boys are living. Ten’s friends consider her to be as oblivious as a rock when it comes to noticing boys and falling in love, but will she be able to keep her calm and steady heart in her new living situation?