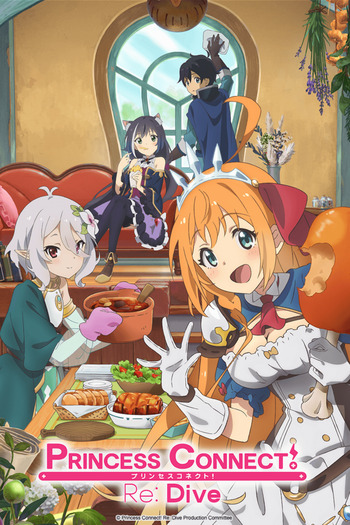 If you want to watch something soothing and relaxing, easy on your soul, this is it.

This series main focus is to evoke a sense of nostalgia by portraying the childlike innocence of youth, exploring a dreamy- colorful fantasyworld, with a very slow and non-serious pace.

Don't watch this thinking there is going to be actual plot, this is at most an artistic expression of trying to convey said feelings. And it does a very good job doing so.

The animation is beautiful, you will be blasted with a world of colors and good feels, voiceacting is superb. OP/ED songs are extremely nice to the ears too, and fit perfectly for the fantasy world portrayed on the screen, similiar to Konosuba in that sense.

As for the characters in the series, they are basically just children. That's it. How crazy is that?

It's basically an artist, funded by a game-company, using the money on everything exept advertisement.

Before I got into the series, I looked at the cast of characters, and they look really nice and appealing. A lot of them are voiced by the seiyuus from my favorite idol series, The [email protected], and it's one of the reasons why I decided to check out this anime. Then I watched the whole season of it, and I've been very pleased on how this isekai anime has turned out. This anime was made by the same director who made KonoSuba, though unlike KonoSuba, Princess Connect Re:Dive is more like a Slife-of-Life Isekai rather than an Action Isekai, and it doesn't have much of a story. However, it doesn't mean that it isn't an entertaining, funny show, as it doesn't have to be exactly like KonoSuba. Not to mention the animation looks really gorgeous, and this anime is based off of the mobile game, which is an RPG with a lot of colorful characters.

The best part of the series are the characters, because most of the characters, if not all, are really charming, especially the main trio girls who are Pecorine, Kokkoro, & Karyl, who all have their unique personalities. Pecorine is the genki girl who loves to eat food, Kokkoro who's a stoic girl and cares for her lord Yuuki, and Karyl, who is the tsundere neko, and gets angry with her friends do stupid things. Even the main guy Yuuki who's been quiet most of the time has had great, funny moments. My favorite episode is episode 8 where the girls went to the beach and find food, and my gosh, Pecorine looked gorgeous with her swimsuit. The voice acting is very well done, particularly M.A.O., Miku Itou, and Ricca Tachibana who all have done an outstanding job. Overall, I recommend the anime for fans of isekai if you don't mind the lack of much plot.

This is probably the first and last time in my life that I have watched such a high-quality game adaptation.

This anime can be compared to a slightly weaker version of Genshin Impact and KonoSuba in terms of atmosphere. We have several individual crazy personalities, bizarre and wacky character humor, amusing running gags, and several very appealing character relationships that add to the creaminess of it all.

I didn't know the game before and only glanced at it afterward to see how similar the game and anime were. The concept is the same, but the anime is a bit different, which doesn't affect the quality in any way. One thing I have to say is that I love that they actually used the main song from the game again as the intro song for both seasons to create an even stronger bond.

Of course, it should be said that the anime seems very generic at first glance and the fact that the characters are 99% female doesn't make it any better. And also the actual main story keeps both seasons mainly in the background and is transmitted only fractionally. If you're looking for a great storyline or expect a huge background, you definitely won't find what you're looking for. 3/4 of each season consists of everyday episodes, fights, and pure comedy. But it also has massive stronger and not only thanks to the studio.

The protagonist wakes up in a mysterious world with no memories of his old life, finds "new" comrades, and starts to enjoy his life to the fullest. In the course of the plot, you learn more and more fragments about the connection of the protagonist to this world and the truth that lies behind it. It is a slightly above-average plot, but nothing mind-blowing. To experience the full extent, you'll probably have to play the game.

The animations really made me stumped on this one. That SO much budget can actually go into an anime adaptation is beyond my comprehension.
The lighting effects are almost permanently at their peak. The dynamics practically never let up. The backgrounds and details are impressively beautiful.

Even in the most unnecessary scenes, immensely detailed work is delivered, so that one can only marvel as a viewer.

Completely average. You have some minimal backgrounds and a few monologues, otherwise, that's it. Also, most of the personalities are just old familiar stereotypes. BUT, here it comes! The characters are completely convincing on the basis of sympathy and charisma. Not only are they simply lovable, but they have excellent chemistry with each other and complete the dialogues and scenes as they should.

Certainly, I would have liked more character depth or better backgrounds and ambitions. But what I got here more than satisfied me by far.

Particularly positive to me is the protagonist Yuki (solely because I find him incredibly endearing) and Pecorine, who despite her demeanor and naiveté has been a very mature and adult person who prefers to talk out problems rather than allow them to escalate.

The intro is relaxing and simple, it's not catchy and it's not a masterpiece. But it simply has a very inviting melody.
And on the subject of relaxing, the outro is exactly what I want to see at the end. It shows smaller meaningless scenes from the characters' everyday lives, with very good contrast and a piece of very inviting and relaxing music.

The osts in the anime were very well placed and added a lot to the dynamic. And then we have the sound effects, as we know them from series like Fate and JoJo's Bizarre Adventure. Nothing else can add as much weight to attacks as this kind of presentation. Every single punch, slash, and kick had such a force that you could even feel it on your back.

If you're looking for an anime that resembles Genshin Impact or KonoSuba and is more into comedy and likable everyday episodes, you'll more than find it here.
The second season is slightly better than the first until the finale but drops off significantly at the end. Which makes the first season the better one, to my surprise.

This series can be easily forgotten, but not the positive memories.

WELCOME TO MY FIRST REVIEW!

This review is mostly spoiler-free, so do not fret! Let's get into it.

The plot was well-put, the stories connected well. However some things did not make sense, I still liked it. Also, the 2nd final EP made me sad in some parts, which made me like it more.

Pretty good, sounded magical. I loved the animation sounds plus how they organized everything. It had such a fun sequence and was nice.


Ahhhhhh. Characters. The best thing in this anime! My favorite one was Pecorine and Christina because of their personalities. Pecorine had such a bubbly personality which I loved most about her. She's the character I relate most to tbh. For Christina, I loved her sinister attitude so much. It added a good pop to the plotline!! All characters stayed true to the plot and I sincerely love the guild stuff as well.

In conclusion, this lands on a 9.75 numbered ranking! The company did a swell job on the anime, and I hope to see a new season come to light with this anime.

Guys and girls it's finally over the OxO has finished its season. The new and improved anime face will hopefully been seen again and used well RIP.

But for real reconnect is okay don't expect anything crazy good it's a game made into an anime, and it's not as good as grandblue. I'll be brief since there isn't much to say

first the animation is pretty good vibrant colors and fluid animation give the show probably some of the best lively art style I've seen in a while. The cg isn't to intrusive either when it rarely comes around.

The characters are okay Karyl (cat girl), and kokko (priest girl) are the best out of the bunch. But the side characters is where most of the comedy comes out.