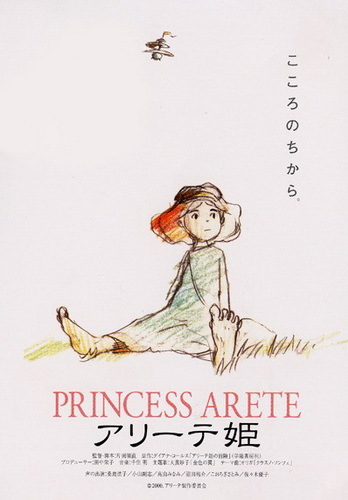 Story
This beautiful tale was created by Studio 4C, the makers of Comedy, End of the World, and other titles. The important thing to note is that Princess Arete is not a story based heavily on plot, but rather, heavy (but subtle) character development, beautiful imagery, and most importantly: ideas and concepts about our roles in life, life itself, and sacrifices we each make. Arete is a princess who has been imprisoned in a tower her entire life, not able to learn or experience life as she wishes. Occasionally she sneaks out of the tower and goes to the village below, where she is able to blend as a commoner, and be happy. Unfortunately, Dad has other plans in mind for Arete, and sends all the knights in the kingdom to treasure hunt, to compete for her hand in marriage. Though, this is all a pretense for the kingdom to accumulate wealth, and grow in power. Princess Arete takes place in a time of knights, kingdoms and castles, and the long gone sorcerers who were revered and feared. It should be no surprise, then, that the kingdom bowed to its knees when one of these sorcerers arrived in his flying machine, taking the princess away after a trick of magic. And this is where the story begins, and the point where you shouldn’t read anything else about the plot. Needless to say, there are quite a few things that will surprise you, and don’t necessarily fit in the idea of a princess/castle story. Truly, this is NOT just a film about those kinds of things; so don’t expect it to be a 100% fairy tale that sticks to the classics.

Princess Arete is heavy on thoughts and feelings, and opts for a slower pace instead of an action packed roller coaster. Instead of lengthy dialogues, we have thoughtful monologues. Instead of a plot that shoves things in our face, we are shown subtleties and ideas that force you to think about what the true purpose of the film is. For some, this pacing would probably be a turnoff, and would be considered too slow and boring to watch. I, on the other hand, ended up really enjoying it. You have to turn on the film with the understanding that it will be slow and sentimental, and not heavily based on plot or action, and I think you’d enjoy it too. Those who appreciate such slow features as Haibane Renmei or Kino no Tabi, would probably appreciate the sort of anime this turned out to be as well.

My one complaint, even though I did think the pacing was tolerable, was that there might have been a bit too many unnecessarily slow parts. The movie easily could have been condensed by one third, if not more, perhaps just by removing many of the gazing scenes.
Animation
There is no doubt that the imagery in Princess Arete was stunning. Those who love Studio 4C will recognize the simple character designs which have virtually no shading or lines for the face and body. Although some people dislike Studio 4C’s animation for this reason, I’ve always thought it was unique and fit well with whatever new thing they came up with. If you are a newcomer to Studio 4C, the best I can explain it is that the character designs remind you of watching an old family movie in the vein of Ghibli. Backgrounds were definitely the best feature. Each was exquisitely detailed, looking like something you’d see out of an RPG (like Legend of Mana). One of the focal points of the film was to draw you into its world through the use of imagery, both to make you understand why Arete wants to leave her tower so much, and also just to amaze you. This succeeded on both counts, showing us a beautiful eye-candy world that we’d surely want to visit if possible. We are shown a flying machine that looks like something out of Myst soaring over cloud covered mountains and a desolate valley, the sunset over a rocky ridge, castles perched above bustling towns, and goats pleasantly eating nearby grass in a field bordered by a lake. These images were usually accompanied by ballads of medieval times, giving them a mystical feel.

Computer graphics aided the visuals at times as well, giving them a very realistic looking feel. Nothing fancy like, say, an all CG masterpiece designed to look real, but subtle things such as panning out over a great valley, or going to a bird’s eye view from the previous angle of looking at someone straight on.

I general, I think anyone will agree (even those who didn’t like the movie as a whole) that Princess Arete is a visual treat to watch. Although the character designs might appear lacking, the painstakingly detailed backgrounds and expansive feel make up for it by far, leaving you with a sense of wonder at the world you’ve been shown. High marks in this category by all means.
Sound
Easily the best facet of the movie by far. The setting was medieval times, as previously mentioned, and the music fit like a glove. All melodies were played by a flute, lute or harp, reminding me a great deal of old school Ultima games. It makes you think of sitting in an inn, listening to a bard strum ballads while you drink ale. Well, maybe not that extreme, but it still fit perfectly! All of the music was very light and set in the background in an non-intrusive way, enhancing the visuals and mood at every turn.The voice acting was also wonderfully chosen, and fit the character types very well.
Characters
Now, some people might disagree with me on this one, but I felt the character development was pivotal to the series, and though subtle, it really ended up succeeding. Arete is easily the most prominent of the characters, and the strongest in spirit as well. She wants to learn, to experience wonder and live as a commoner, but she isn’t given the chance. In addition to trying to reach that goal, she finds herself literally trapped inside her mind, unable to remember who she is or where her convictions lie. Her transformation, though not blatantly extreme, was still very inspiring and moving. The other main character to note is Boax, the sorcerer from another land. It’s difficult to explain why he developed in the way he did since it would spoil, but let’s just say that he is a man of many layers. These layers are slowly stripped away throughout the movie, until we see who he really is, and who he has become through his actions. Though his development might be a bit different than Arete, it still is just as important in the long run. Other secondary characters, like the cook, also transform in some way throughout the movie.

I think a good way of measuring a characters score, when character development is present, is to think about the anime again and decide if you cared about the characters’ transformations and outcomes. In this case, the answer was yes, so that is a good way of measuring my score. At the end, I felt happy for some characters, sad for others, and in general, walked away with a happy feeling about the people that had been introduced to my life for that short period of time.
Overall
Princess Arete is a beautiful watching experience in both the audio and visual realms. The story is definitely subtle and slower paced, but as long as you can handle such a thing, this will be a treat for you to see. For those looking for an action flick, deep plot, or anything in between, check out something else instead. Viewers of slower, sentimental or intelligent anime would be ideal, as well as those who like anything from Studio 4C. I enjoyed Princess Arete, and you might too, so check it out.

Our story follows Princess Arete, who is confined in the castle tower under the instruction of her her father, the king. He demands that Arete should never have contact with the outside world until she meets a potential suitor for her to marry, and uses these suitors to bring him jewels and powerful magical items from a race of long-dead sorcerers in an attempt to win his admiration and the permission to betroth his daughter.

Because of this Princess Arete spends her days watching the world outside of her window. Arete sneaks outside to watch the common people live out their normal lives. One day, a sorcerer named Boax arrives in a fantastic flying machine and offers to take Arete as his wife, trying to transform her into a proper princess. As Arete sit locked in Boax’s dungeon, she soon realizes that there will be no rescue. If she wants to get free, she must discover how to break his spell and escape on her own.

Princess Arete is a lot more progressive than a lot of traditional animated princess movies, such as some of Disney’s filmography. There is no traditional prince coming to save the day, and no real heroics. Arete is the one saving herself, trying hard to figure out how to get out of the situation she is stuck in. It feels like a mix of the traditional Disney princess film and a lot of Studio Ghibli’s films, where our main female character can hold her own, but just on a smaller more minimalist scale.

The whole movie is beautifully put together. The art style, while more muted, looks fantastic, with it’s older European influence. The one thing that really stands out is the gorgeous soundtrack done by Oonuki Taeko and the late Origa.

My only real complaint about Princess Arete is the lull in the middle of the film. After all of the plot points and characters are set up, the middle of the movie spends it’s time not doing much, and it feels like both me and the characters in the movie are just waiting for the inevitable things to happen near the ending of the movie. While it’s slower paced, I can easily see a younger audience maybe getting bored with it depending on their sensibilities.

There isn’t much to say about this film with outright spoiling it, so I’m just going to use this last little bit to tell you that you should check out Princess Arete.