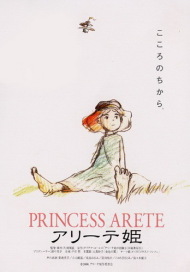 Innocent, naive, and locked in the castle tower since birth, Princess Arete wants nothing more than to escape the royal life and live as the commoners live, and to see things that she has only dreamed about in her books. One day, her wish is granted -- though under less than ideal circumstances -- by the sorcerer Boax, who charms her into becoming his wife. On his flying machine from the days of magic, Arete embarks on a mystical journey full of discovery, enlightenment, and wonder beyond belief...

Our story follows Princess Arete, who is confined in the castle tower under the instruction of her her father, the king. He demands that Arete should never have contact with the outside world until she meets a potential suitor for her to marry, and uses these suitors to bring him jewels and powerful magical items from a race of long-dead sorcerers in an attempt to win his admiration and the permission to betroth his daughter. Because of this Princess Arete spends her days watching the world outside of her window. Arete sneaks outside to watch the common people live out their normal lives. One day, a sorcerer named Boax arrives in a fantastic flying machine and offers to take Arete as his wife, trying to transform her into a proper princess. As Arete sit locked in Boax’s dungeon, she soon realizes that there will be no rescue. If she wants to get free, she must discover how to break his spell and escape on her own. Princess Arete is a lot more progressive than a lot of traditional animated princess movies, such as some of Disney’s filmography. There is no traditional prince coming to save the day, and no real heroics. Arete is the one saving herself, trying hard to figure out how to get out of the situation she is stuck in. It feels like a mix of the traditional Disney princess film and a lot of Studio Ghibli’s films, where our main female character can hold her own, but just on a smaller more minimalist scale. The whole movie is beautifully put together. The art style, while more muted, looks fantastic, with it’s older European influence. The one thing that really stands out is the gorgeous soundtrack done by Oonuki Taeko and the late Origa. My only real complaint about Princess Arete is the lull in the middle of the film. After all of the plot points and characters are set up, the middle of the movie spends it’s time not doing much, and it feels like both me and the characters in the movie are just waiting for the inevitable things to happen near the ending of the movie. While it’s slower paced, I can easily see a younger audience maybe getting bored with it depending on their sensibilities. There isn’t much to say about this film with outright spoiling it, so I’m just going to use this last little bit to tell you that you should check out Princess Arete. </div>