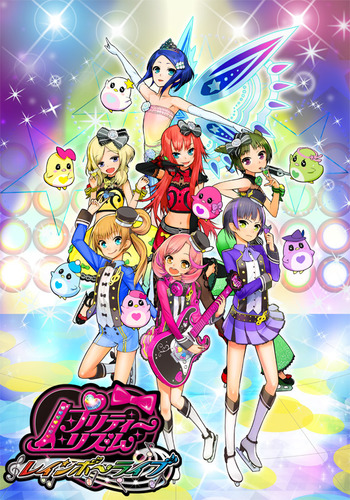 This is an anime I watched when I was younger...

One day I was bored and had nothing to do...I was searching the anime browse,

this once again when I was younger it was pretty complicated...to be fair.

seemeed lame and weird which is suprising.

could barely understand any of the story....

So I think it might be confusing for younger children..

I'm going to keep my review short because I don't want this to contain spoilers or discourage others from watching it.
Pretty Rhythm: Rainbow Live is a good anime, though not one of the best.

This anime is family friendly and is targeted mainly towards children, so the storyline is very simplistic and barebones for this reason. However, I did not feel like I got to see much plot until toward the end of the series. It was very vague at first but still enjoyable. I don't think people watch idol anime for the plot anyways, so I wasn't surprised to find that the story wasn't super deep.

I really enjoyed the style of the animation. It was fun, colourful, and unique. Not every frame was refined and perfect, but I found the charm of this anime to be quite pleasant.

As for the sound, it's wonderful! Many things get lost in translation between Japanese and English so it is understandable that some of the English lyrics may not have made much grammatical sense to a native English speaker. Despite this, I found myself bopping my head along to all of the songs, especially Wakana's song. The opening songs are wonderful too. Really upbeat! I don't have much complaints about this one other than the English wordsalad.

For a children's anime, the characters were surprisingly good. We really got to see the inner turmoil of these characters and I can honestly say that I cried at times. A few of the characters annoyed me, but I really enjoyed peeling back the 2D layer and seeing the characters' lives and the interactions between family (particularly Wakana's and Beru's!). I do have to say that the love triangles are rather annoying and poorly done. It almost seems a little forced, as if the creators were trying to make sure that every female character was paired up with a guy. There were love triangles everywhere to the point where it got tiring.

Overall, it's a pretty good anime, especially if you're looking for something with sick bops.