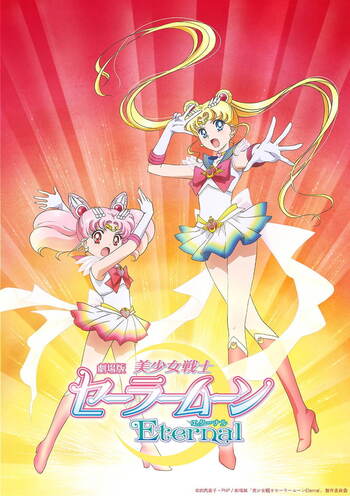 If you're looking for manga similar to Pretty Guardian Sailor Moon Eternal Movie 2, you might like these titles.

Minako Aino is a typical teenager who's great at sports and loves gorging on junk food. But when danger is afoot, she can transform into Sailor V: Champion of Justice! A shady organization called the Dark Agency is hell bent on taking over the world, sending waves of energy-sapping pop idols and video games to achieve its goal. Along with her talking cat, Artemis, and trusty compact mirror that can reveal a subject's true form, Sailor V must overcome all challenges and save the world!

A thousand years ago, The Dark Kingdom, led by Queen Beryl, attacked the Moon Kingdom. Utterly ravaged, Serenity, the Queen of the Moon, sent the souls of her daughter Princess Serenity, the members of her court, her lover and her guardians to Earth to be reborn. One thousand years later, the Dark Kingdom returns and begins to steal energy to wake its own dark Queen Metallia. Sensing that evil forces are nearby, Luna, a guardian of the princess, finds the bumbling and lazy Tsukino Usagi and awakens the soldier within her known as Sailor Moon. While they battle evil and search for the other sailor senshi, Sailor Moon must learn how to be brave, gain strength and search for the Moon Princess!