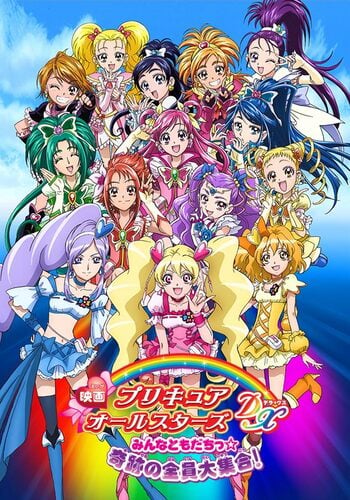 If you're looking for anime similar to Pretty Cure All Stars DX: Minna Tomodachi - Kiseki no Zenin Daishuugou, you might like these titles.

When the DokiDoki and HappinessCharge PreCure teams investigate a case of children being trapped in their dreams, they find the cause is a tapir fairy who wants her son's friends to stay with him forever in the dream world. To keep the Cures from interfering, she traps all of them in happy dreams of their own. All the PreCure teams listed in the fairy handbook that is, which didn't include the new HappinessCharge team. It's up to Lovely and Princess and their fairy friends to defeat the nightmares and rescue everyone.

A mysterious girl named Sakura appears before Cure Whip. Sakura comes from another world, where one day the evil Karasutengu crow-billed goblin, bent on stealing the world's pretty things, emerges and kidnaps her friend, a fox named Shizuku. Sakura seeks out the Precure for their help.

This parody intro for a spinoff of the Mahou Shoujo Madoka Magica series was released by Nitroplus as an April Fool's joke.