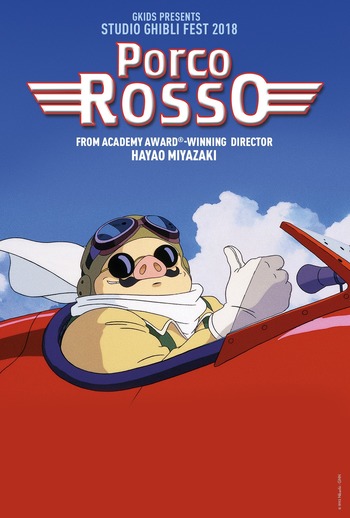 Good, but as usual you have to overlook a few things.The story here is heavily driven by the characters, and if you look at it as a singular entity it seems rather thin. The pacing, or lack of any, may not be to everyone's liking but it is not as serious as some of the other films.

Studio Ghibli-y, excellent. You get the real feeling that Hayao Miyazaki is a real plane nut and has taken great pleasure in the animation. Everything looks so good and the detail iinvolved is breathtaking.

The music is extremely suitable. It matches the air and mood the filmcreates amazingly well. The voice acting is good but feels strangely detached

Very well done. The driving force of the film. The characters interact amazingly well with each other and you are left in no doubt at all that all of them, including the half-pig one, could exist.

Superb, as you would expect. A little different from the other Ghibli productions, almost all of this could have happened, and is in no way worse off for that.

Porco Rosso!!!!! as guessed from the name, based around Italy/ the adriatcic sea, based around sea planes/ aviatyion, etc - Il'l admit i actually got this a few months back, but hadnt watched it till now, mostly because i hadn't heard much about it other than brief plots and some reccomendations, but i can defs say this is one of the most underrated Ghilbi films, and i enjoyed it as much as Spirited away, howls moving castle, and princess monoke! ;D

Real old school story, a lot of it imo is really open to interpretation, and even at the end some things arent really answered (or answered clearly enough to get the first time around) defs one to watch at least twice ;)

Without spoilers....basicially revolves around a man turned into a pig, working as a sea pirate bounty hunter, most of it based on the sea, dog fights, and aviation scenes, and his relationship with gina the sea restraunt owner, which goes deeper than it first seems

also a lot of aviation scenes/"dogfights" and he also visits milan  for a short while where he meets theo (KAWAII!!!!) , who joins him for most of the movie ;)

anyway spoilers being spoilers cant reveal too much ;)

Again, mostly based on the sea, the Adriatic, and some parts in italy, has a real european/"old school" feel to it, animation in line with pretty much everything back then in the 90s'? not exactly sure but yeah still pretty good :D love the settings :D and then also saw the "engine scene" which i now know where the recent movie "Redline" was influenced from ;)

definately fits the part 100% - great music, but just nothing that really "grabs you" ( e.g. compared to spirited away's themes ) still, not taking anyting away from the music - Great themes :D

EDIT: gonna go back here ;) after rewatching porco like 3 times over already, and downloading few of the songs, gotta admit theyve grown on me ;D love 'toko ni wa' ;D and the french song sung by gina ;D so upgrading sound to 10 ;)

10 all round imo ;) every charachter serves thier purpose, whearther its the simple, comedic, funny sea pirates, or the in depth and complicated relationship between gina and porco, or just the cuteness and straightforwardness of theo ;) every chatachter does thier bit perfectly ;D

9.5/10 - Great movie, enjoyed it heaps ;D if your a fan of old school stuff, italian/european settings, action, etc, then youl'l definately enjoy it ;) defs one to watch a few times over ;)

Story- We're missing an explanation as to how Porco became a pig. The end of the film also seems rather abrupt. However, the general plot is good. We have a picture of how difficult war makes life. We have characters defying odds, and we have a love story.

Animation- if not for the gorgeous animation, this film would not be worth watching. The planes, the environment, and buildings are breathtaking. Action scenes are well choreographed, as are character movements and expressions.

Sound- I think the French song could have been sung better, but the overall soundtrack fits the film well. The English actors also fit their characters well.

Characters- It's difficult not to love the characters of this film. They all have such vibrant personalities. I love Fio's ambition, Porto's heart, and Piccolo's wisdom.

Overall- good story with animation so beautiful, it makes me want to cry.

This movie was fun to watch, but it could be a little slow at times, and the ending left me very disappointed.

I had no idea what to expect when I started this movie, but that scene with the pirates and the schoolgirls had me laughing, and it really set the tone for the movie--that there would be moments of action, but it would often be coupled with humor.

The main character of Porco bored me a bit, as we rarely got insights into his emotions, and most of what was there came from reading between the lines. However, Fio was a great addition, and I had a lot of fun with her character and how she handled what was thrown at her.

The story itself was fairly simple, but there's just something about the Studio Ghibli movies that makes flight into a magical thing, and Fio was an endearing character, so the movie kept my interest.

I will say I was a little shocked by the ending. You wait almost the entire movie for a certain character to get what she wants, and the ending tells you it's not going to tell you... So, while I enjoyed the rest of the movie, I ended up feeling cheated when the end credits started to roll.

So, overall, Fio was a fun character, the pirates could be rather entertaining at times, but Marco wasn't a very interesting main character, and the movie's story could feel a little slow at times. If I ever watch it again, it would be soley for of Fio and the pirates.