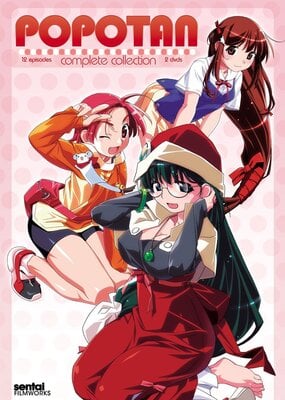 Imagine a mansion with a Christmas goods shop that appears out of nowhere, housing three beautiful sisters and a robot maid, all with very different personalities and figures. These sisters are looking for information that they can only acquire from "popotan," their term for dandelion flowers. After acquiring a hint of this information, the mansion and the girls vanish. Their travels take them through many places, and they meet a varied cast of characters during their quest, but what exactly is this information they're searching for so desperately?

Okay, first off, not gonna lie, I selected this story because it was tagged for nudity. That being said, this is one of the very few stories I have ever watched that could not be saved with bare female breasts. For most of the series, you don't really know what is going on because the characters themselves don't seem to know what is going on. They know they are searching for this one female who will apparently give them all their answers but (spoiler alert) no answers are forthcoming when they finally meet the subject of their quest. Further, the ending reveals that the subject of the quest is the quest. These are hours I will never get back. It isn't so much bad as it is boring and pointless. Just to top it all off is the highly inappropriate behavior and handling of the underage kids.

-Story- My main quarrell with the story of Popotan is that it has an extremely slow start in my book. I felt that the series didn't really get interesting until around episode 6, which is about half-way through the series. Also for a show that claims to be a comedy, I did not find it very funny. Most of the "jokes" were about the breast sizes of the various characters, and they all fell flat (no pun intended).  I was also a little upset by how there is little to no way to tell what time period the characters are currently in, which is more of a curse than a blessing in this series. I'm just glad they didn't do the polar opposite and make it completely obvious what time period they are in to the point that its just plain cheesy. As well as the slow start, the story itself wasn't the best afterwards.I found it to be clunky and slightly incoherent. On the positive side though, it did provide a look into the human condition and makes one wonder about what truely makes one happy. Also the emotions of the characters as they meet new friends and leave them seemed somewhat genuine. -Animation- I found the animation a little lacking. There were several still shots used throughout the series and I found many of the backgrounds to be bland and generic. The action scenes that were in the show seemed stiff and uninteresting. -Characters- I felt that the characters were the strongest asset of Popotan, even though there still were some flaws. I found the main characters to be slightly bland, with Ai just being soft-spoken and polite, Mai being an angsty teenager, and Mii being an overenergetic kid. What saves these characters from total damnation in the pits of bland character, is that their emotions seem genuine as they meet and leave people every time they jump to a new place and time. I also found the characters that they meet along the way to be good as well. -Overall- While I can't say that Popotan is terrible beyond redemption, I can't say it was good either. There is just too much wrong with Popotan for me to recommend it, and not enough right to fix that.

Greetings fellow anime viewers. Its RandomRedneck again, giving my thoughts on another anime. For this review, I tackle a show I only sought out because it was on NetFlix, and I like titties, but stuck around because...well, because it's a pretty good show. Popotan. Let us begin, shall we? STORY The story goes as such. Three girls, Ai, Mai, and Mii all live in some strange mansion, which doubles as a Christmas shop, all year long. They are in fact, time travelers, searching for the titular Popotan's(which are sunflowers as far as I can tell) and looking for some strange woman. The beauty is, they never really reveal how the girls came together, or why they travel through time like they do. Normally that would annoy me, but they pull off the un-reveal rather well. ANIMATION Animation is alright. Its kinda standard sometimes, but the scenes of the house leaving the current time it's in are pretty awesome to watch. SOUND Sound is a good selling point for this show. The opening and ending theme(Especially the ending theme) are catchy as all get out. I watched it in English, and I thought the voice actors did a pretty decent job as well. And they got this pretty piece of music they like to play when there's a dramatic scene. CHARACTERS We got 3 main characters. Ai, Mai, and Mii. And their robot...cyborg...some kind of mechanical something housekeeper/asskicker, Mea. Oonagi doesn't bear mention, because she doesn't really do anything important. Aside from some shared addiction to lounging in the bathtub(Seriously, there isn't an episode where these chicks don't find some excuse to lounge about naked in hot water. Even Mea gets in on it sometimes)  they all have different personalities. Ai, soft spoken, huge boobs, horrible cook, real motherly and all that, Mai, the tsundere tomboy, with some serious emotional issues, and Mii, the annoyingly chipper, token loli. We've also got Keith, who only seems to exist to be a total prick. You won't like Keith, trust me. Overall, characters are another good selling point to this show. OVERALL Popotan definitely isn't for everyone, but if you can look past the constant furo scenes, you'll find a show that's surprisingly good for what it is. Popotan, check it out. You won't be sorry. Thank you. Yours truly, RandomRedneck. 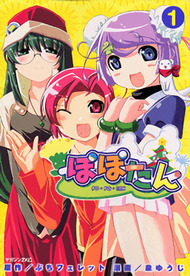