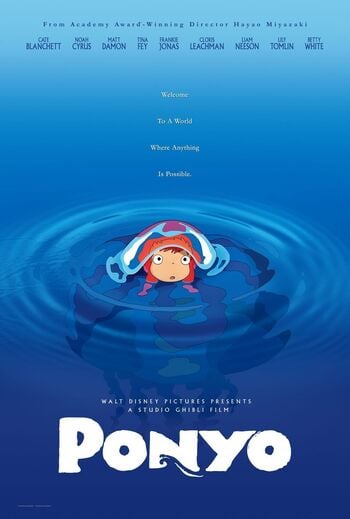 StoryAfter several movies from Hayao Miyazaki that have been both narratively and visually complex, Ponyo on the Cliff by the Sea feels like a return to "classic" form. The film is simpler both in its plot and animation style, having more in common with My Neighbor Totoro than any of the great director’s recent efforts. The difference is so pronounced, in fact, that Ponyo often feels like watching a time-capsuled Ghibli from the late 80s. The film's story is one of Miyazaki’s simplest yet, and anyone with even a decent grasp of Japanese will be probably be able to watch it without subtitles. However, while this extreme simplicity may end up being a turn-off for many viewers, there is a lot to love in the no-frills story involving the relationship between Sousuke and the adorable Ponyo. In the beginning, the film’s slice-of-life interaction between the two bears a definite resemblance to what was done last year in Kappa no Coo to Natsuyasumi, but the anime diverges considerably after that - and much for the better. From its normal, everyday setting, Ponyo eventually blossoms into a wonderfully imaginative work that is as delightful as it is unpredictable. That said, not everyone will be able to enjoy the film. One of the common criticisms of Spirited Away is that it more focused on showing cool visuals than developing an intricate storyline, and Ponyo also bears that flaw to a certain extent. Moreover, Ponyo is childish and straightforward, and will hardly convince would-be detractors prepared to dismiss Ghibli as “for kids.” Nonetheless, those who don’t automatically assign simplicity as a fault should heavily enjoy Ponyo’s adorably creative narrative, regardless of their age.AnimationVisually, Ponyo is a large step down in complexity from that of Howl’s Moving Castle. That's not to say that the animation isn't great, however, because it is. At times, the underwater scenes in Ponyo are so vivaciously animated that the images seem to bubble off the screen. There is a sense of life and wonder that, by comparison, feels all but missing in most productions today. Vividly inventive and at times breathtaking, there are countless scenes that only Ghibli's loving care could create, and discovering them is pure, undiluted joy.SoundDisney outdoes itself in its English localization of Ponyo. From the pedigree of the voice actors involved, one would expect greatness, and the endless A-list of stars doesn't disappoint. In particular, Liam Neeson and Tina Fey are fantastic, infusing warmth, humor and energy into roles that are comparatively flat in the Japanese version. As a whole, this is one of the rare English dubs that exceeds its Japanese counterpart in quality. The instrumental soundtrack, composed by the ever-masterful Joe Hisashi, works wonders at accentuating the action on the screen. One piece that plays during a particularly dramatic flood scene evokes Wagner’s classic “Ride of the Valkyries” to awe-inspiring effect.CharactersLike many other Miyazaki films, there is a notable lack of villains in the entire production. Characters that are initially menacing turn out to have well-meaning intentions, and ultimately the conflict is not against any one evil so much as it is against abstract entities like pollution or ecological imbalance. This distinct lack of direct conflict is refreshing, and is one of the many reasons for why the director's work stands out from the rest. As far as protagonists go, the chipper Sosuke is fine but ultimately takes a backseat to the brilliantly developed Ponyo, who manages to delight and endear every time she has a chance. The supporting characters are charming, albeit relatively undeveloped. Ultimately, this isn't the best cast that Miyazaki has crafted, as it lacks the depth and uniqueness of some of his other works. With the exception of Ponyo herself, the characters all feel somewhat incidental, and some work probably could have been done to fill them out more. Still, the characters are more than serviceable in moving along the plot, and never feel like they're detracting from the quality of the film.OverallAs a whole, Ponyo is a wonderful anime and the first to truly "wow" me this year. The film is also a welcome return to form for Ghibli after the disappointing Howl's Moving Castle and almost offensively bad Gedo Senki. While Ponyo isn’t quite on the level of Miyazaki’s best works, it’s nonetheless an instant classic that will continue to be loved long after its theatrical release is over.

This movie was my movie I would watch with my Dad as a small child, so it's very special to me. I liked the story and they did a good job of basing the story off the Little Mermaid. Now hat I saw that I can see the similarities but Ponyo is younger and Studio Ghibli put there on twist on the story. The animation was the typical Studio Ghibli stuff. I liked the song at the end and I never forgot it. The characters were original. This was a very nostalgic movie for me and I thought it was very enjoyable.

This movie gives a bad name to Hayao Miyazaki and Ghibli Studios as a whole. It's plotline is simple and the struggle seems far too easy to overcome. It's an extremely happy-go-lucky story that simply doesn't fit with the typical Ghibli style. It is not only strongly geared toward younger children, but also rather boring at times. However, as it was directed by Hayao Miyazaki with Joe Hisaishi composing the music, the animation and sound quality are just as good as any other Studio Ghibli movie. Still, I do not reccomend this movie to anyone who appreciates Ghibli's better works. 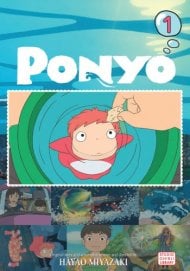