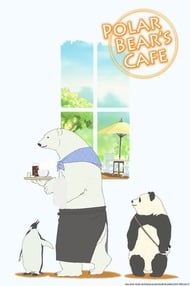 I love this show! I would describe it as a slice of life comedy...  but....  from the perspective of a few animals living in an otherwise normal society.  The main three characters as seen in the intro are Panda, Polar Bear and Penguin. The episodes tend to have two main storylines each (before and after the break).  The stories are wonderfully simple and often based around one of the characters,  Panda is the star, but there is also quite a focus on polar bear and penguin and other characters that come and go.  They also integrate some popular japanese customs and festivals into the plot lines. The writer / producers have a really fantastic sense of humour, I don't know how they come up with the stories, but they have a great way of capturing the funny side of the individual character personalities and the situations..  There are some slapstick moments and some Japanese word play too.. I think this anime is fairly unique..   I haven't seen anything else mix such a lovely style and humour..  I think this show integrates all the things I love about Japan, the cute style, the humour, the festivals and culture etc. I'd recommend this strongly as a feel good show, if you are having a bad day or feeling a bit down, watch an episode and you will most likely be grinning from ear to ear :) All I have to say is... Don't Suck Me !   (watch it and find out).

Sometimes you just want to watch something relaxing to unwind from the stress of the day or to just spend some time watching something nice that isn't too complicated or hard to follow. Something comfy. If that sounds nice, then this anime might just be for you. Shirokuma Cafe, or Polar Bear Cafe in English. It's a slice of life, but instead of the characters being human, most of them are animals.The show follows the daily life of a young and incredibly lazy panda named Panda. He is constantly told by his mother to get a job. One day, Panda wanders outside after his mother constantly telling his to quit being lazy, he stumbles across the titular cafe, run by the enigmatic Polar Bear, a soft-spoken polar bear. Along with Polar Bear is his friend, a sarcastic penguin named Penguin, and various other animals from the nearby zoo, along with a human girl named Sasako, who gets hired to work there soon after Panda first discovers the cafe. Soon, Panda stumbles into being hired by the nearby zoo, and he along with the friends he made at both the zoo and the cafe, soon find themselves going on all sorts of misadventures and they hang out with each other.Like I said earlier, the show has an easy going relaxing feel to it. The whole show gives off nothing but nice vibes. Most of the humor is slapstick and puns. The puns might not all work 100% in English, but the puns are pretty easy to figure out (and are explained to you depending on your subs). The art is simple and fitting of the shows tone. Everything looks lovely and appropriately adorable, and thankfully not too sickly sweet.All of the characters are simple, but they work off each other really well, and by the end of the show, they all feel like they're best friends who have known each other for a long time. Along with the amusing main characters are several secondary characters that pop up from time to time, and they all stand out. Ranging from a group of penguins who want to have their own trading cards to promote themselves, to a biker Grizzly Bear who owns his own bar, to a Llama who often has people confuse him for an alpaca and wishes people would admire and adore him.While the whole show is a whopping 50 episodes in length, don't let that been off-putting. There isn't any real in-depth on-going stories that you need to pay too much attention to. Yes, there might be re-occuring characters that might bring up an event or two when they pop up, but there's really nothing you would have to keep track of. Despite it's length, it does feel like it goes by fairly quickly.There isn't really a whole lot to say about Polar Bear Cafe. Not because there is anything to spoil, but because it's such a simple show that going in depth with it isn't really feasible. If you're the type of person who is just looking for something wholesome to watch while you're relaxing, then Polar Bear Cafe is for you.

Okay, so far I've only watched 7 of the 10 episodes that are out so far, but I think I am getting enough of the gist.  It is possible that over time the quality will diminish, but I will take my chances and write this premature review. Basically I want to know what drugs these guys are on, because I want some. Story - each story is simply a premise, a situation for the writers to dig out some comic gold. There are some through-lines, but there is no overriding plot so far.  It's very refreshing to tune in to.  This is a comedy, and more often than not, the gags are so over-the-top, they pass beyond stupid and become cackle-worthy.  There is definitely a large dollop of insanity of a somewhat psychedelic nature. Animation - I like the art.  It's right for this show.  It's like candy. Sound - Sound effects guy is working overtime.  Sometimes I even think it might be too much!  The opening song is adorable. Characters - The voice acting is terrific.  The characters are a big part of the winsomeness of this show, too.  Polar Bear is sort of our parental figure - he's been around the block and knows the ways of the world, and warmly cares for his friends.  Panda is young and unworldly - he doesn't know how to take care of himself and he likes cute things, especially pandas (he is well aware of his own cuteness and relishes it.)  Penguin is worldly but sarcastic, lacking the emotional maturity needed to feel secure in empathizing or sharing his feelings. I particularly enjoy Panda's befuddled cuteness and Penguin's sarcastic commentary, and I love their voices, too. Overall, this is a cute show with a childish demeanor but a grown-up sense of humor.  It is weird, funny, light, koolaid fun. 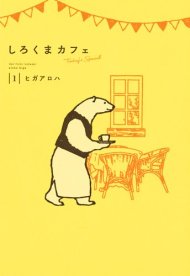